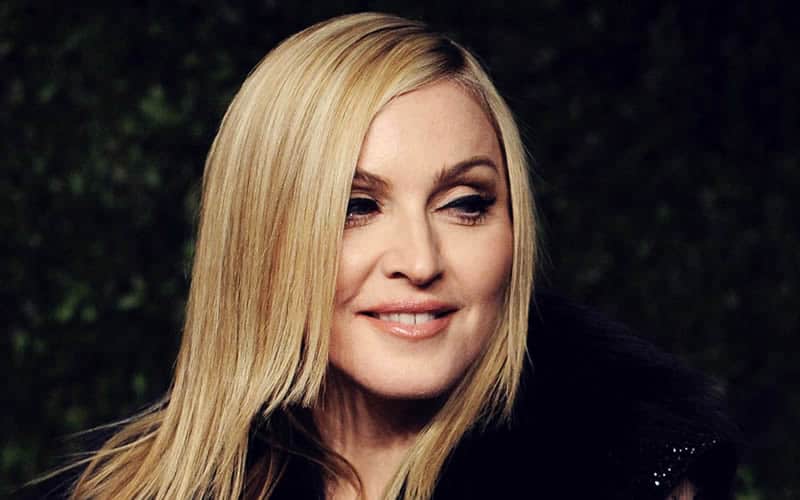 Madonna, the Queen of Pop, has a long and illustrious career as a music artist.

Since she became popular in the 80s, the “Material Girl” hitmaker has been challenging boundaries in both music and style.

But following decades of makeovers, fans have often wondered if Madonna had plastic surgery to improve her appearance. Similar noises became even louder as she passed 60.

After all, she still looks incredible these days.

To determine if Madonna had any work done, we went back to her past and analyzed many of her photos. Here’s what we found:

Did Madonna have a facelift? 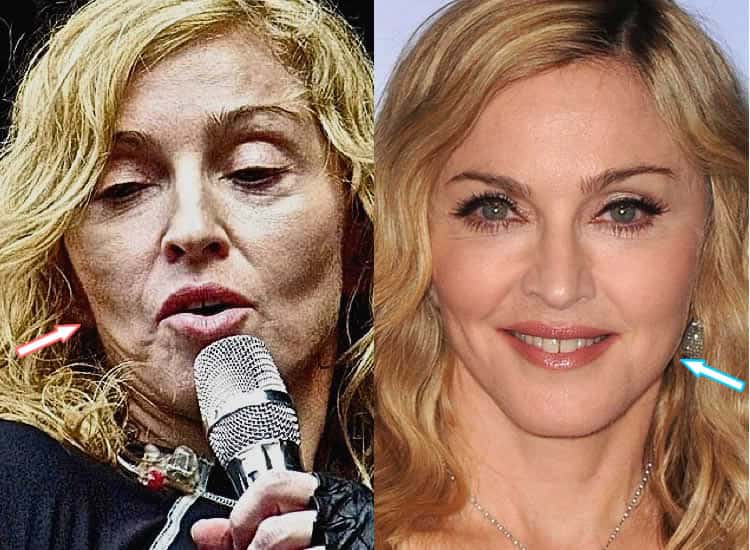 Madonna’s face has had some rejuvenation over the years. There was a period when her face appears to have more wrinkles. However, her skin became tightened when she appeared on screen a few weeks later.

This tells us that there is a good chance Madonna underwent a facelift procedure. She does look incredible!

According to another source, an expert said Madonna had signs of scars on the skin just behind her ears. This usually happens after a face or a neck lift. So I guess there is some merit to this speculation.

Has Madonna had botox injections? 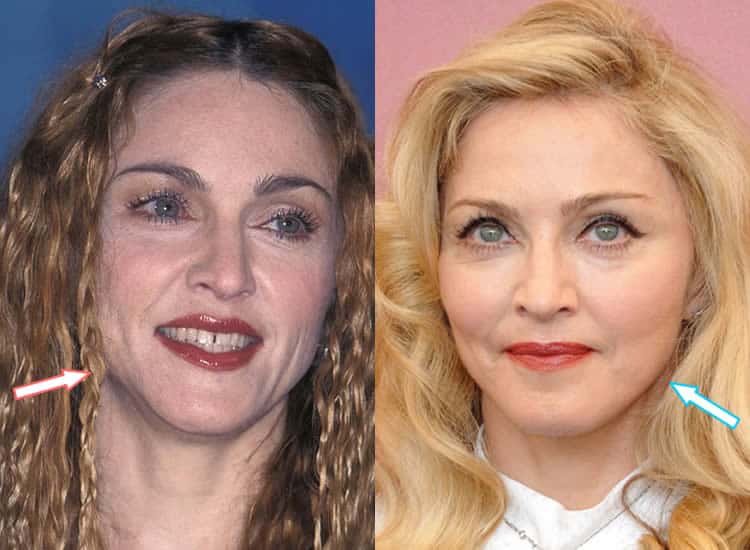 It’s obvious that Madonna’s face is less wrinkled these days.

There are also times when the singer’s face cheeks look slightly swollen as if she had gained weight. But when her body mass stays the same, this could be a sign of botox being use.

Even TV celebrity Sharon Osbourne, who confessed she gets puffy cheeks through frequent clinic visits, believes that Madonna gets her face done. On one of her talk shows, Osbourne said Madonna has telltale signs of a pillow face, where doctors put fat into the cheeks.

Did she get an eye lift? 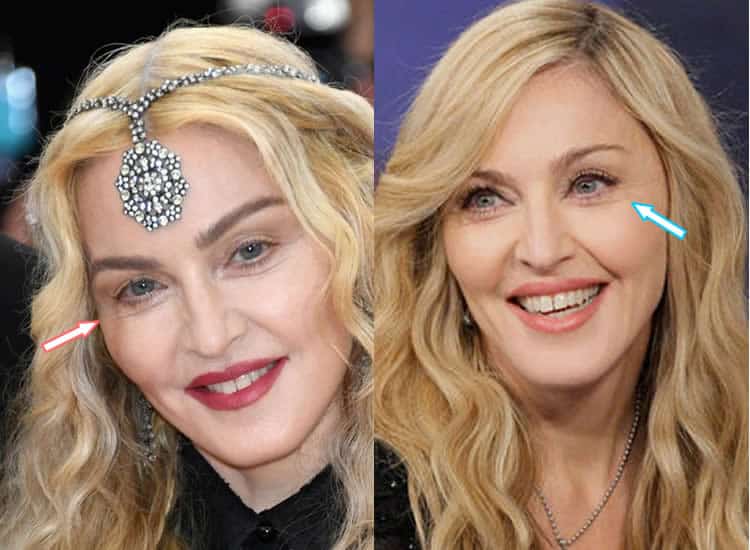 If you look at the “BEFORE” picture above, it appears that Madonna’s eyes were aging quite badly with sagging eyelids and heavy eyebags. Compare that with the “AFTER” photo on the right, you can clearly see that her eyes had been lifted and appear wider, rounder, and younger!

This tells us that Madonna might have had an eye lift to correct those aging signs.

If it’s true, I honestly think the surgery was done extremely well. 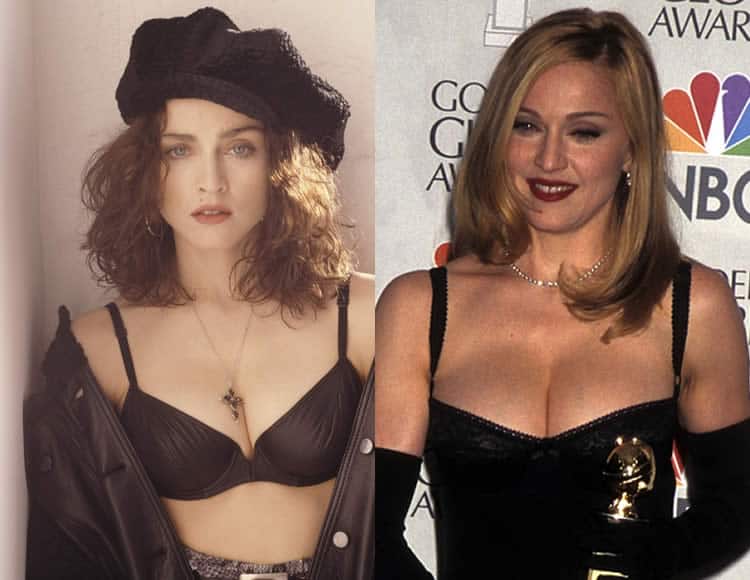 This was a bit of a difficult one.

If I’m honest, Madonna’s breast has gotten bigger over the years. If you look at the comparison photo above, her boobs looked smaller and doesn’t appear as ‘pushed’ inside a similar bra size.

However, her cup size seems to have changed as you can see from the cleavage.

Given that Madonna has similar fat ratios on her body in both of these pictures, the chance of her having a boob job is high. I just don’t think the small increase of weight is in proportion with her fuller chest here. She does look more busty.

Now, whether these are implants or fat transfer is up for debate.

What did Madonna do to her hands? 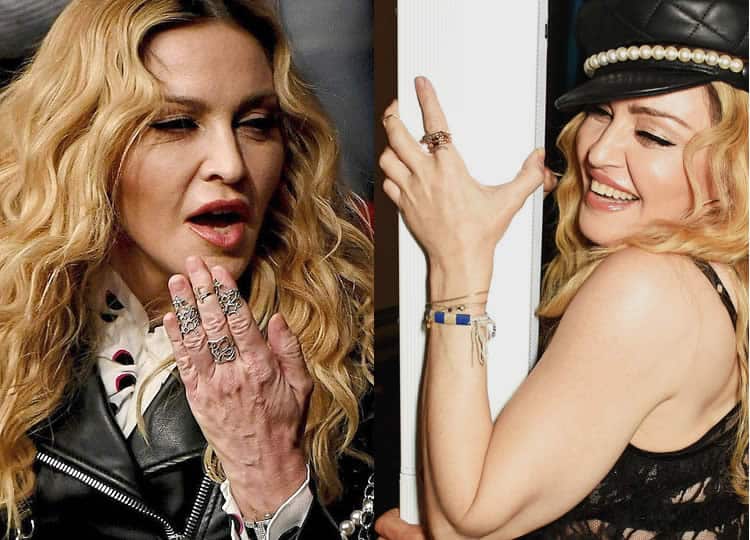 One of Madonna’s early signature style was wearing gloves.

Apparently, it had another purpose, as it was meant to cover her veiny hands. For the last four decades, people close to Madonna said that she was always insecure about how old her hands looked and her publicists have to make sure that those wrinkles were cleaned out in her photos.

If you look at Madonna’s hands above, you can see a lot of improvement over the years. While I don’t doubt that photoshop was used in some ways here, those wrinkly veins have miraculously disappeared.

So, how did she do this?

According to some experts, Madonna has regular redermalization mesotherapy sessions. It is a treatment originated in Russia, which involves injecting hyaluronic acid and vitamins to help the skin on the hands to produce more collagen to reduce wrinkles.

Madonna: Then and Now

Let’s take a quick look at Madonna’s transformation over the years. You will be surprised at how much she has changed.

An old baby picture of Madonna shows just how cute she is as a little girl. She had a big mole on her face, which made her look more adorable.

Can you believe it?

Madonna wore a wedding gown just like this when she debuted “Like a Virgin” and that image would later turn her into an icon.

Madonna had plain looking brown hair as a teenager. Despite the baby fat on her cheeks, she had a small face shape, which actually emphasized her gorgeous big eyes.

As an 18 year old, Madonna had a skinny body shape and a small chest size. She kept her hair short in the ’70s and already had this cool air about her, don’t you think?

The drastic transformation begins in the ’80s.

Madonna dyed her short hair blonde and wore heavy makeup. This really emphasized her cheeks and gave her a beautiful jawline.

The year “Like A Virgin” released in the 1980s, Madonna became one of the most popular pop stars in the world. She grew long hair and wore a lot of jewelry as part of her style. She kept the red lipstick and dark eyeshadows, though.

There have been talks about how she actually penciled the mole above her lips to make it more visible. Years later, this beauty mark would disappear as part of her reinvention.

The cone bra costume became Madonna’s signature look in the ’90s and she wore this outfit with the release of “Vogue.”

She changed up her look by dying her hair brown. Her 1990s look was all about chest-baring outfits but I guess when you have a body like her, why not?

Madonna marked turning 40 by landing on the Guinness Book of World Records as the lone female artist to have sold over millions of records. Her aging look, however, has taken some shine off it.

This was the year Madonna shocked everyone when she appeared at the MTV European Music Awards. Everyone thought she had a facelift because her skin looked so stretched, smooth, and tightened.

Radiant is probably the only word to describe the singer as she arrived at the Vanity Fair Oscar party looking like she’s never aged. What did she do?

Her busty frame, however, had people wondering if she had breast implants this year. The way she pushed her chest in this outfit certainly wasn’t helping.

They said that Madonna had lip injections here but I’m NOT buying it.

Some critics, however, said that she is using her skincare line as a ruse because she actually gets face fillers to look younger.

Has this woman changed in the last 10 years?

I didn’t think so either.

To tell you the truth, I think Madonna is looking better every year. This was evident from some of her transformation photos above.

At this point, it’s not even important whether Madonna has had cosmetic surgery or not. What’s important is that she looks amazing and I can tell she’s loving it!