Skip to content
Home » Did Ariana Grande Have Plastic Surgery? 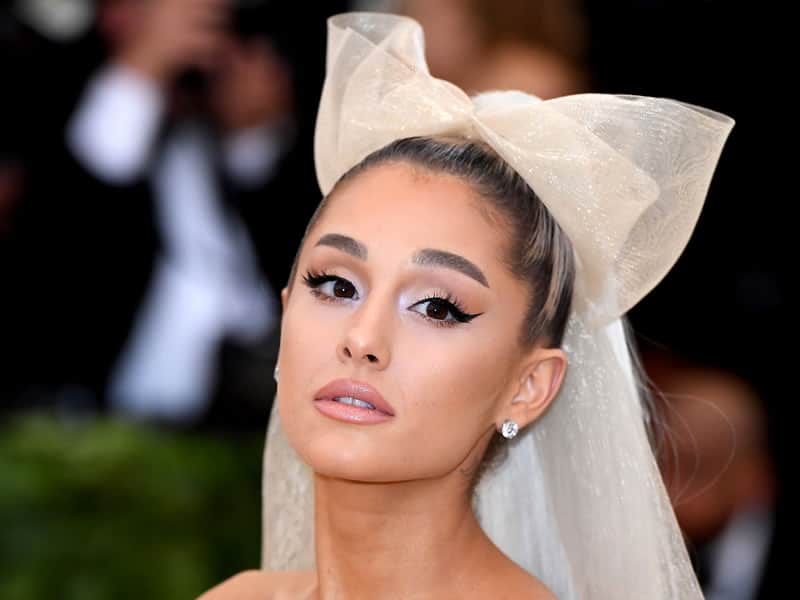 Twelve years ago, Florida-born Ariana Grande was just a young and struggling actress. The millennial star’s rise to fame is like a classic storybook about making big dreams and turning them into reality.

But as her fame took off, Ariana’s appearance drastically changed in front of the limelight. People started questioning whether plastic surgery played a part in her transformation.

After all, the singer is looking prettier and sexier every year!

So I guess it was only natural that people are going to speculate on what’s real or fake about her beauty. Just like we did.

To determine the extent of Ariana’s transformation, we needed to compare her photos. Let’s analyze the evidence below.

Did Ariana Grande get a nose job? 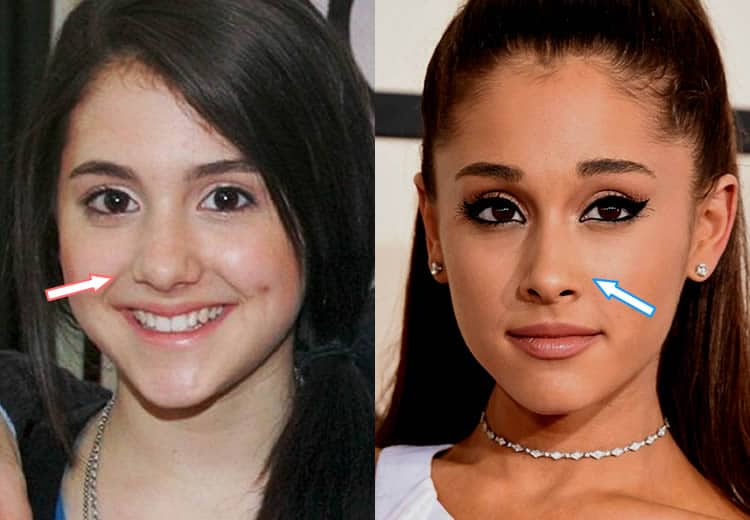 Looking at Ariana’s younger picture above, she clearly had a wider nose bridge and a bigger tip too. Today, however, her nose shape looks thinner and pointer.

Now, I could have easily said yes, the singer had a nose job, but the truth is Ariana was young and still had baby fat.

After factoring in her age, reduced weight, smile, and makeup, I’m going to say NO.

I don’t think Ariana had her nose done. Her nose simply looks slimmer because she has gone slimmer overall. And we all know how good she is with her makeup these days, right?

Has Ariana had a boob job? 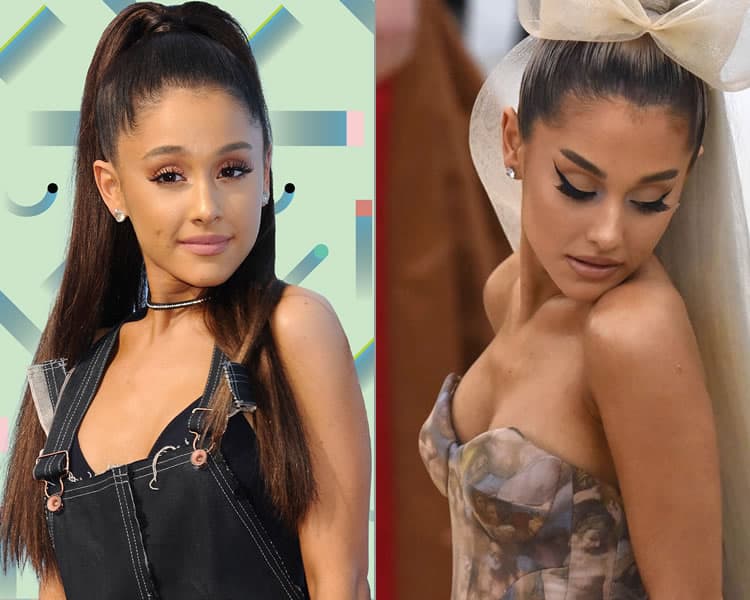 While I wouldn’t say her chest is completely flat, but for a woman with a petite body, it’s not all that surprising to have small breasts.

Sometimes, you may see her in push up dresses such as this one, but this is simply the case of a good outfit.

From this angle, they may look like breast implants to some people but once you see her other photos from the same event, you can tell it’s only a good shot, nothing else.

Did Ariana have butt augmentation? 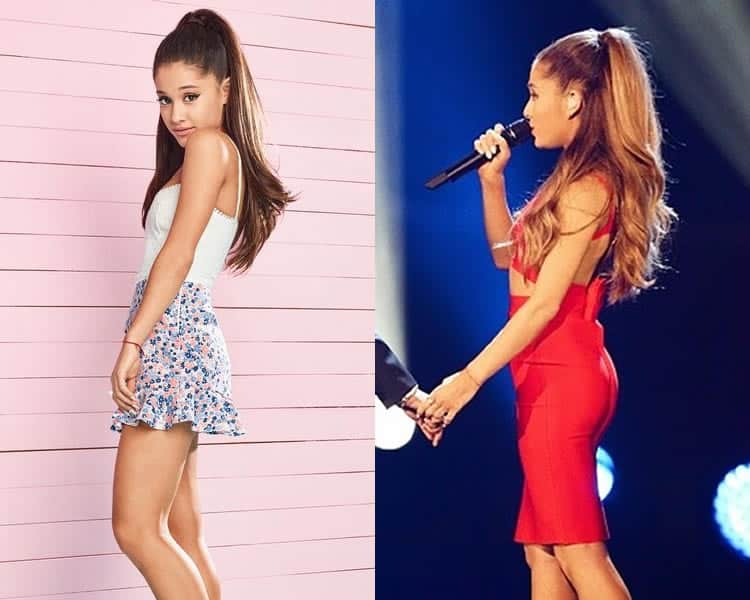 Due to her thin and small frame, Ariana’s butt simply can’t compare to the likes of J Lo, Kim Kardashian, or even Beyonce. The girl, however, can hold her own sexy physique in a different way.

Ariana once shared a butt selfie on her Instagram that drove fans wild. Clad in tight-fitting jeans, her bottom still looked amazing despite the small size.

From these comparison pictures, I honestly can’t see any differences to her buttocks. So, I don’t think she’s ever had a butt lift or anything remotely close.

It will look kind of weird if Ariana Grande started twerking on MTV with a massive rear end, don’t you think?

Does Ariana have lip injections? 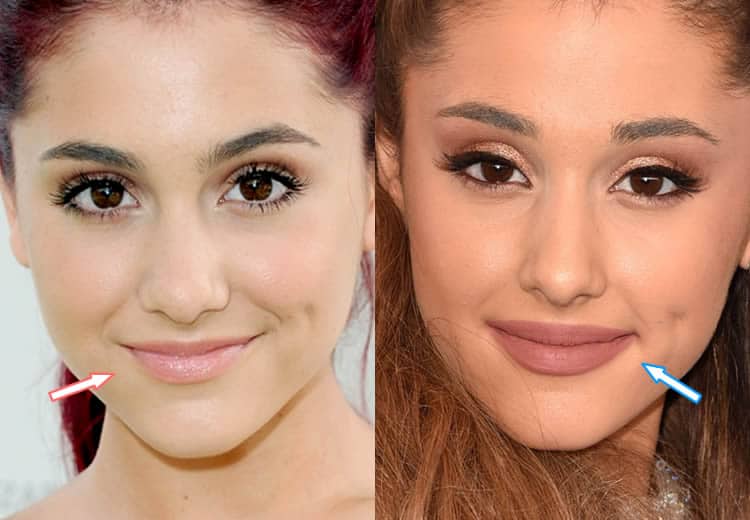 I’ve lost count on the number of times that people were calling Ariana out for having lip injection. The noise was particularly loud during the release of her “Dangerous Woman” video, which made her look like a Vixen.

But if you look at Ariana’s younger pictures, the girl had decent size lips.

Although I wouldn’t be surprised if she has tried lip fillers at some stage, I think it’s just makeup most of the time. You can tell how her stylist use lip pencil and gloss to create a plumper look.

Has Ariana Grande had eyelid surgery? 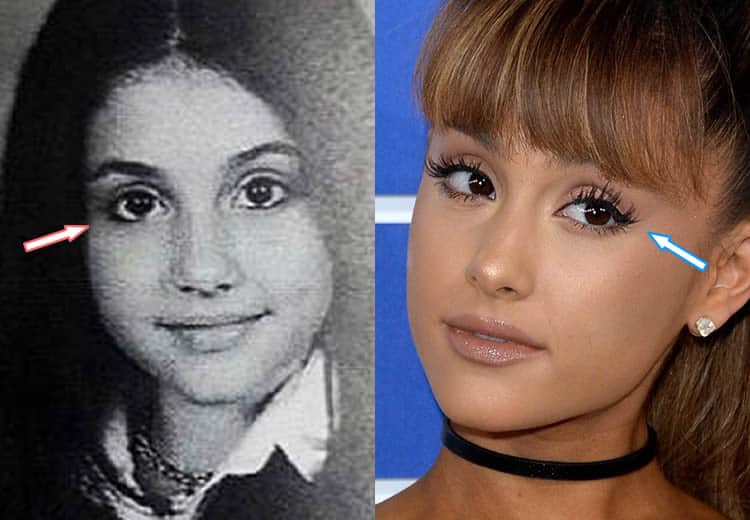 I think everyone agrees that Ariana Grande has beautiful eyes.

So, naturally, there are always going to be people asking if she had an eye surgery to change her eye’s appearance. I’ve even heard talks about the singer having double eyelid procedure because she wanted bigger eyes.

But to me, these are just rumor.

If you look at her childhood picture on the top left, it’s clear that Ariana already possessed beautiful double eyelids as a child. Her eye shape looks huge too. They are big, round and sparkling.

Sure, the singer’s eyes do look different these days but if you think about it, have you seen pictures of Ariana without her long eyelashes?

Well, there you go.

Did she have liposuction on her legs? 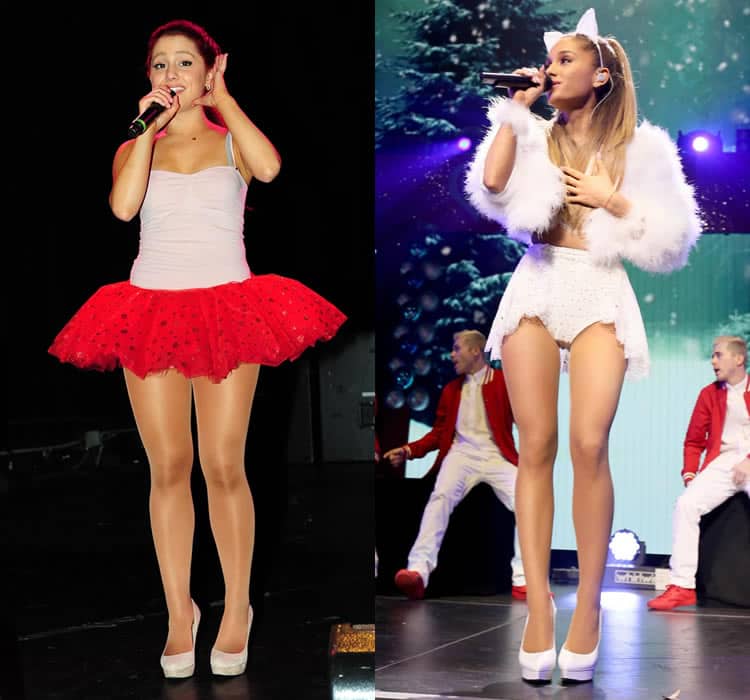 In case you didn’t know. Ariana became a vegan by choice and she gradually lost weight. As a result, both her thighs and calves look a lot more skinny compared to her “Before” photo above. This also made them look longer too.

There were rumors about Ariana getting liposuction to improve her leg’s shape but her personal trainer, Harley Pasternak, told Look magazine that Ariana’s thigh lift is actually a series of workouts, not a cosmetic procedure.

Ariana Grande: Then and Now

Let’s see how the superstar has changed through the years. Her transformation will certainly be an interesting one.

As a baby, Ariana Grande had chubby cheeks and big eyes. The star also had a cute camera face that some babies lack. She’s definitely not camera-shy.

Ariana in her childhood days

Did you know that Ariana’s natural hair color is dark brown?

She also had a big front tooth which some calls it the rabbit tooth. Those natural dimples also made her face super sweet.

For the record, the star has a prominent chin and this elongated her face shape. So anyone who thinks that she’s had a chin implant can put them to bed.

During her stint on Nickelodeon, Grande had red hair for her role as Cat Valentine in “Victorious”.

I think this hair color looks good on her.

After working as an actress, Ariana, now 18 years old, wanted to focus on her singing career. She put some weight on and showed a little fat when she graced the red carpet for the release of “Put Your Hearts Up.”

Her dress emphasized her bigger arms and broader shoulders. Given her “staying slim” standards, her upper body definitely looked different then.

Her eyes also looked different with some suggesting an eye lift. Her brows also rested higher, which sparked speculations that she had a brow lift also.

Performance-level Ariana sung at the AMA wearing a one-piece bodice that highlighted her toned and great body.

The singer wore high heels that elongated her legs. She covered up her exposed skin with stockings that matched her skin tone. A hair wig completed her look.

The “No Tears Left To Cry” singer joined other big-name stars at the 2018 Met Gala in New York. Although she picked an elegant dress and matched it with a giant hair bow, it’s her bust size that caught the public’s attention.

It’s always posts like this that gets people talking. She’s done her lips, or her nose is not natural, blah blah blah.

Okay, I think I’m second-guessing myself here too.

Like many young stars, Ariana has been quiet about her cosmetic surgery speculations.

Personally, I don’t think she’s had any work done. That’s probably why she doesn’t feel the need to explain herself. Natural beauty or not, she is still one of the most gorgeous and talented stars we have today.