Skip to content
Home » Victoria Beckham: Before and After 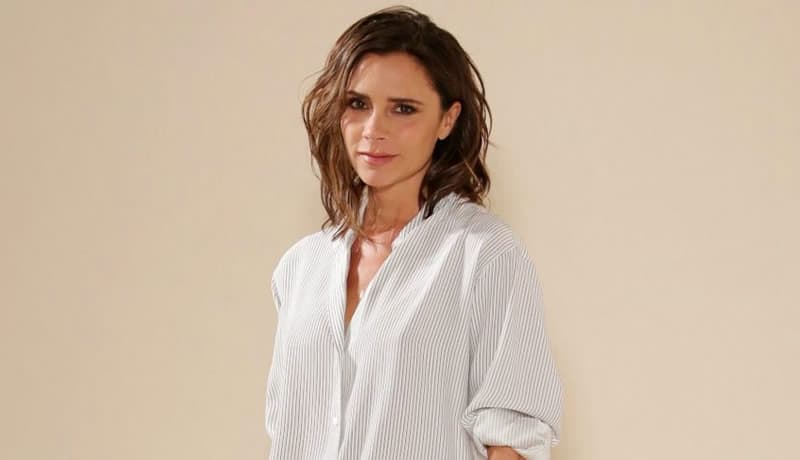 It’s no secret that Victoria Beckham had plastic surgery. She said it herself.

But I’m not sure if she has come clean with “every” procedure.

As the wife of David Beckham, she probably wanted a lot of work to keep up.

We will do some comparisons and see if we can find all of her enhancements.

Did Victoria Beckham have botox? 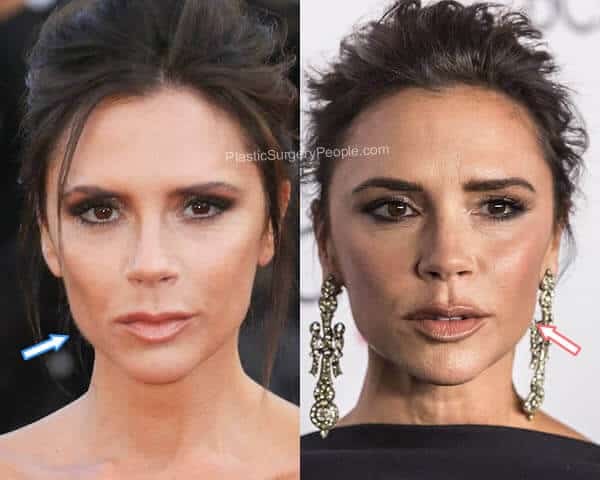 You may have noticed Victoria’s slightly swollen face on several occasions.

I think botox could be the reason.

It is also extremely rare for a woman, who is approaching 50, to be wrinkle-free and that seems to be the case here.

I’m sure she has an incredible skin care routine but fillers could be on that list.

Has Victoria had a nose job? 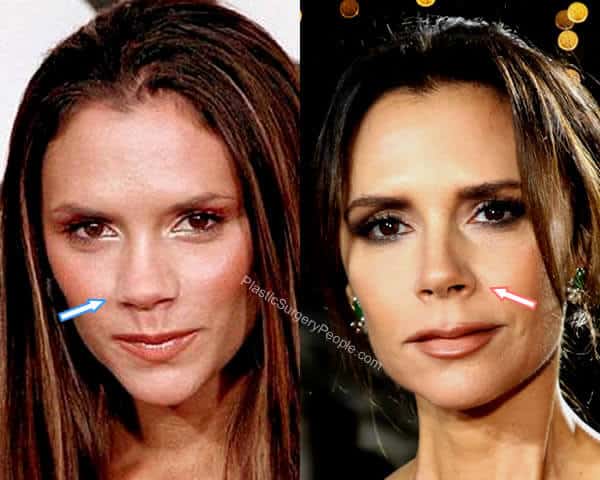 Victoria has a unique nose shape that seem to have gotten thinner.

Now, age could be a factor as she would have lost some baby fat along the way but I wouldn’t discount a nose job either.

The chance is slim given the shape has stayed mostly the same but it is possible. 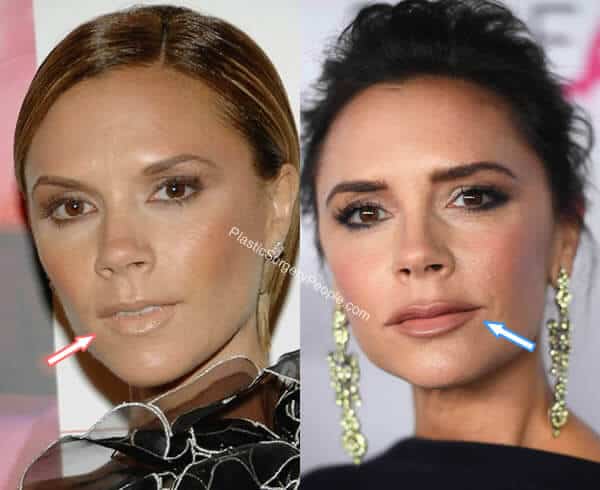 Her lips clearly looks thicker to me.

There is an inflated feel to it too which seems to indicate that there is more going on than just good lipstick and makeup application. 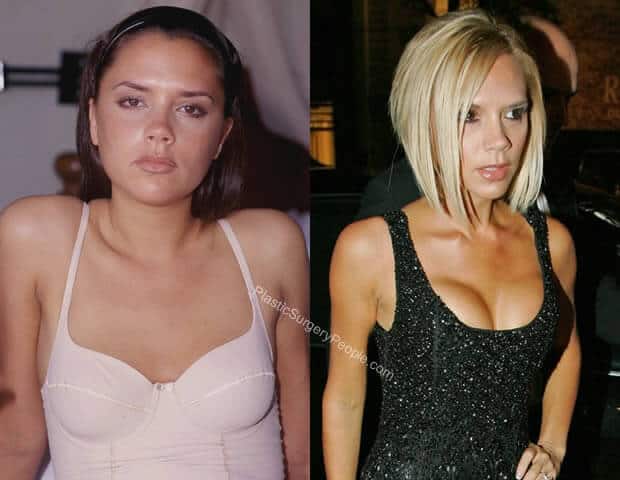 A few years ago, Victoria opened up about her breast implants and how she wished she never got them.

I guess it was hard to deny it as the size difference were quite noticeable especially when you compare it to her Posh Spice days.

Her boobs didn’t quite match her slim body so many people could tell they were fake.

She got a breast reduction 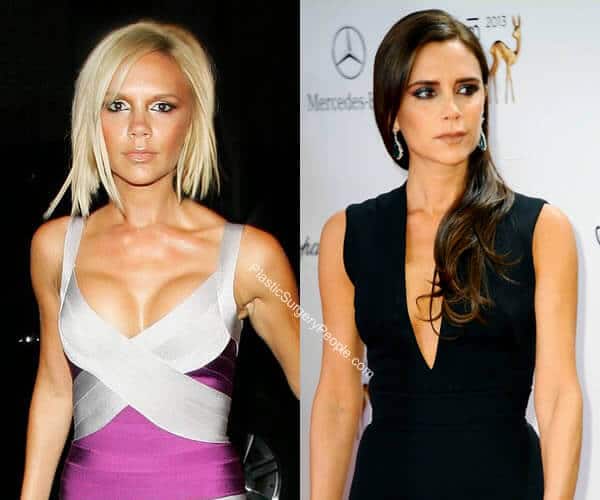 Years after getting her boob job, Victoria decided to have a breast reduction surgery following the birth of her fourth child.

She admitted that it was a mistake and she regretted getting it in the first place.

I think she made the right call and is looking more attractive in a natural way. 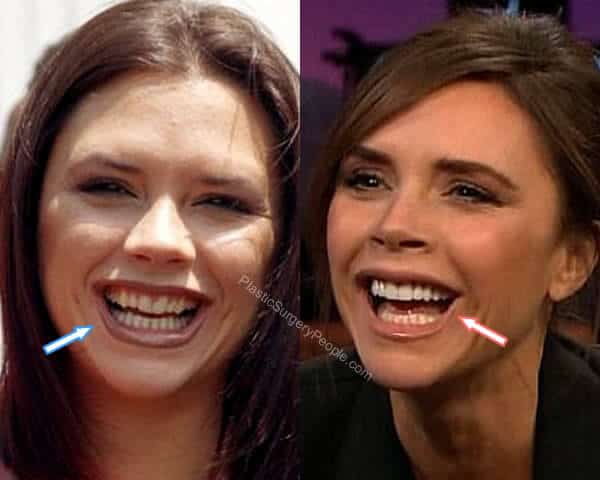 Have you ever wondered why Posh Spice hardly smiled?

That’s because Victoria used to have crooked teeth and they were a bit yellow too.

She has fixed them now with teeth whitening and most likely veneers.

Let’s dive deeper and see how much Victoria has changed.

I’m surprised to see that Victoria wasn’t quite a looker as a child.

She had some gaps on her teeth and went through an awkward phase, like most people.

Victoria as a teenager

As a teenage model and dancer, Victoria still had some baby fat on her face. I’m not a fan of that curly hair though.

Victoria didn’t look so “posh” when she auditioned to become part of the all-female band Spice Girls.

She obviously had the package but I’d give credit to her stylist too.

At the height of her career, Victoria married famous soccer player, David Beckham.

What a perfect couple!

I have no idea how she managed to look this good after giving birth to 3 children.

Liposuction? I doubt it.

An even slimmer Victoria was spotted at a famous restaurant in her fashionable little black dress.

As much as her looks have changed over the years, Victoria’s career also transitioned from a pop star to a fashion designer.

Victoria debuting her fashion collection in London. This was also the time I noticed some swelling on her face.

I can’t believe this woman is 48 years old.

She doesn’t look anywhere near this number.

What did Victoria Beckham say about plastic surgery?

Victoria wrote a letter to her 18-year-old self, which was published in British Vogue, and she said:

“I should probably say, don’t mess with your boobs. All those years I denied it – stupid. A sign of insecurity. Just celebrate what you’ve got.”

By sharing her experience, Victoria has taught many young girls to think twice about getting cosmetic surgery and personally, I think she has done a wonderful thing here.

After all, she is a role model for many.

While she may have done a little more than what she has shared in public but that’s not important anymore.