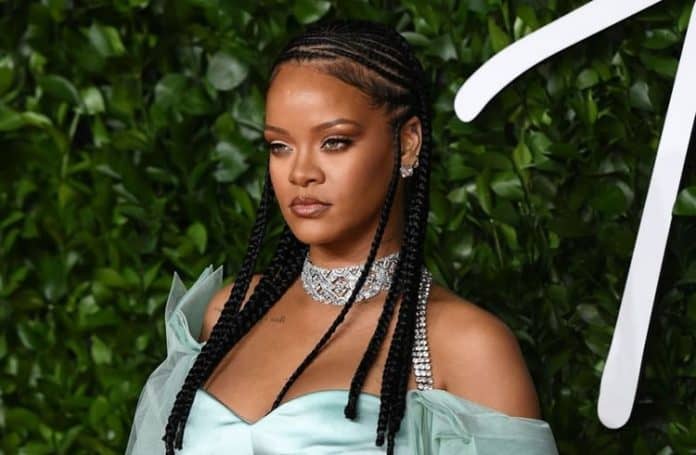 Rihanna is one of the hottest and most captivating singers in America.

Despite her amazing voice, she’s been the “Go-To” trend symbol for many females, thanks to her gorgeous face and sizzling hot body.

Like most successful celebs though, there are rumors about her having plastic surgery.

And we’re here to find out the truth.

We have gone through numerous photos before and after Rihanna became a superstar. Check it out.

Did Rihanna get a boob job? 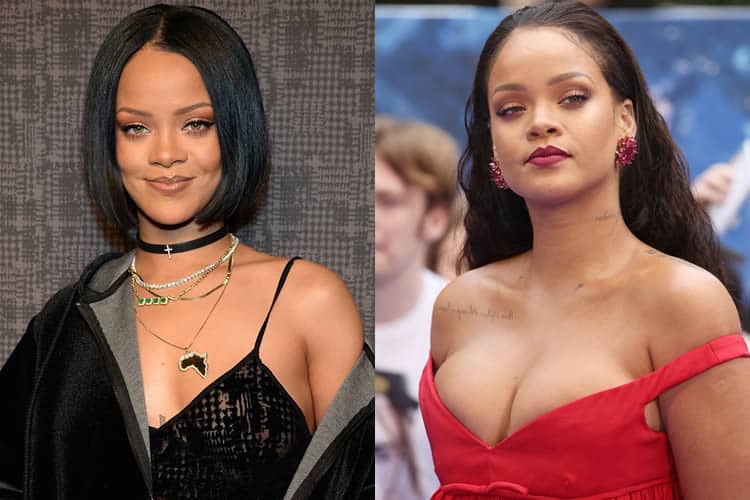 Many people are wondering if the Barbados-born beauty had breast implants.

This came after photos emerged showing an obvious size difference to her boobs.

Some suggested that Rihanna has simply gained weight and there were even speculations that she was pregnant.

However, if this enlargement didn’t come from fat or hormone changes, then there could be some merits to these claims.

Has Rihanna had a nose job? 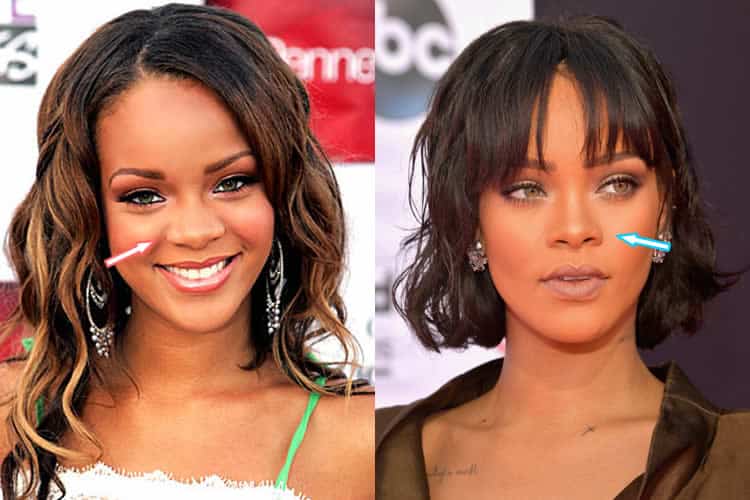 Even though Rihanna is not an African American, she did have a flatter and wider nose like most dark-skinned people.

If you look at her “Before” photo, her nose shape was bulky and her nasal bridge was actually quite flat.

Compare that to the “After” photo, her nose bridge looks more refined and narrowed. This extends to the tip as well as both sides of the wings.

Now, whether this is a nose job or makeup, we’ll let you make the call.

Did she have a forehead reduction surgery? 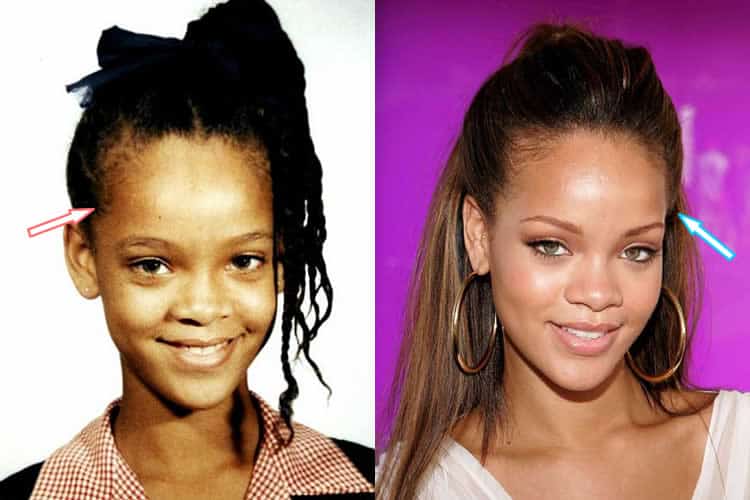 We all know that Rihanna has a big forehead.

It’s almost like she got implants in there. However, we found out that she had this distinctive feature at a young age.

Some people have also suggested that Rihanna underwent a forehead reduction procedure, but we haven’t found any evidence to support these claims.

So, there was NO forehead surgery as far as we’re concerned.

What about her hairline? 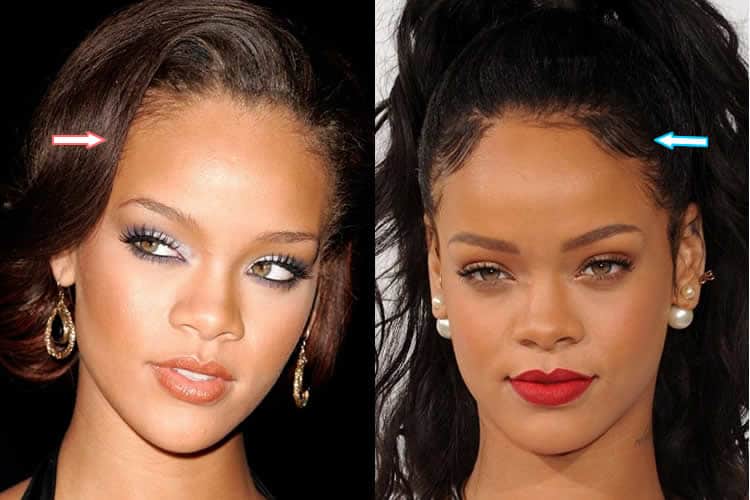 Rihanna’s hairline has been the center of attention for a number of years.

Sometimes, it appears as though she was losing hair as indicated by the thinning patches on the BEFORE picture.

Now, it looks like some hair has grown back around that receding hairline. This could be an indication that a hair transplant took place.

With the amount of money she makes, she can easily afford it.

Did Rihanna have an eye color change surgery? 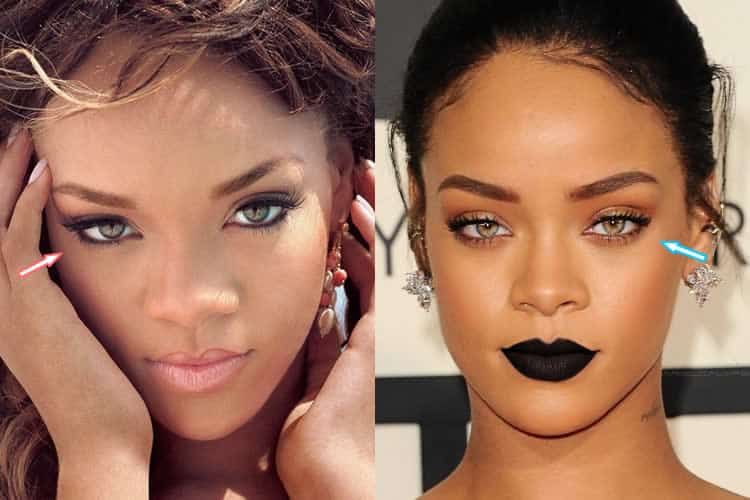 One of the most gorgeous facial features of Rihanna has to be her eyes.

It’s not often you see black people with light-colored eyes and Rihanna is one of them.

That’s why many people think she’s had an eye color change procedure. But the truth is, those are her real eye colors. She has natural green hazel eyes that almost seem light blue at times.

She may, however, wear color contact lenses at times to achieve a certain look (like dark brown). But that’s only if her job requires it.

Rihanna: Then and Now

Let’s see how the singer has changed throughout the years. Her transformation will surely be interesting.

Here’s a rare picture of Rihanna in her teenage years. She was just an innocent girl living in Barbados, a small country in the Caribbeans.

This was the year Rihanna made her debut album, Music of the Sun.

At just 17 years of age, she still has baby fat on her face. Her nose looks visibly wider too.

2007 was a breakthrough year for Rihanna in which her lead single, “Umbrella”, topped the music chart in 13 countries worldwide.

She was also named the ‘Celebrity Leg of Goddess’ by Venus Breeze.

Looking at Rihanna’s legs, you can see why she fully deserved that title.

The singer has one of the prettiest lip shapes for a female artist.

You can see the beautiful cupid’s bow that compliments her V-shaped chin.

I have not seen any signs of lip injections either so everything is natural here.

This was the year RiRi released her hit single “Diamonds” and topped the chart in over 20 countries.

Her famous boob tattoo (under, center or side) is nowhere to be found under this black deep V dress.

Here, the singer steps onto the red carpet for the 2015 Grammy Awards.

Her skin tone and skin color look so smooth and radiant. Given the singer was only 27 years old, botox and facelift wouldn’t even be in the equation.

Rihanna seems to be embracing her ‘plus size’ body while performing at the 2018 Grammy Awards in New York City.

While Rihanna’s body has not gone back to its skinny days, I think she looks amazing and healthy.

I doubt she had liposuction either and she most likely achieved this great body through diet and exercise alone.

After seeing all the comparisons put together, it’s hard to say that Rihanna is all natural.

Yes, there were clues that cosmetic surgery has taken place but it’s not a clean-cut either.

But whatever the case is, she did not overdo anything. That is very important. 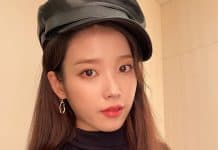 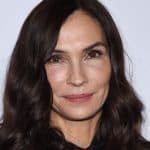 PSP Team - April 23, 2022 0
Something unnatural is happening to Famke Janssen and I'm sensing plastic surgery. She looks very different from her Bond girl days. Obviously, age is a... 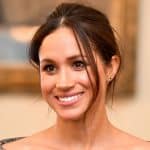 Park Seo Joon, Then and Now

PSP Team - July 9, 2018 0
When it comes to good looking South Korean actors, Park Seo Joon is right up there in the list. His charming charisma is one... 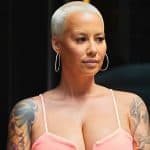 Amber Rose, Before and After Transformation

PSP Team - March 18, 2018 0
Amber Rose has finally admitted to having plastic surgery, but is it really what you think? The answer may just shock you... From modeling, singing, acting... 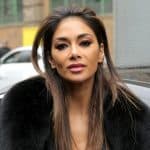 PSP Team - December 15, 2020 0
Hawaiian-born singer, dancer and TV star Nicole Scherzinger was part of a sexy burlesque group in the early 2000s. As the lead singer of...