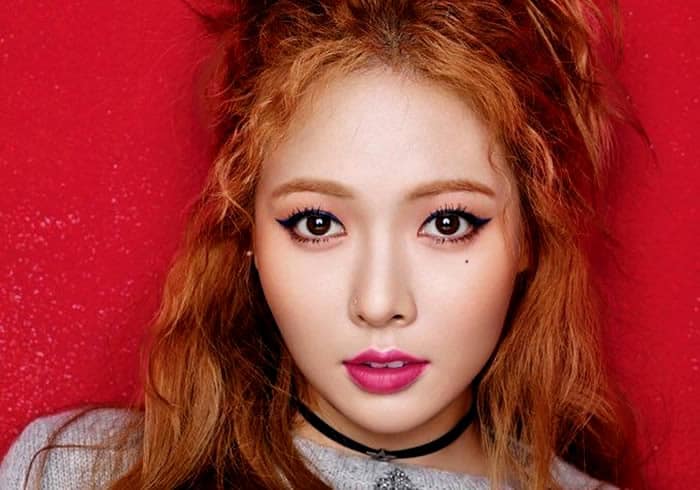 Debuting with the Wonder Girls and joining 4Minute was apparently just an entree. It was Hyuna’s solo career that ultimately sealed her fate as one of the most successful Kpop beauty today.

Like most gorgeous artists in Korea though, Kim Hyuna has been rumored to have visited plastic surgeons. Perhaps this is inevitable being a Korean idol?

I honestly cannot recall the number of times I have wondered whether Hyuna is a natural beauty. Yes, I have questioned her nose shape numerous times and if you don’t believe me, just check out the music video below when she did a duet rendition with Psy on the popular song “Gangnam Style”.

I’m fairly sure her nose bridge wasn’t that thin when she was younger and if you think it’s just all makeup, then I’m afraid I disagree with you.

I also have reasons to believe that her boobs might be fake too, but talk is cheap.

Allow me to dig deeper…for you.

What better ways to find out the truth than to analyze Hyuna’s pictures carefully and side by side.

Did Hyuna have a rhinoplasty? 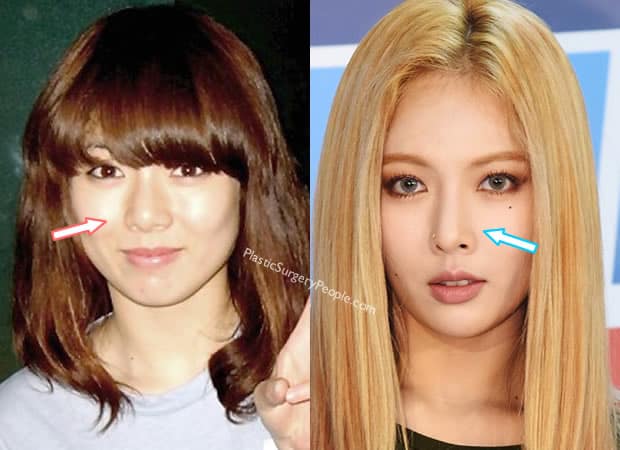 From the earlier photo, you can clearly see that Hyuna had a wider nose from her nasal bridge down to her nose tip. But now, her nose shape is nice, long and thin.

This suggests to me that she may have undergone a nose job. Sure, certain contouring and makeup techniques can make a person’s nose appear thinner, but I just don’t feel this is the case here.

Has she had a jawline reduction? 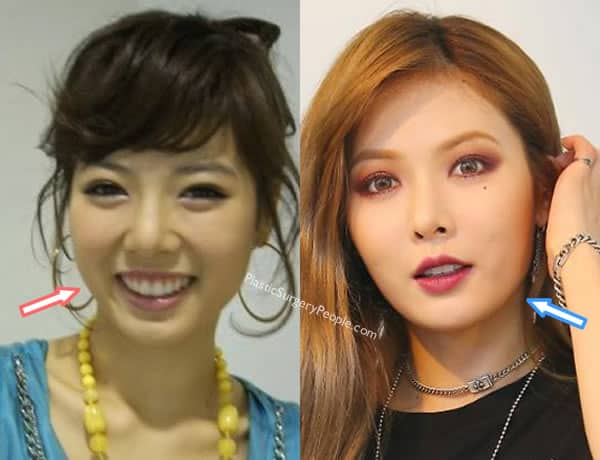 Although Hyuna has a nice pointy chin, she also has a rather wide jawline. While this isn’t exactly the typical face shape you see in terms of Korean beauty standards. I don’t believe she’s chiseled it down.

So, no procedures on her jaws from what I can see.

Did Hyuna get a boob job?

Yes, Hyuna’s body is definitely up there among some of the best female idols in the business. Her breast size, however, makes her stand out from the pack.

Judging from her before photo, it seems like she had a flatter chest in the earlier days. It’s difficult to say if the after pic is the result of breast implants or a push-up bra.

Does Hyuna have eyelid surgery? 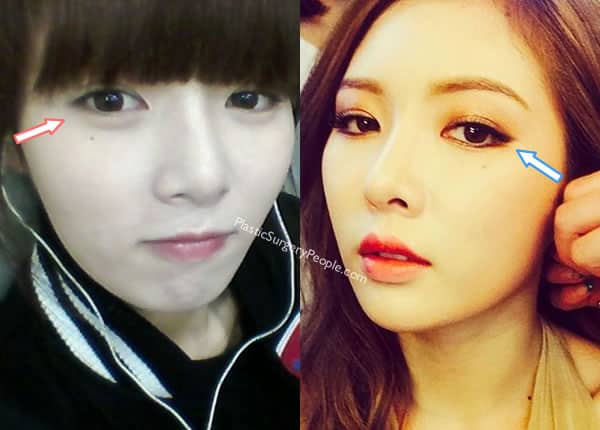 FACT: Most females in Korea want double eyelids. Whether it is through natural birth or plastic surgery is another story.

Based on the above evidence, I strongly believe Hyuna was born with double lids so no procedure there.

What happened to her lips? 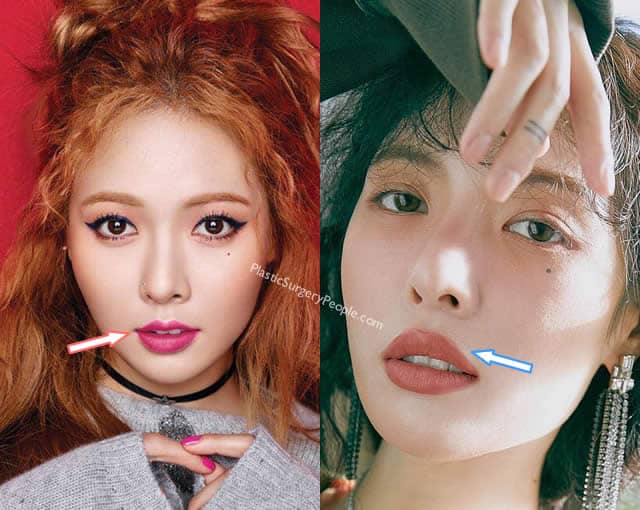 Lip injection isn’t very common in South Korea, but when you look at these before and after pictures, I don’t think anyone can deny that Hyuna’s lips look quite different.

Her upper lip looks a lot thicker so if you ask me, I’d say she most likely had lip fillers.

Here’s a rare picture of Hyuna when she was just a baby. She had beautiful eyes and already knows how to post for photographs.

At 15 years of age, Kim Hyun-ah made her professional debut as a member of the girl group, Wonder Girls. She had a short hairstyle back then with a perfect set of teeth. I guess she never needed any dental braces or veneers.

Since leaving Wonder Girls in 2009, the singer joined another female group 4Minute and also began her solo career on the side. Here she wears a hair wig and you can clearly see that her nose isn’t as narrow as it is today.

At 19 years old, Hyuna has transformed into a goddess and attracted a number of male fans. Despite having a cute voice, it’s her hot body shape that gave her performances another dimension. In fact, there were stories suggesting she was too sexy for her age. (WHAT??)

Some people even suggested she had a boob job and I must admit I kind of agree with them. Her breasts don’t look natural in this outfit but it could just be the bra. One thing I know for sure is, she did not have butt augmentation.

Since the disbandment of 4Minute, Hyuna resumed her career as a solo artist. She looks as beautiful as ever with her dyed hair, cute makeup, and that gorgeous nose. Not sure about you, but that seems like a good nose job to me.

I was quite shocked when I saw this picture because I couldn’t recognize Hyuna. I mean, she looks like another person. Her pale face and dyed eyebrows are nothing new, but her lips told a different story.

I’ll be honest here. Hyuna is naturally good looking with an amazing body and long legs. However, after analyzing many of her photos and videos, I found some evidence to suggest that her beauty might not be all natural.

There hasn’t been anything too dramatic in terms of her facial features, but her nose seems to have been altered sometime after 2009 when she became mainstream. In terms of her physique, Hyuna’s boobs have left me scratching my head. I’m not sure if they are real or fake, but if I had to guess, I think she had a boob job.

2019 has been an interesting year as it appears HyunA wanted to plump up her lips. Now, whether this was done by lipstick or lip fillers, you can look at the comparisons above and draw your own conclusion.