Skip to content
Home » Katy Perry: Before and After 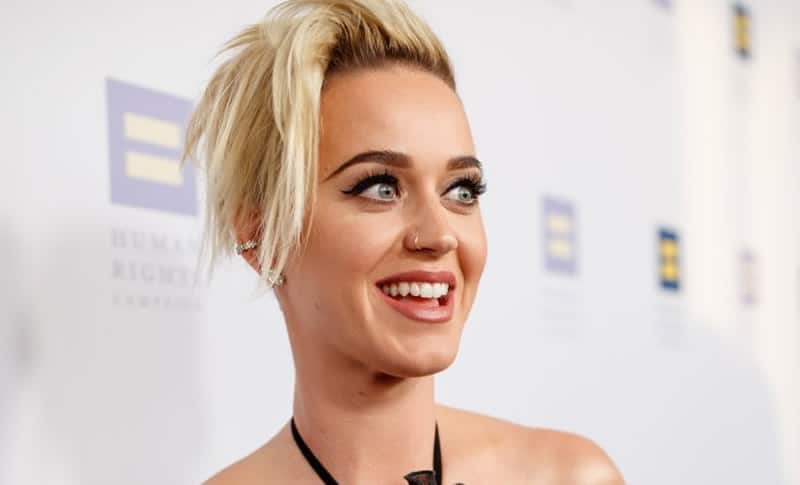 Pop star Katy Perry, Katheryn Elizabeth Hudson in real life, made a name for herself in the music industry with hits like “Roar,” “Firework” and “California Gurls.” The superstar, however, is also loved by her fans for her appearance and quirky fashion sense.

It hasn’t always been easy for her though…

The daughter of Pentecostal church pastors, Katy grew up singing Gospel music and attending religious schools. Katy’s sheltered childhood, however, didn’t stop her from pursuing her dreams of becoming a singer so she left high school to make music in Nashville.

Katy’s transition from a gospel singer to a pop sensation was met with a lot of controversies. Her songs were often picked apart and criticized. There were also rumors about the singer having plastic surgeries to achieve her Hollywood looks.

In fact, her body has always been a hot topic whenever she performs on stage. There were talks that she underwent a boob job and recently, some fans even suggested that the American Idol judge had botox injections.

So, how much of these speculations are true? Has the chart-busting singer actually had any cosmetically-enhanced procedures?

To figure out if Katy Perry had plastic surgery, I have gone through numerous photos looking for evidence. Let’s check them out.

Did Katy Perry have nose job? 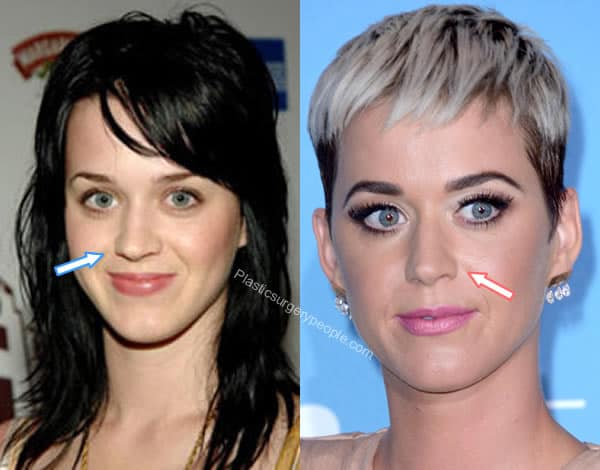 A nose job is a very common procedure in Hollywood and literally, every star has been suspected of getting this procedure at one point in their career, including Katy. But based on these before and after photos, it doesn’t look like Katy had a rhinoplasty.

Sure, she doesn’t have the perfect nose shape and you can also see a slight bump on her nose bridge. But overall, her nose isn’t bad looking and doesn’t require any “fix” if you ask me.

Did Katy get lip injections? 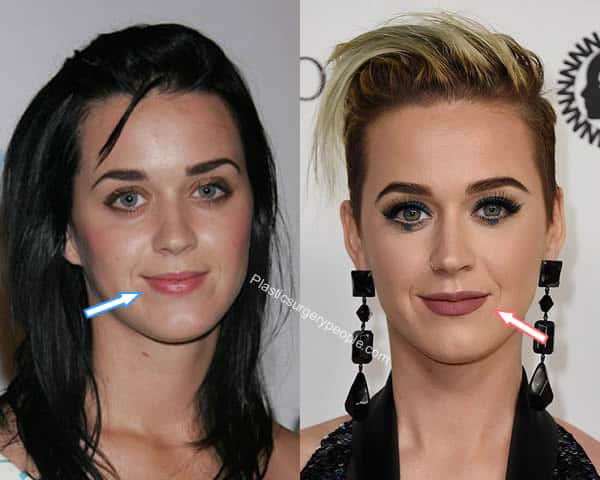 Katy has a fuller lower lip compared to her upper lip. Even with a glossy lipstick or a matte lipstick, Katy’s upper lip remains thin. So, based on this comparison, I don’t think she had lip injections. This is simply her natural look.

Has Katy had breast implants? 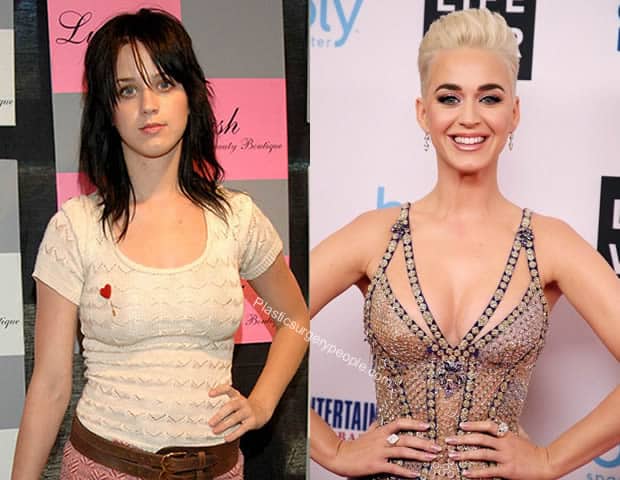 Most female stars, especially the ones as visible as Katy, have been suspected to have gotten breast implants or did something to change the size of their boobs. Katy, however, has full rounded breasts even then and this “before” photo is proof.

I don’t think Katy had her breast altered with cosmetic surgery because she has ample boobs from the very start. She doesn’t require a breast lift; she’s naturally blessed!

Did she get a butt lift? 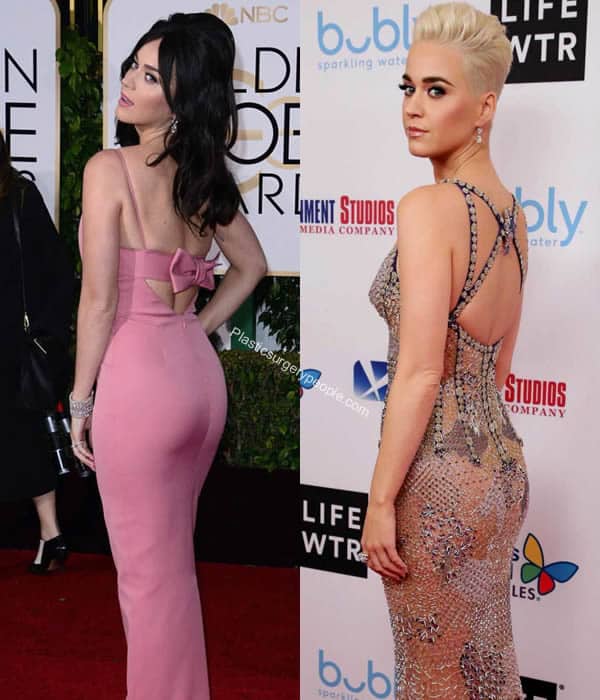 Katy apparently kept a cheeky secret, according to the rumor mill. People alleged that she had a butt lift consisting of steroids and other antibiotics with side effects that increase the size of her buttocks.

But this wild speculation also had an unhealthy side effect that causes the skin to thin out and sag eventually. Based on these before and after pictures, Katy’s buttocks aren’t falling apart or losing its fullness. To me, this says one thing only — her butt shape is all-natural.

So, how does she maintain that incredible body? Lots of gym and squats I dare say…

What about her crooked teeth? 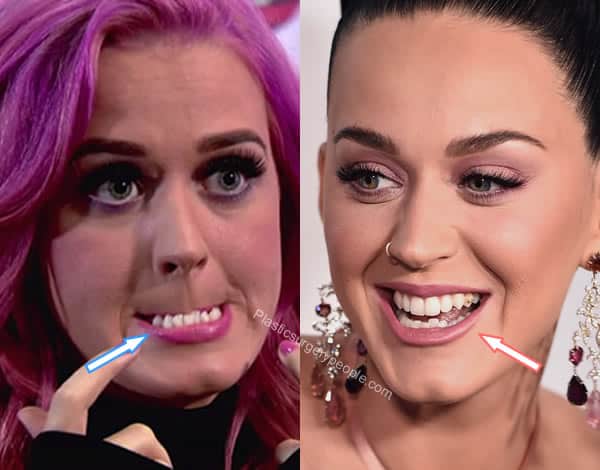 While she might have the body of a goddess, Katy does have some flaw and imperfections, such as her crooked set of lower teeth. She hasn’t done anything to improve her teeth’s appearance. No braces, no veneers, nothing!

Maybe Katy is afraid of dentist injections like a lot of people? I’m only guessing but if she is, then she’s likely also not keen on getting invasive plastic surgery with all those needles. What do you think?

Katy Perry: Then and Now

Now that we’re done with the comparisons, let’s check out Katy’s transformation over the years. Maybe we can pick up some “extra” things…or not.

Childhood: Born to be a star

Katy had early training as a performer when she sang at the church choir. She already looked like a spunky kid back then. By the way, I notice the wide bridge of her nose, which is clearly a prominent facial feature even now that she’s a grown-up.

Katy’s beautiful facial features make her look friendly and approachable. She seemed like a vibrant and positive teenager growing up. Got to love those double eyelids!

Katy launched her self-titled debut album featuring gospel music. She changed up her hair color to black now that she has become a professional singer. It matched her beautiful blue-gray eyes.

Also, if you look at her chin and jawline. They have stayed the same over the years.

The singer achieved some success with the release of another album because her song “Simple” was used in the soundtrack of the movie “The Sisterhood of the Traveling Pants.”

Though I don’t especially like Katy’s style in this photo, she’s slowly showing the world her unconventional and outlandish fashion sense with this tight-fitting white top, red printed hot pants, wide belt and yellow pumps. The floral handbag is a nice touch.

Katy finally hit it big with the release of the song “I Kissed a Girl.” Now a confirmed success, she became more emboldened to show her style in her music and her outfits.

This white number reminds me of what pin-up girls wear and I think that’s the look she was going for. Katy added her brand of quirky with the beaded butterfly hair ornament.

Katy turned heads when she attended the MTV Movie Awards with shiny blue hair. The wig made her look fabulous. She also wore a lighter shade of contact lenses for her eyes and her makeup artist highlighted this feature really well with the cat’s eye makeup.

She’s a true performer even if she just has to stand on the red carpet. She has to be a spectale and Katy successfully pulls this off each time.

Katy looked refreshingly pretty when she attended the Grammy party with her hair pulled up in a braided curl like a diva. She kept it quirky with her sexy sequined dress. Her makeup in this photo looks subtle but it highlighted her best feature — her eyes.

Now one of the most followed stars on social media, Katy went for a drastic hair change by cutting her long locks really short and coloring it platinum blonde. As with her other style experimentations, this look suited Katy as well.

I like that she keeps everything else subtle, such as her lipstick color and the jewelry she wore. As a result, I’m drawn to look at her eyes and her face, as well as notice her major hair change. And check out those eyebrows – WOW!

She grew her hair a year later and went for a medium blonde shade. I admit, she really looks different in this photo. Perhaps it’s the contrast of the redness of her lips against her pale skin color and hair.

I know I know…some people are speculating botox, but I really don’t think she needs it.

What does Katy Perry say about plastic surgery?

Katy denied that she had any plastic surgery done on her face and body but she has had cosmetic enhancements. She spoke about it in an interview with Refinery29:

“I’ve done lasers and got [filler] injections under my eyes for the hollowing — which I’d recommend for everyone who wants a solution for their dark circles — but all of my assets are real. People tend to think they are fake, but it doesn’t really matter.”

The preacher’s daughter has definitely carved her own niche in the Entertainment industry. She influences people in a different way than her parents, with her music, her looks and her outlook in life.

Katy Perry is naturally talented with natural assets. I believe her when she declared that she did not get plastic surgery. But obviously, she doesn’t take her appearance for granted. In fact, she makes an effort to stand out, especially in this competitive Hollywood landscape.