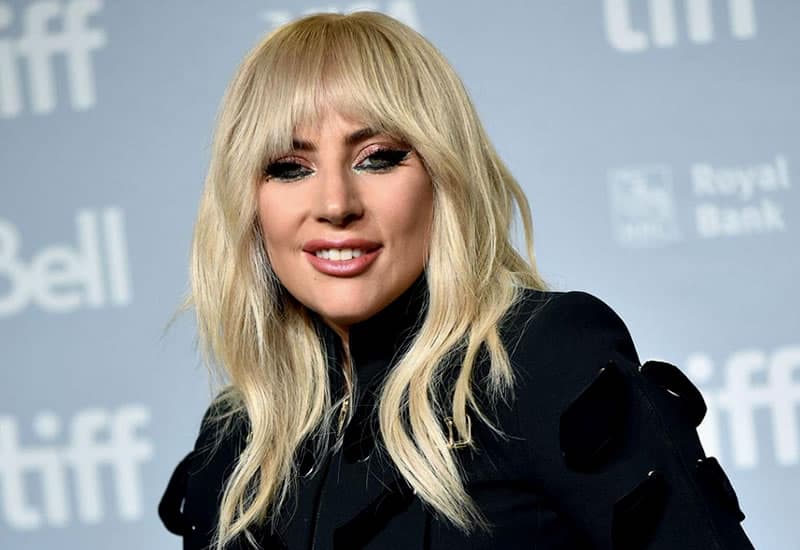 Lady Gaga, who is Stefani Germanotta in real life, once told radio host Howard Stern that she had an obsessive plastic surgery phase. The “Born This Way” singer apparently loved it so much that she regularly got face fillers.

This opened talk, however, contradicted Gaga’s declaration in an earlier Harper’s Bazaar interview where she claimed she has never had cosmetic surgeries and hinted never will.

Known for her controversial songs and life, as well as her outrageous outfits and looks, she definitely looks like someone who’s willing to experience “things” such as botox and lip fillers.

When Lady Gaga performs on stage, it’s actually a showmance. When she’s not performing, however, she still gives her fans a visual treat because she rarely looks normal when she’s making a public appearance. Her penchant for putting on unusual makeup and outrages costumes have led people to question what exactly goes on with her appearance.

Some fans think she’s had a nose job, while others are certain she’s had breast implants.

Some even wonder – is Lady Gaga a man?

A chameleon like Lady Gaga is an interesting study because there are so many layers to her. We’ve analyzed her different looks over the years and compared her past and present photos for hints of plastic surgery.

What did we find out? Let the unraveling begin!

Did Lady Gaga Have A Nose Job? 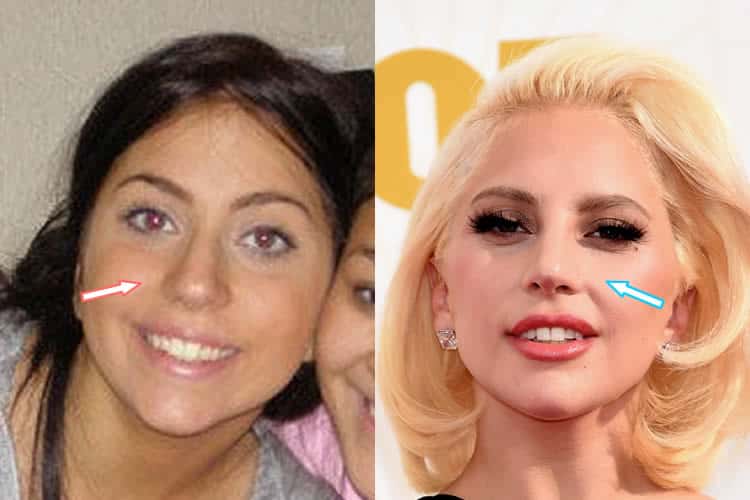 Lady Gaga’s nose tip is a dead give-away that she had rhinoplasty, according to a London plastic surgeon, Dr. Maurino Joffily, in an interview with Daily Star. He believes that the singer had her nasal bridge fixed because her nose shape appears straighter and narrower with a more defined tip in her after photo.

We agree with his analysis. Looking at Lady Gaga’s younger picture, her nose used to be larger with a bulkier and rounder tip. This indicates a nose job, which we must commend has been done wonderfully because it looks quite natural, and is not too small or upturned.

What About A Boob Job? 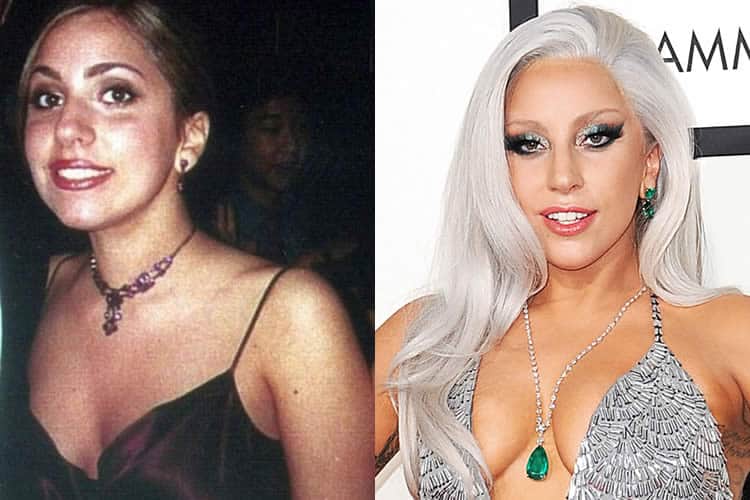 There were rumors that Lady Gaga had breast implants to slightly boost her boob size. The purveyor of the sexy underboob trend, according to the Hollywood Reporter, Gaga actually loves showing off her cleavage and parts of her breasts in her public appearances. So, it makes sense that she desired to improve her breast’s shape and form.

Lady Gaga’s boobs aren’t scandalously large, however, as plastic surgeons said that what matters in a boob job is that the breasts are smaller in diameter but with a perkier and higher lift. This way, the breasts project a better silhouette in photos — and Lady Gaga definitely takes advantage of this as her look is also part of her artistry.

Has Lady Gaga Had Botox & Facelift? 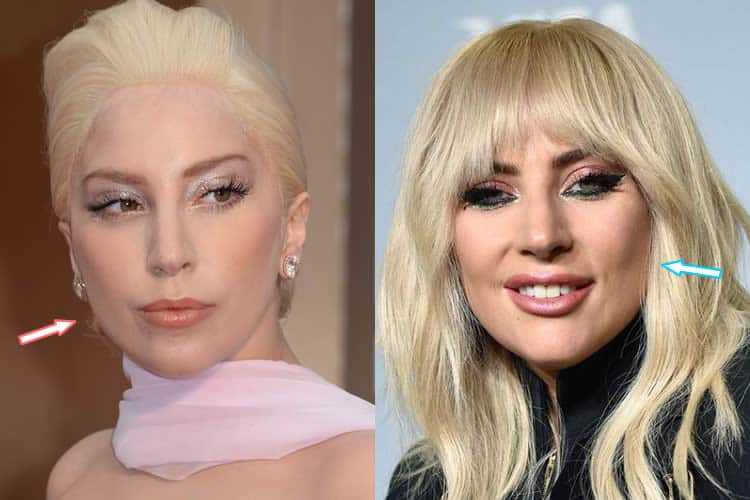 The “Poker Face” singer had botox injections, which defined her new face and lifted her brows, according to some Beverly Hills cosmetic surgeons. Gaga might have also gotten the facial fillers to perfect her cheeks and chin.

Unlike the more matured Renee Zellweger, we haven’t spotted any signs of a facelift and we doubt Gaga needs one at her current age. However, we think botox has helped contour Lady Gaga’s face to get rid of the imperfections which explain the puffiness in her later pic above.

Lady Gaga’s mouth shape changed over the years and it doesn’t look like it’s simply biology. If you look at the comparison pictures carefully, you can tell that the “Bad Romance” hitmaker had lip fillers to give her lips a noticeable pout.

Lip injections might have also contributed to Gaga’s more prominent and fuller lips as she got older. If this is real, then she definitely made a good choice with this beauty investment since people would always be drawn to her lips whenever they watch her sing. Let’s just hope she won’t overdo it…

Does Gaga Have Butt Implants? 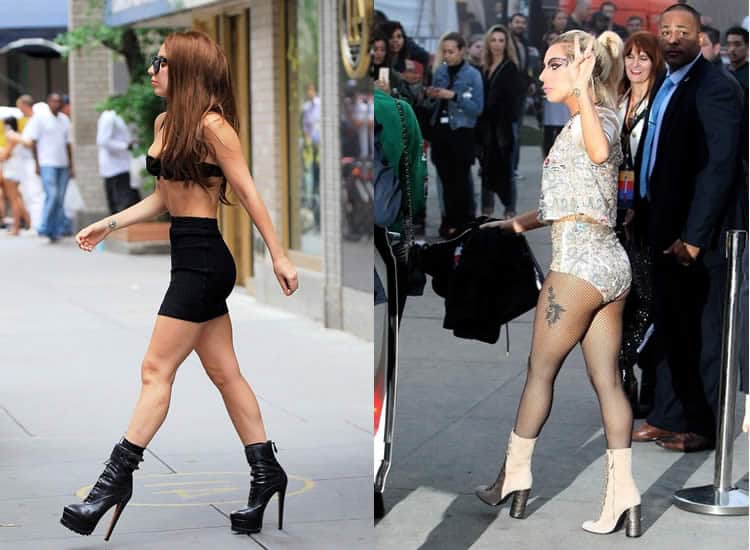 Lady Gaga wears the sexiest costumes that show off her butt in her performances and appearances. Though she shares her exercise routines on social media, which actually includes a grueling butt lift with a VersaClimber, people still wonder how she got her butt to maintain its fullness and roundness. Is it also a result of butt implants?

As she struts in high-heeled boots in these pictures, it’s hard not to notice the difference in the bum shape. Lady Gaga’s butt definitely looks more defined in the after photo. Perhaps she just gained a little weight?

Let’s take a look at Lady Gaga’s stunning transformation before and after she became famous. There could be a few plastic surgeries that we may have missed. 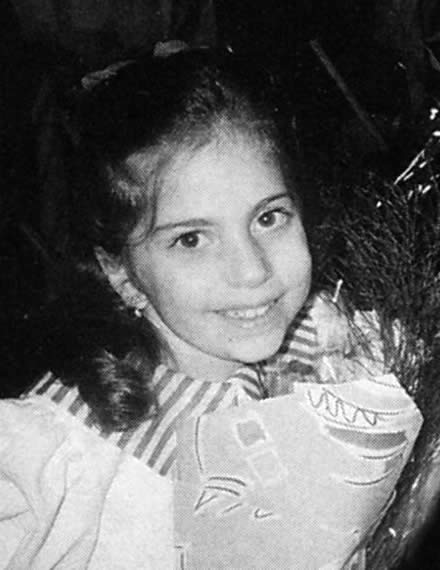 Little Stephanie was an adorable kid when she was young. If you haven’t seen Lady Gaga in her most natural look, here she is with her cute face — untouched with any makeup or cosmetic enhancements, of course. 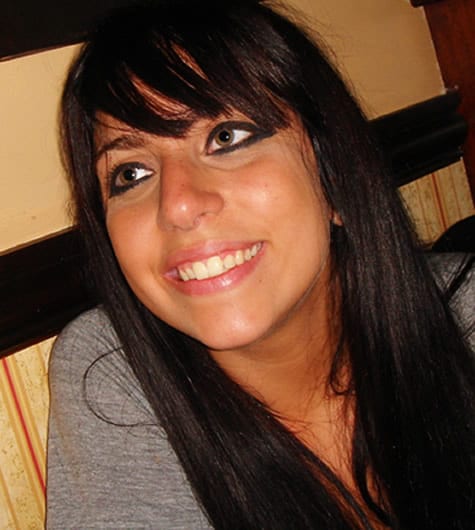 As a teenager in high school, Lady Gaga has already experimented with makeup. People who wonder if she ever changed her nose can stop the speculations because here’s the evidence that she used to have a big nose. See the difference between then and now? 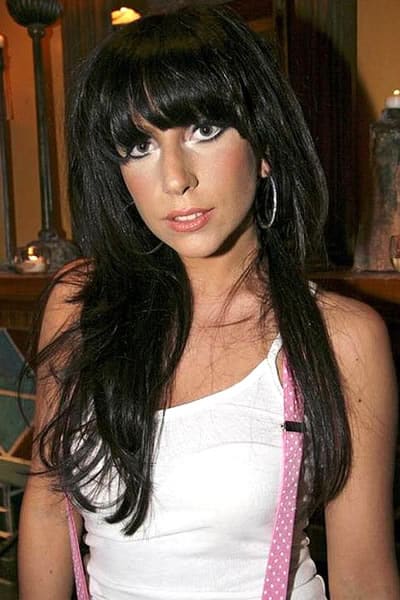 Lady Gaga released a song with hip-hop’s Grandmaster Melle Mel and was part of a college band at the NYU. Even then, she already demonstrated a flair for looking different as she changed her natural hair color to black hair and wore an attractive eye makeup.

This photo, however, shows her most natural face before fame hit. 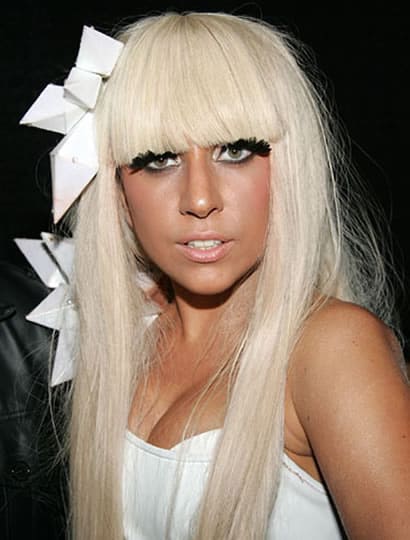 Thus began her dramatic look. This was the year Lady Gaga released “Poker Face” and her popularity exploded. In keeping with the showmance, she always wore absolutely over-the-top makeup and hair wig. For years, Lady Gaga had blonde hair when she’s actually a brunette. 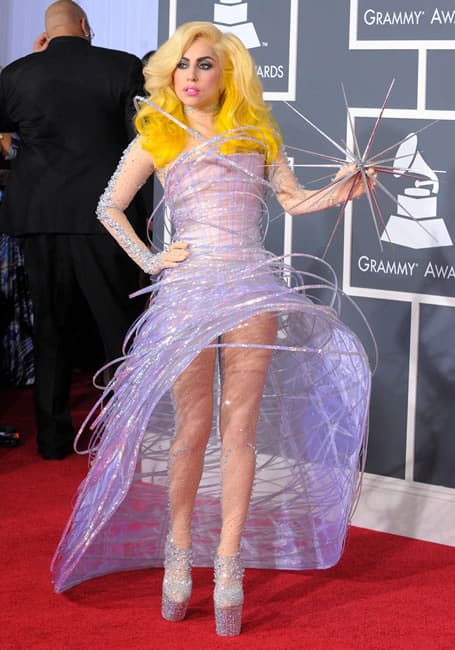 Lady Gaga arrives at the Grammy Awards wearing a dazzling costume — not just a dress or gown — which showed off her toned body shape, legs, and interestingly unusual high heels. This signaled her call to the world to take a good look at her for she will make her mark as an artist in both music and fashion. 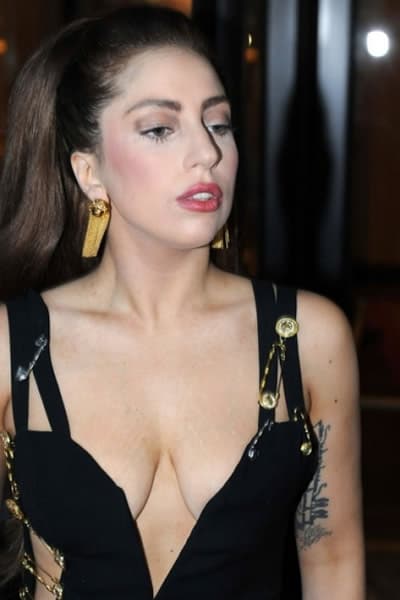 The “Paparazzi” singer shocked the actual paparazzi with this revealing Versace outfit, which displayed her natural boobs and tattoo. We can vouch that these are her real boobs since the breast size appears smaller than the fuller chest we see from her today. 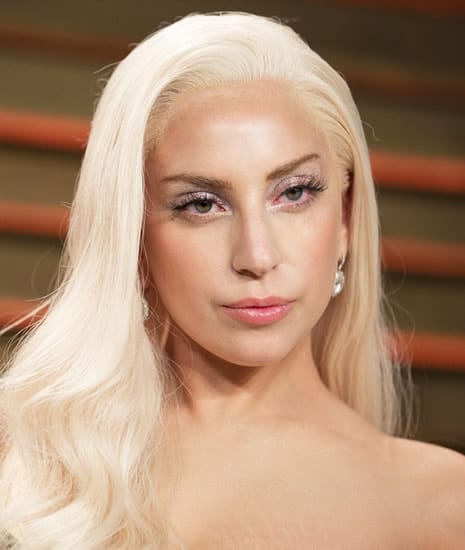 At the Oscar Awards, Lady Gaga surprisingly showed up with minimalist makeup and an unassuming hairstyle. She looked like a classic glamorous Hollywood star. Fans noticed her nose, however, and how it looked slightly thinner. Was it makeup or a nose job? And what about her sultry eyes — was this just makeup or eyelid surgery? 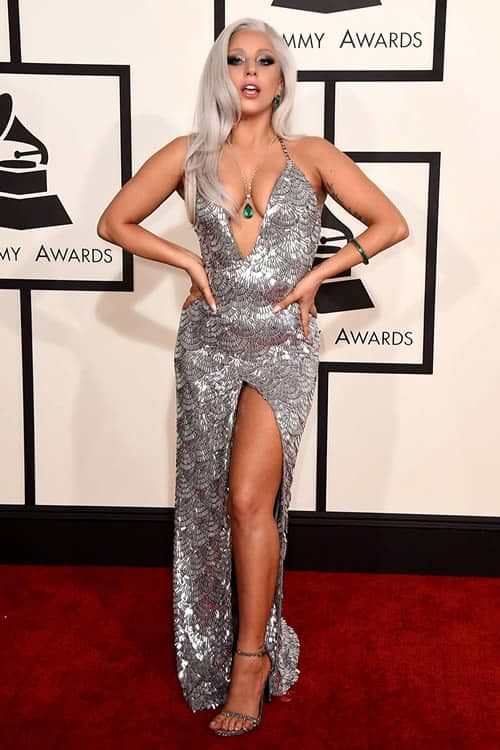 Lady Gaga sparked yet another boob job speculation with this sparkly dress for the Grammy Awards. Her fuller breasts suggested fake boobs, but fans also turned their attention to her flat abs and slim waistline, although we doubt her body had anything to do with liposuction or a tummy tuck.

We, however, love the style of her silver dress with the front slit that revealed her hot legs and feet. We also love her darker skin tone. Did she have a real sun tan or did she get a fake spray on from a clinic? 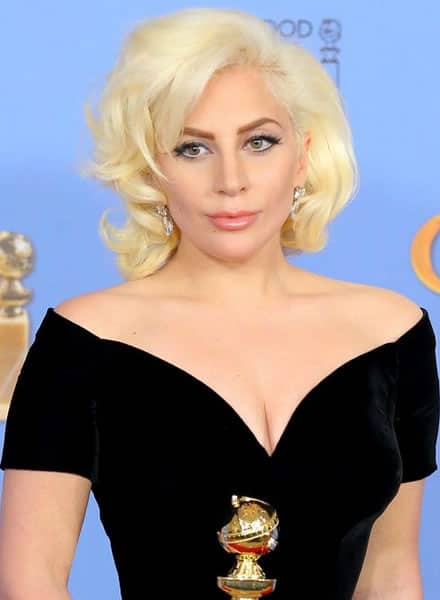 Credit: Getty Images
A more sophisticated Lady Gaga graced the Golden Globe Awards to rub elbows with the Hollywood greats. It’s as if she no longer likes experimenting with bolder looks this time, with her barely-there makeup and almost nude lipstick. She actually looked like Marilyn Monroe!

Lady Gaga’s lean protein, high fiber diet works well for her as her face looks slimmer and toned. She appears to be keeping a good skin care routine as well because she looks flawless and glowing in this photo. 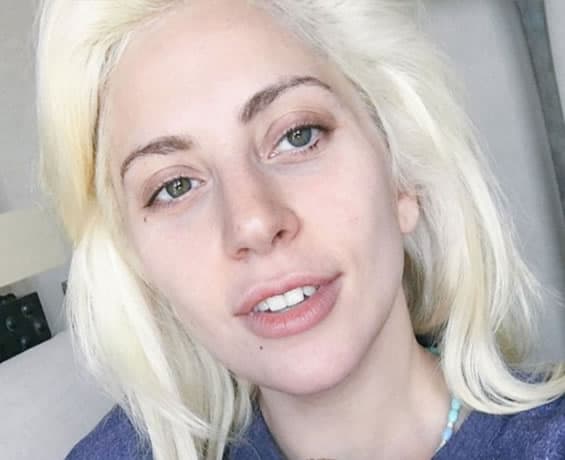 For her 30th birthday, Lady Gaga shared a photo of herself with no makeup and unkept eyebrows. Do you recognize this fresh and younger version of her?

But people also noticed her chin looks thinner and more defined. They speculated she got rid of the chin implants but it might just be the angle of the photo to create the perfect illusion.

Meanwhile, her teeth also appear to have undergone teeth whitening. It’s unclear if Lady Gaga had braces and dental veneers procedure since she doesn’t smile in photos as much. 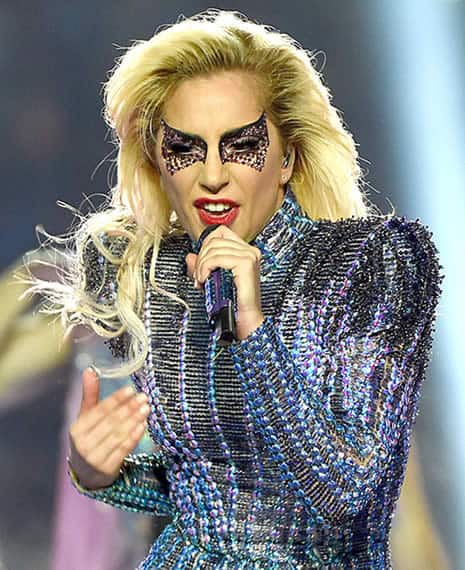 She’s back in her crazy style, folks! After a going with an understated look for a couple of years, Lady Gaga pumped the crowd at Super Bowl 51 with Swarovski crystals on her eyes and costume. The event explains the outfit, though, because every Super Bowl performer has to deliver a spectacle at Half Time — and she did! 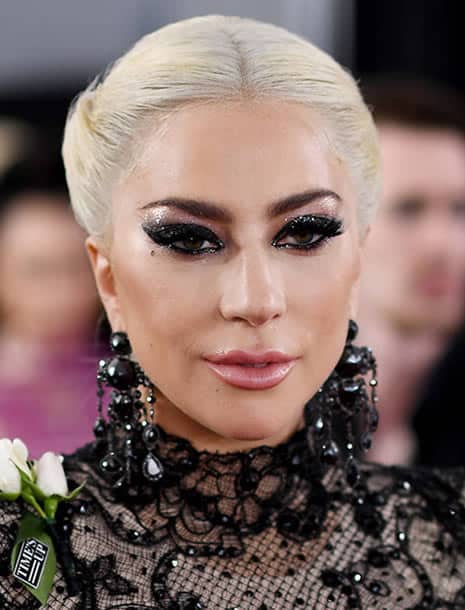 Here Lady Gaga arrives at the 60th annual Grammy Awards at Madison Square Garden in New York. She still keeps the dramatic flair but has toned down her outrageous style a notch while adding a touch of elegance.

It looks like she might’ve had another round of lip injections in this photo. There appear to be possible cheek implants, but it could also be the botox doing the puffy tricks. Her perfectly contoured chin drew a slight face change as she goes for sophisticated and classy with this look.

What Did Lady Gaga Say About Plastic Surgery?

During an interview with Harper’s Bazaar back in 2011, she gave her view about having cosmetic enhancements. Here’s what she said:

I have never had plastic surgery, and there are many pop singers who have. I think that promoting insecurity in the form of plastic surgery is infinitely more harmful than an artistic expression related to body modification.

She then went on while giving us a glimpse of the entertainment business.

And how many models and actresses do you see on magazine covers who have brand-new faces and have had plastic surgery, while I myself have never had any plastic surgery? I am an artist, and I have the ability and the free will to choose the way the world will envision me.

This interview was conducted 2 years prior to her confession with Radio Host, Howard Stern.

She has never commented on her face and body speculations after that.

You don’t need a million reasons to love her! Lady Gaga’s countless makeover over the years has surely made her one of the most interesting celebrities of her generation. The controversies in her life seemed to complement the drama that goes with each of her looks.

Though she flip-flops when it comes to statements about cosmetic surgeries, we conclude that it’s very likely she has undergone treatments like botox on her face and a nose job, as many plastic surgeons have determined.

As for the rest of her body modification, Lady Gaga has always been open about her diet and exercise on social media, so those could be factors to her toned body and legs.

Although there wasn’t conclusive evidence, her saggy boobs appear to have been lifted and the same can be said about her rounded butt. But as a woman who loves to dress up and change looks, fans will understand if she does admit to getting beauty enhancements to stamp her identity in the industry.