Skip to content
Home » Did Jennifer Grey EVER Touched Her Nose, Face & Body? 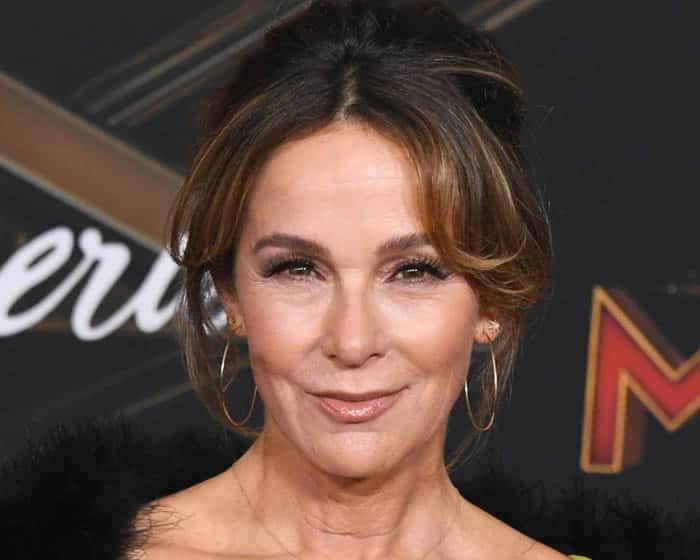 Actress Jennifer Grey shot to fame when she appeared in the movie “Dirty Dancing” with Patrick Swayze. Who can forget Baby Houseman — with her wild fussy hair, cute nose and almond-shaped eyes — who fell in love with a dance instructor in the cult film?

The Manhattan-born actress worked as a commercial model in her teens before landing movie jobs. Jennifer was in her early 20s when she also played Ferris Bueller’s jealous sister in the ’80s hit movie starring Matthew Broderick.

For a while, it seemed everything was a bed of roses for this Hollywood babe. So, it was not surprising to learn that someone as gorgeous as Jennifer was also dating good-looking men like William Baldwin, Johnny Depp, Michael J. Fox, and her “Ferris Bueller” co-star.

However, by the time the 1990s rolled, the actress’ career stalled and she kept a low profile. She re-emerged in the next decade looking quite different and shocking the people that have had her image as Baby from “Dirty Dancing” in their head. The press could not help but talk about the drastic result of Jennifer’s cosmetic augmentation.

Having seen her early movies, I’d definitely agree that the changes to her face made it seem like I’ve been watching two different actresses. So, what happened to Jennifer Grey?

What has Jennifer Grey undergone to change her looks and why did she get cosmetic surgery in the first place? Let’s examine her transformation in these before and after photos.

Did Jennifer Grey have a nose job? 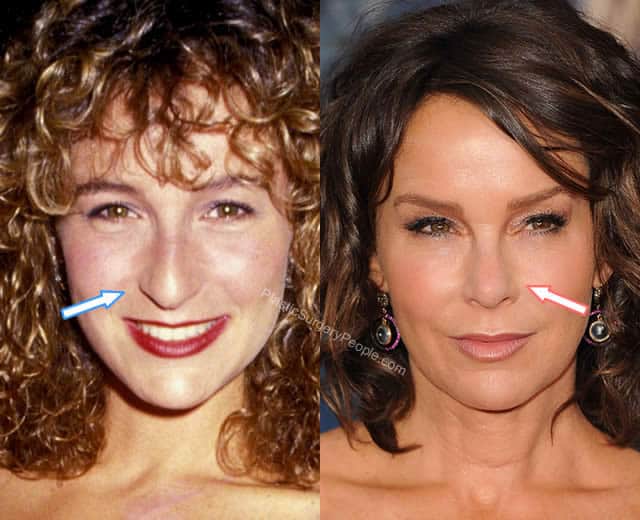 I actually liked Jennifer Grey’s old nose for its imperfections. Her new nose was obviously scaled down at the tips and the ridge above her bridge was also sculpted rather oddly.

The actress was upfront about having her nose done. She admitted to having had two rhinoplasty procedures that apparently did made her unrecognizable even to her friends.

Has Jennifer had a facelift? 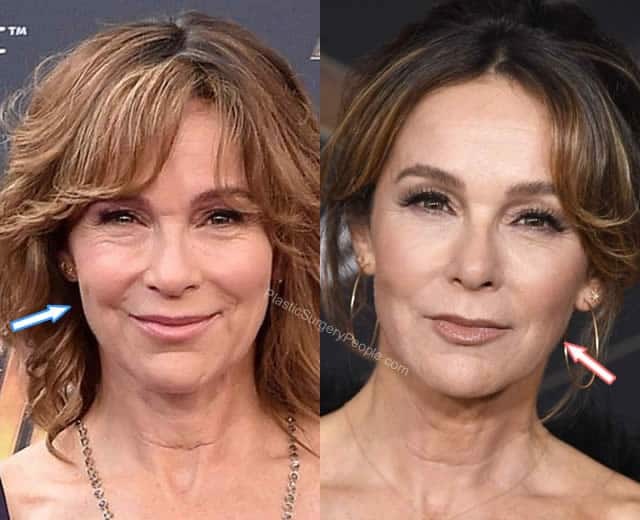 I’d say this is also an affirmative given the obvious difference to her appearance. She looks so much younger in the “after” photo than the “before” photo. The deep folds and lines on her cheek in the left photo have also disappeared in the right image.

Does she have botox injections? 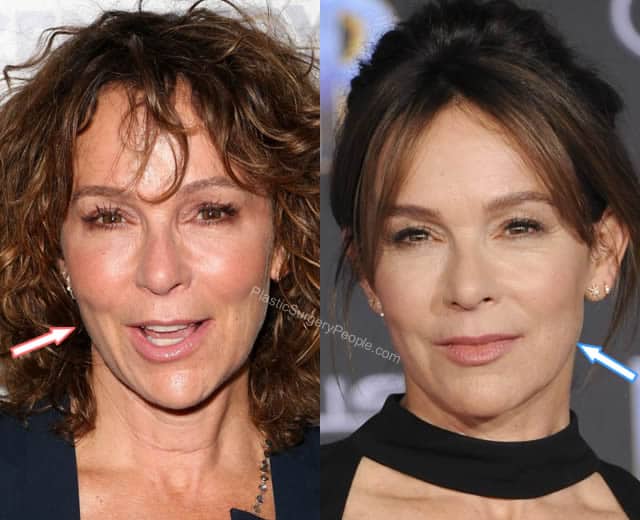 The actress denies getting botox injections. However, the stiff and rigid features of her face in this “after” photo says otherwise. I think that she did have botox to look better on TV when she competed on “Dancing With The Stars.”

What about the Dirty Dancing star’s body? 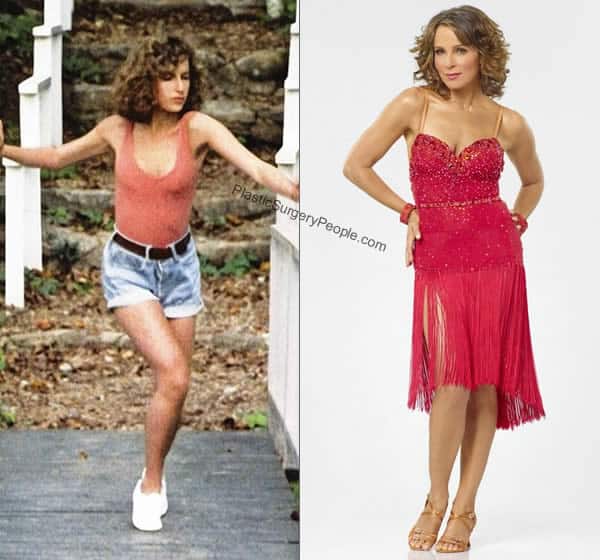 Because Jennifer has maintained her slim physique, I’d wager she didn’t have any plastic surgery to her body. There are no signs of a boob job or liposuction as far as I can tell.

Her breasts appear to be the same size, while she has amazingly kept her waist slim despite giving birth in 2003 to a daughter with husband Clark Gregg.

Jennifer Grey: Then and Now

Let’s go through Jennifer’s past and present pictures to see her transformation over the years. We might discover her anti-aging secrets somewhere.

Jennifer Grey was born to dance! This picture of her as a toddler wearing a tutu dress and a ballerina crown is totes adorable! She had a rounder face as a child, which I think just adds to her cuteness.

You know what I love about her beauty? Jennifer doesn’t have beautiful striking features and her nose, while prominent, isn’t perfect. But she has this refreshing appeal that makes her stand out. It may have helped that she wears those curls with confidence.

This was her breakthrough year as the muse of “Dirty Dancing.” Not much has changed with her looks. She still has that same girl-next-door appeal about her, albeit more older. Jennifer is also lucky to be born with near-perfect eyebrow arc and pretty lips with a full pout. I’d say those are natural!

Jennifer Grey guest-starred on the popular series “Friends” and looked nothing like how she used to. She later confirmed getting two nose jobs, with the second procedure intended to correct the mistakes of the first procedure.

I honestly think her nose job wasn’t necessarily bad and I don’t think it ruined her beautiful face, as the photo above will prove. What made it bad was because she became unrecognizable.

After years of agonizing over the nose job that apparently killed her rising career, Jennifer embraced the “new her” and actually starred in a TV series that made fun of her nose job in “It’s Like, You Know.”

She also straightened her hair, which I think was a good decision so that people would stop associating her looks from her “Dirty Dancing” phase. This tells people not to call her Baby anymore.

I also like the choice of lipstick color in wine in this photo; it complemented her skin’s color.

Jennifer did more drastic changes to her appearance by going with a darker hair color. Again, for me, this doesn’t look bad at all. I think the hairstyle suits her fine and with that shapely body to boot — she’s still a babe in my book, considering she was already pushing 50 at this point!

She took on the role of a college boy’s mother in Amazon’s “Red Oaks” but she’s one gorgeous and glamourous-looking mom in this photo! There are hints of aging, especially around her neck and the corner of her eyes, but overall, she’s one fine woman to look at and I’d bet you’d agree. I also like that she has false eyelashes on because it helped soften her look.

Jennifer Grey is almost 60 years old but I think she’s aging well. Thankfully, she hasn’t done any more drastic procedures apart from the nose job but I do see that she may have cheek fillers in this photo because it looks plumped.

What did Jennifer say about plastic surgery?

In an interview with Washington Post in 1999, Jennifer said about the rhinoplasty that altered her face:

“I decided to make fun of this, to make my fiasco become my reality. After all, it’s not cancer, and it’s absurd that just a nose job could wreak such havoc,”

Speaking about Botox, this is what Jennifer had to say to Us Weekly:

“Before the show, I thought, Oh, I should get some Botox, get rid of the wrinkles under my eyes. [My husband told me] not to touch anything, to be who I am, because I look great.”

People may always talk about Jennifer Grey under the context of the nose job that changed her looks. However, you’ve got to love her attitude for turning something negative into a positive thing.

When Jennifer learned to embrace the change, she shined even better and turned her career around. She may not have the same status in Hollywood as before but she’s still around and active in the business after three decades — that’s still an achievement.

I also think that she became even more beautiful despite the botched procedure. And for someone who’s old enough to become a grandmother, she’s still quite a looker!