Skip to content
Home » Denise Richards: Before and After 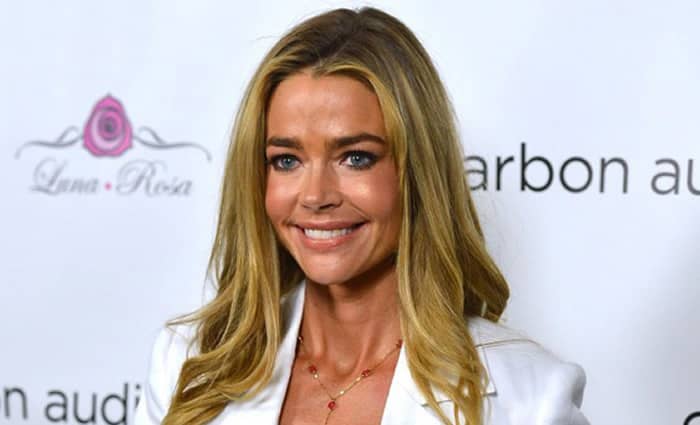 Actress and model Denise Richards has been in the public eye since she was in her teens. After doing dozens of commercials and photo shoots, she started appearing in low-budget movies to launch her career in Hollywood.

Even then, this California beauty was already a looker. Born to parents with German, French and Welsh ethnicity, Denise Richards has this appeal about her that makes men do a double take.

She finally got her big-screen break as a femme fatale in the coming-of-age movie “Wild Things” in the ’90s. Then, she landed one of the most coveted roles for women as a Bond Girl in the worldwide hit “The World is Not Enough.”

So, it’s no surprise that people question Denise’s appearance. Fans wonder if she has ever done plastic surgery to give herself an edge over other aspiring actresses.

Denise, however, has denied all the rumors surrounding her alleged procedures on record, except for one.

As part of the “Real Housewives of Beverly Hills” crew, I’m sure that her alleged plastic surgeries will be brought up at some point. But in case you don’t want to wait, like me, then here’s what I found out.

Did Denise Richards have nose job? 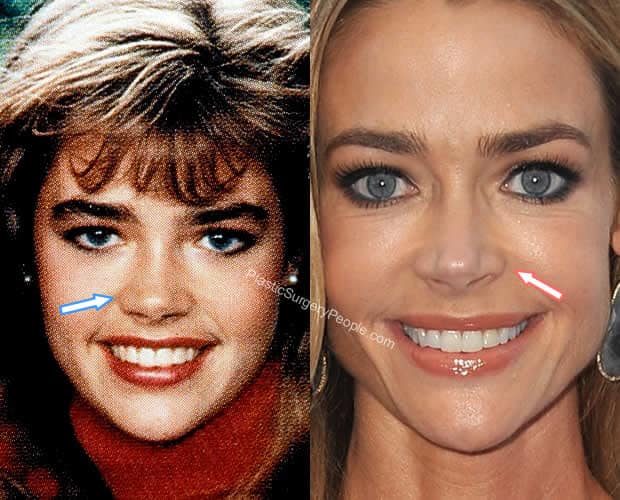 It’s pretty clear to me from these “before” and “after” shots that Denise didn’t get her nose fixed. She has the same uneven nose tip and wideness in both pictures.

Sure, her nasal bridge appears slightly thinner now, but so has her face. I just don’t see the striking difference to suggest any form of rhinoplasty.

Has Denise had breast implants? 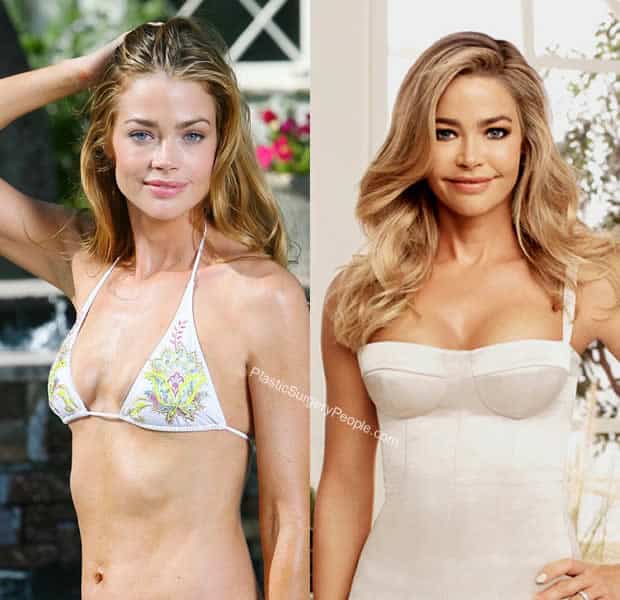 Denise had flat boobs when she was starting out as seen in this photo on the left. Her “after” pic, however, shows a woman with fuller, bigger and rounder breasts, which can only be achieved by having breast implants.

The actress did affirm that she got this procedure. She has been upfront about her boob job while she’s been mum about all the other speculated cosmetic procedures.

Did Denise get botox injections? 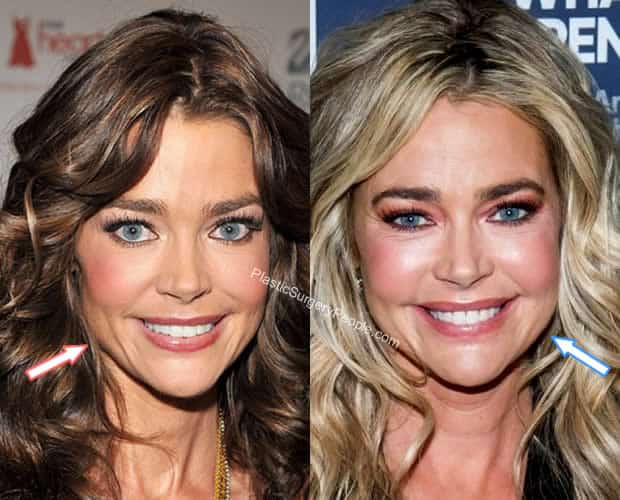 The former Bond Girl has denied she gets facial fillers. She has asserted that she has such distracting face expressions, which shouldn’t be possible if she were having botox.

However, these “before” and “after” pics contradicts her denial. Her cheeks and forehead look too smooth and wrinkle-free. In fact, her cheeks look puffy and appear to have been stretched as if her facial muscles froze, which is what botox usually does. 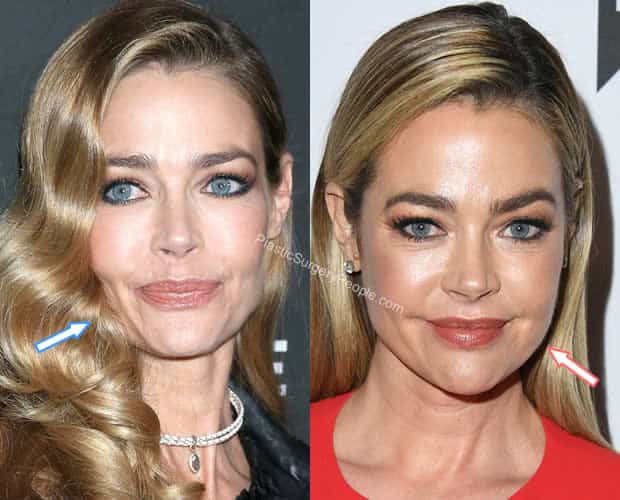 Though she denies getting a facelift, there’s an obvious difference to Denise’s tightened skin in these sets. She actually looks a lot younger in the “after picture” and there are fewer lines on her chin and mouth area compared to the “before” shot. So, I think she likely had a facelift procedure.

Does she have lip fillers? 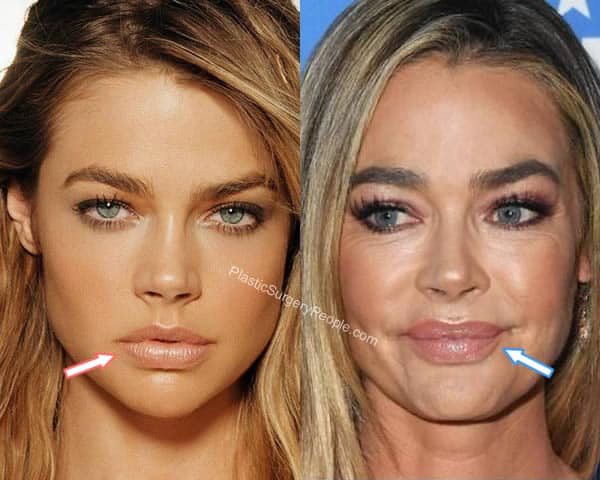 Denise has always had thick lips, but her upper lip appears to be fuller than usual in these comparisons. If you look closely, there are hints that she may have gotten lip injections to plump up her top lip.

If it’s true, then I hope it’s just a once off as I like the shape of her natural lips better.

Denise Richards Then and Now

Let’s see how Denise’s beauty has transformed over the years. We might even pick up other ‘evidence’ from these pics.

Denise had buck teeth as a baby, who knew?! Her nose looks flat and wide but then, she’s still a growing child. She does have a thick head of hair for a toddler though.

As a teenager, Denise bloomed into a beautiful young lady. Her gorgeous tresses should be the envy of a lot of girls her age. I’m sure she turned heads with her wavy brunette hair.

Denise also had a beautiful smile at an age when most teenagers were still having braces. She didn’t seem to have dental issues as she has a perfect set of teeth.

Denise appeared as a guest in the TV series “Lois & Clark” and I could already tell she has the making of a femme fatal with those alluring eyes. The red lipstick suited her, too!

She also had fuller breasts in this photo, suggesting that she may have gotten her breast done after she turned 18.

The actress got her breakthrough role in the sexy movie “Wild Things.” She was packaged as a seductive star. If you’ve got this face and this body, then why not, right? I’d like to think that, other than her boobs, everything else about Denise, at this point, are all-natural.

Denise was a vision on the red carpet at the ALMA Awards. Her hair color looks slightly lighter here but it still suited her. She barely wore makeup to this event but her beautiful face stood out. She also wore a tight-fitting mahogany dress that emphasized her shapely body and full breasts.

By this time, Denise’s marriage to Charlie Sheen had ended and she became a single mom to two young girls. I’m not sure what happened to her hair in this photo but I hope she didn’t go back to the hairdresser!

Her makeup, however, was the right amount of blush and color. Her skin is also so flawless. I’d say Denise is lucky to be blessed with good skin.

The actress lost a lot of weight and looked slimmer than ever before. She may have been working out because her arms, legs, neck, and shoulders look muscular in this photo. Her face reminds me of a Barbie doll and she’s gone back to being dark-haired, which, to me, makes her look younger.

Denise proclaims she’s embracing natural aging in her late ’40s. She does have a few wrinkles around her eyes and her mouth. However, something about the sides to her nose and her forehead looks unnatural so I really think she’s getting botox.

Denise joins the cast of the popular reality TV series “Real Housewives of Beverly Hills.” If I were to guess, she had lip, cheek and chin fillers to plump up her face so she looks more youthful on television — and she does! I love how her skin glows in this photo.

What did Denise say about cosmetic surgery?

Denise Richards admitted to a boob job in an interview with Daily Telegraph.

“I have only done my boobs and I am very open and honest about that. I have had the same nose if people look it up, and the lips. I don’t do Botox or fillers. And when people watch the show, my face moves, so much that it is distracting actually.”

She also told UsWeekly that she had her first breast implants at 19.

“A doctor put in bigger implants than what I asked for. I was in such a hurry to get them that I didn’t research my doctor. I just thought because they’re a plastic surgeon, they must be good. You have to be your advocate for your own body and ask 100 questions.”

Denise Richards is already blessed with good looks so, for my money, I don’t think she needs a lot of enhancements. She was right to say, however, that if you’re going to get plastic surgery, just like her boob job,  then you should ask many questions before committing to it.

Though she was open about her breast implants, it baffles me that she hasn’t been upfront about her other possible procedures like botox, facelift or lip fillers. Those remain speculative despite indications that she likely got them or is still getting them. Maybe in time, she’ll fess up to it on her reality TV show?

Denise is still one of Hollywood’s hottest babe whether she’s a natural beauty or not. Despite her age, she can still give other younger stars a good competition when it comes to hotness and looks.