Skip to content
Home » Did Melania Trump Have Plastic Surgery Before She Became FLOTUS? 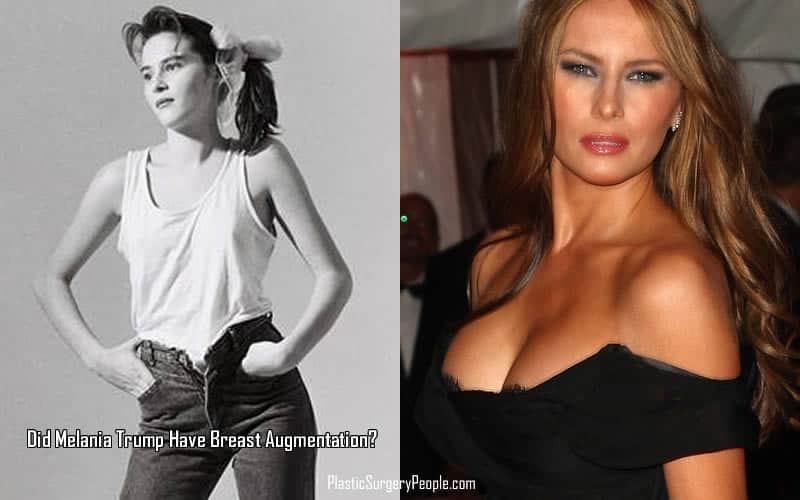 Who would have thought that a Slovenian model would one day become the First Lady of the United States (FLOTUS)? Well…this is certainly the fairy tale story behind Melania Trump’s transformation into the white house!

Melania is a beautiful woman, not just from the outside, but also from the inside as she has shown continuously ever since she took on the responsibilities in the front office. This is most likely the reason why so many people have questions about her looks, whether it is natural beauty or simply the work of cosmetic surgery.

And how can anyone blame them? She’s already caught the eyes of many before she even became part of the administration, thanks to her incredible beauty and of course, her billionaire husband, Donald Trump, a very successful businessman who is now the 45th president of the United States of America (POTUS).

Melanija Knavs (her original name) became a fashion model at the young age of 16. She later changed her name to Melania Knauss as she began her successful modeling career and never looked back since.

Now as famous people and someone who is always in the spotlight, there will always be speculation and rumors about the way they look. This is no different to Melania and is certainly not something that she will, nor should hide away from. However, at plastic surgery people, our job is to present every evidence that we could in the hopes of either debunking a certain rumor or provide some facts for our viewers to decide.

So let’s cut to the chase and dive right into it.

One of the best ways to see if anyone’s had any plastic surgeries is by comparing their earlier photos with the current ones. This will give us a good idea as to the type of procedures that took place.

Did She Have A Nose Job?

Melania’s nose is one of the most beautiful features of her face and is also one of the most talked about and widely disputed topic. Some plastic surgeons have suggested that the First Lady has indeed gone through some type of rhinoplasty procedures which has contributed to her pointy nose tip (rhino), narrowed nasal bridge and nostril reduction. 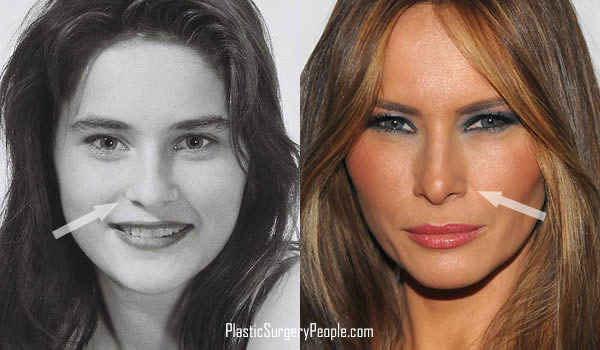 Photo Credit (Left): Stenje Jerko (Right)
As you can see from the before and after photos above, there appears to be some suggestions that the cosmetic surgeons may be onto something here. In all fairness, however, the photo on the left was taken when she was at a rather young age and the nose features could have somehow changed slightly as Melania grew up.

As a former model, Melania has an incredible bust size to go with her amazing body shape and long legs. That’s why some people wonder if she actually had a boob job (AKA: Breast Implants) during her career as a fashion model.

Photo Credit (Left): Stenje Jerko (Right)
The left photo above was taken by a professional photographer, Stanje jerko, back in 1987. This was Melania’s very first photoshoot as a model and she was only 16 years of age at the time. You can clearly see from the picture that her upper body is no where near the breast size, when compared to the photo on the right.

We understand that her breasts may still be developing during those years so this is a rather grey area. Also, with today’s clothing technology, push up bras isn’t necessarily uncommon and there are no reasons to deny that Melania may be using one of these in the photo.

As far as we’re concerned, there’s absolutely no reason why Melania would want an eye surgery, whether it is the size, the eyelids or eyebrows. The truth is, D J Trump’s wife has one of the most beautiful pairs of blue eyes that any woman can ask for. The size of them is in perfect proportion with her face shape, nose and lips. 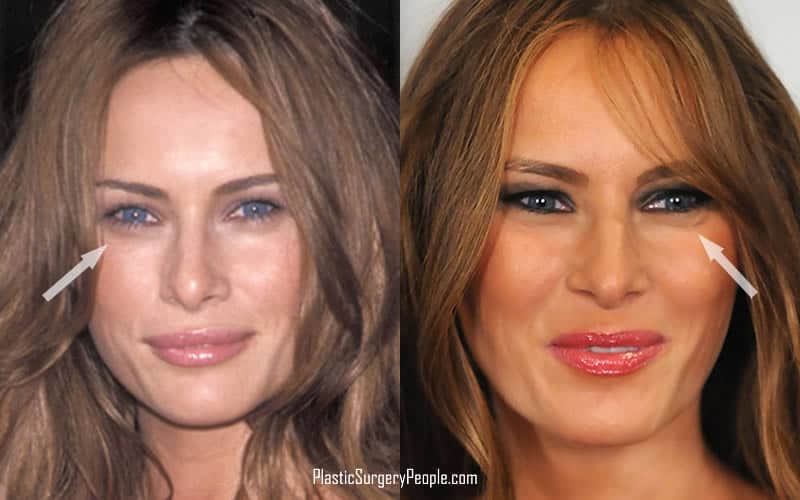 We simply couldn’t find any signs…

In her earlier days, Melania doesn’t seem to put as much makeup on as she does now. Perhaps aging is really catching up to her and that’s why we’re seeing much heavier eyeliners and eyeshadows in those areas.

Without makeup, she appears very youthful and innocent, whereas if you look at the picture on the right, there’s no denying that she looks more classy and elegant. Just how a lady with authority ought to be…

Has Melania Ever Had A Facelift?

Mrs. Trump’s face wrinkles became particularly visible towards the end of 2014, this, however, didn’t seem to bother her, as she hasn’t shown any desire to do much about it, such as undergoing a facelift procedure. 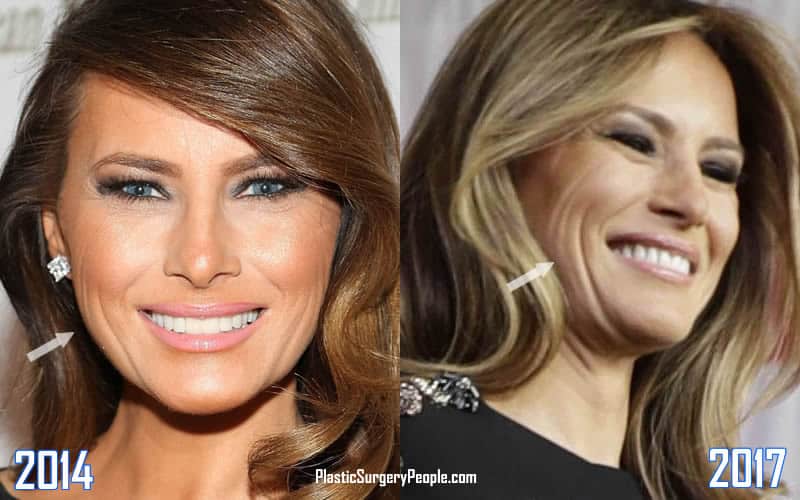 As you can see from the above photos which consist of a 3 years gap from 2014 to 2017. If Melania had really pursued with a facelift or even a face injection such as botox or other fillers, then we wouldn’t be seeing such deep wrinkles around her cheek area every time she smiles or laughs. In fact, these cheek lines have somehow become a trademark of hers these days.

How did Melania respond about her cosmetic surgery rumours?

According to an exclusive interview conducted by GQ, she was asked by Julia Ioffe if she ever had a breast enlargement surgery and this is what she said:

I didn’t make any changes. A lot of people say I am using all the procedures for my face. I didn’t do anything. I live a healthy life, I take care of my skin and my body. I’m against Botox, I’m against injections; I think it’s damaging your face, damaging your nerves. It’s all me. I will age gracefully, as my mom does.

Melania then went on and offered a glimpse of her healthy way of life, and how she’s always taken care of her body while living in New York. She would walk around with ankle weights, eat 7 pieces of fruits each day as one of the many ways to moisturize her skin and that she rarely parties nor gets home late.

We really couldn’t find sufficient evidence suggesting that Melania Trump had indeed gone through any plastic surgery procedures. If she did, then we can only assume that her plastic surgeon, whoever that may be, has done an incredible job at not only enhancing her natural features but leaving no trace whatsoever.

Although there has been a couple of suspicions in terms of her breast size and how firm they are, especially at 47 years of age. It was also quite evident when we compared the size of her chest area at the time of 16 years old. However, this wasn’t enough to conclude breast augmentation purely due to the fact that women’s breasts are still undergoing development until the age of 21.

In other words, her breasts weren’t fully developed yet. Not to mention lifestyle and other external factors that may have contributed to her cup size today. Although gravity should have taken a toll on her boobs already and they should have at least experience some sagginess, but in saying that, it is not unusual for some women to keep their perky breasts at a matured age.

If we had to pick something about Melania, then her forehead is definitely an area that we’ll go to. We simply cannot see any lines or wrinkles on her forehead no matter how hard we’ve looked. So this suggests to us that she may have had some type of injection in that area. But if we really have to go there, then what about her cheek area? Why doesn’t she inject that area of her face when it is so visible??

So…out of respect for our first lady, we decided to give her the benefit of the doubt and conclude once and for all that Melania Trump is nothing short of the definition of the perfect female, the perfect lady. Instead, we’ll pass the ball onto our readers and let you decide whether she is a natural beauty or an artificial one.