Skip to content
Home » Kate Upton: Before and After 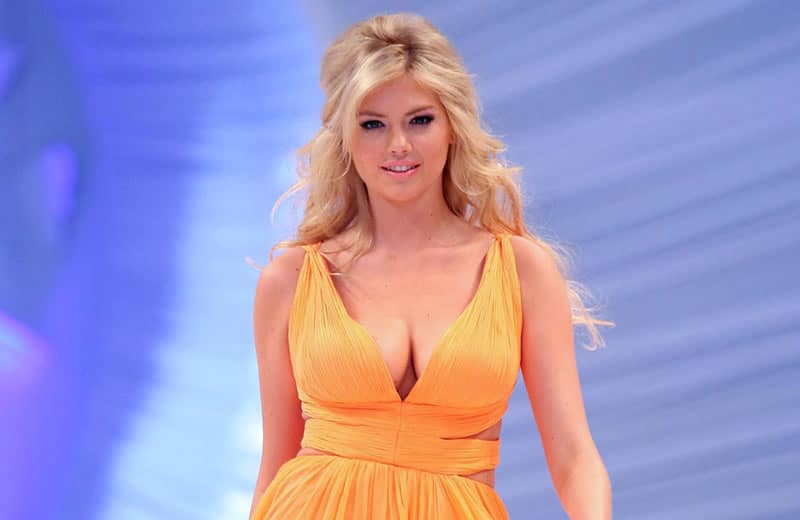 American model Kate Upton is one of the very few who can say that they have been on the cover of the special Sports Illustrated Swimsuit Issue at least four times. It’s an achievement that has bolstered her profile as a hot celebrity but it has also made her vulnerable to plastic surgery rumors.

Ever since Kate’s fame skyrocketed because of her magazine covers, people have been closely checking every flaw or perfection on her face and body. Some wonder about her cup size, while others think she has fake boobs.

Stories about Kate having breast implants and rhinoplasty have been written about numerous times. She has also been the subject of lip fillers rumors.

Cosmetic surgeons from the United States and other countries have also joined in the fray to give their opinions about Kate’s alleged boob job. Her large breasts have been a talking point in many discussions and forums online.

Blessed with striking beauty, Michigan-born and God-loving Kate Upton perhaps never anticipated the impact of her many front covers. She has not acknowledged the rumors about her augmentations, but you’ve got to wonder if she has actually done it.

So what’s real or fake in Kate Upton? Did she really get any cosmetic surgery?

Let’s examine a bunch of photos before and after she became famous. Perhaps, there’s an answer that will satisfy people’s curiosity about her amazing physique.

Does Kate Upton Have Breast Implants? 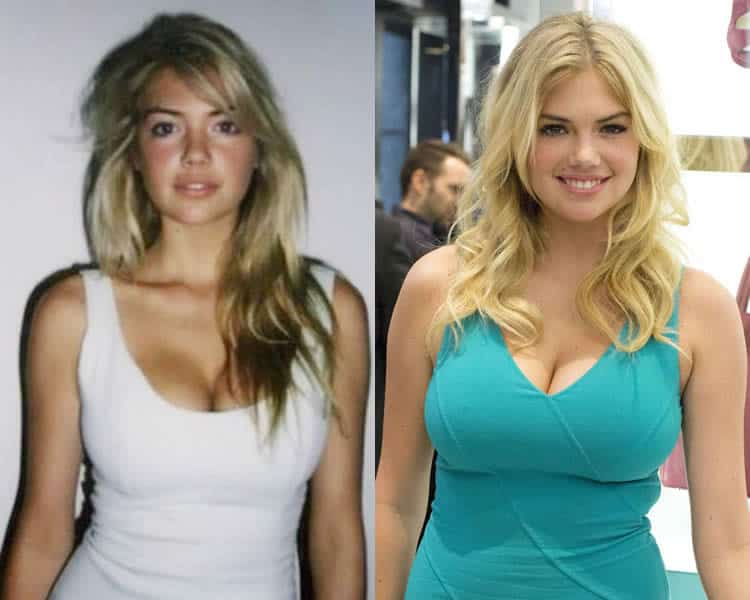 Kate’s boobs are size 34D. The stunner never admitted to a boob job but she said in an interview with The Sun that she wished for smaller boobs every single day of her life.

Having big breasts apparently limited her clothing choices. She can’t wear spaghetti straps without a bra when she just wants to chill. Her sentiments about big boobs suggested that her bust size is all natural.

But there are those who believe that Kate had breast implants. It sprung from a rumor that she supposedly was a 32D before she hit fame. Can you see any difference in her bust size in these photos?

Did She Get A Nose Job? 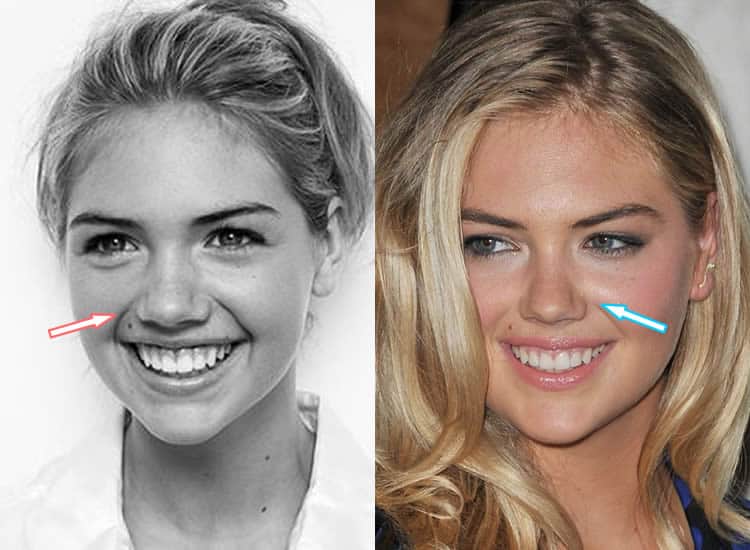 Some years back, Kate mocked the Kardashian sisters for their nose job. Her silly joke on Snapchat became news-worthy but it also led others to wonder if the model didn’t have one herself. The fact that she made a joke out of it suggests that Kate’s nose hasn’t been altered. It’s also a telling remark as it seems she doesn’t believe in plastic surgery.

If you look closely in these before and after pictures, the size and shape of her nose appear similar. Kate might have also used makeup to minimize her nose’s tip and slim down the bridge.

Has Kate Had Lip Injections? 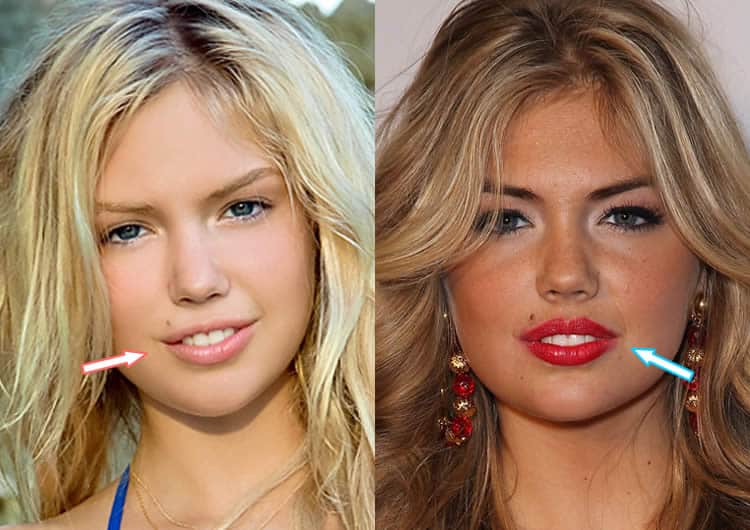 Younger Kate had thinner upper and lower lip but those became fuller in shape and size when she matured into a sexy woman, as seen in these photos. Did she simply learn to choose the right lipstick or does lip injections have a lot to do with her transformation?

While keeping mum about any procedures done to her face, Kate’s lips used to be prominently on many ad campaigns as she was the spokesmodel for Bobbi Brown lipstick.

What About The Rest Of Her Body? 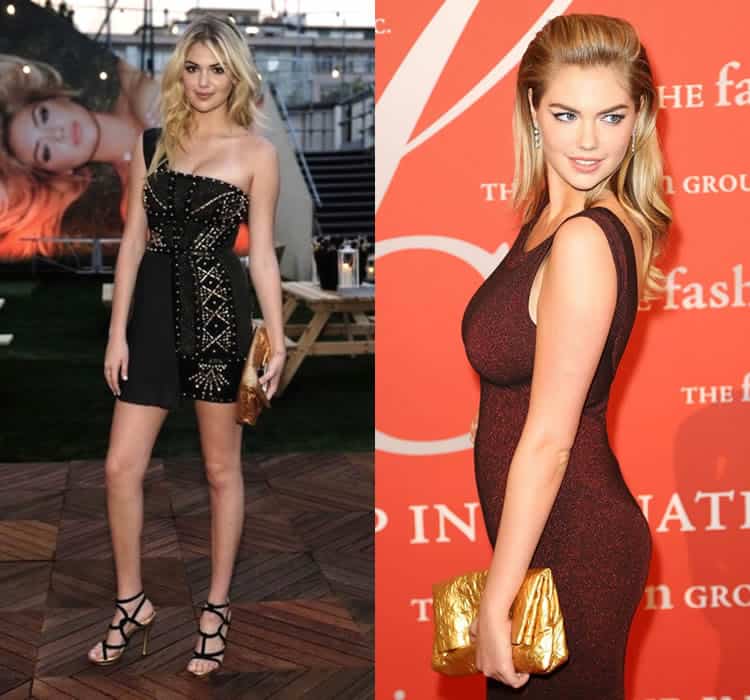 Kate’s body looked slimmer when she was just starting out with modeling. She looked taller and had noticeable long legs, too. A couple of years down the line, Kate appeared to pack a few pounds and wore a lot of baggy outfits when she was not working. Then she shaped up yet again.

People thought Kate had liposuction to help regain her slim body. Cosmetic surgery expert Dr. Tal Roudner, however, told Life & Style mag that he thinks Kate is a natural beauty. The expert doesn’t believe Kate got any procedure at all.

Beauty expert Jennifer Leebow of Beauty Bar also doesn’t think Kate had any work — such as a butt lift — done on her. If anything, the model could have lost weight through a workout or diet rather than plastic surgery.

Speaking with Cosmopolitan, Kate’s trainer Ben Bruno said that the model does a lot of strength training to keep her body in the best shape and form. As much as possible, she also stays away from sugar and processed food.

Let’s see how the gorgeous model’s looks and styles have changed through the years. This ensures that we will not miss any cosmetic surgeries or beauty enhancements. 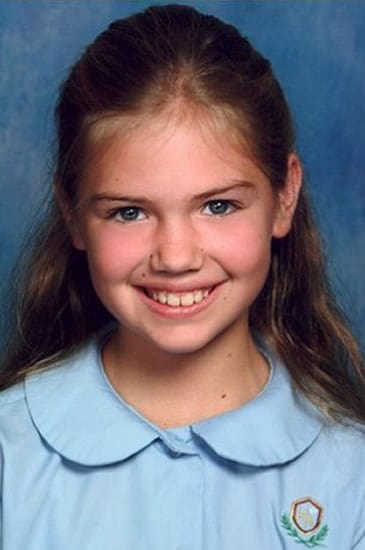 Pretty Kate looked so adorable when she was young. As a child, she wore her hair long and her teeth were spaced out unevenly that she might have gotten braces to fix it. But look closely at those prominent cheekbones — she already had the makings of a model back then. 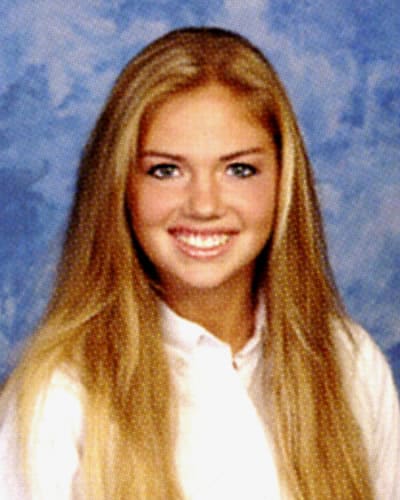 Kate was a stunner as a teen and here’s the evidence from her yearbook photo in high school. Blonde with long hair and a gorgeous smile, it seems Kate didn’t have an awkward teenager phase growing up. 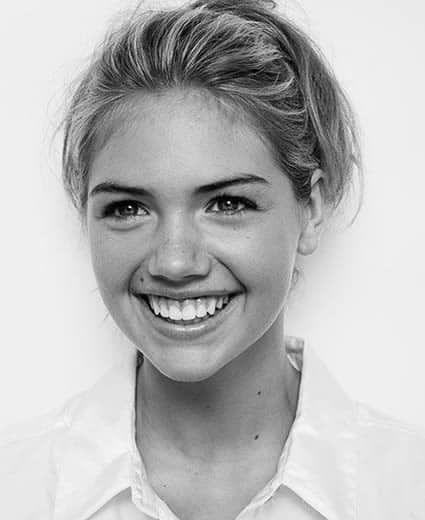 Kate moved to Miami to sign up with the Elite Model Management and she was already a standout at 16 with her beautiful eyes and fetching smile.

The model had a small face shape that made her nose and chin quite noticeable. But similar to her appearance as a little girl, her cheeks remained distinct. She had prominent gumlines too, and it was part of her appeal. 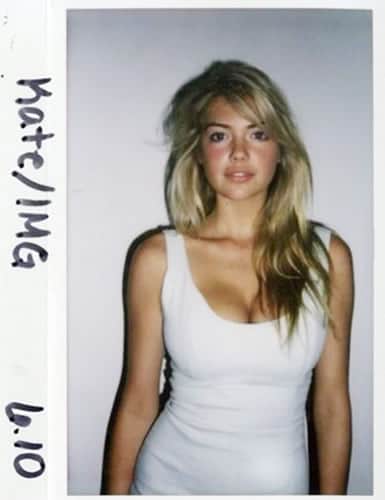 This polaroid photo of Kate at 18 kicked off her career in a big way, as she nabbed the ad campaign for Guess. She looked so real and natural in this photo, even with her busty frame.

Her breast size was so obvious in this white dress that hugged her upper body in all the right places. 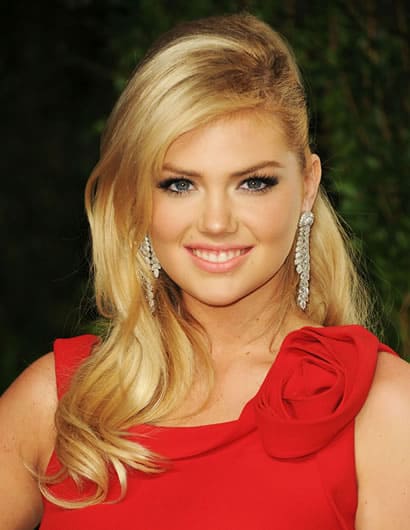 Kate showed up at a Vanity Fair Oscar party looking rather elegant with her earrings and hairdo. She had gorgeous eye makeup on and her eyebrows were perfectly brushed in place. Her pink lips were a lovely contrast to the red dress she wore.

People speculated she had a nose job because of this look. Do you agree or do you think it’s just good makeup? 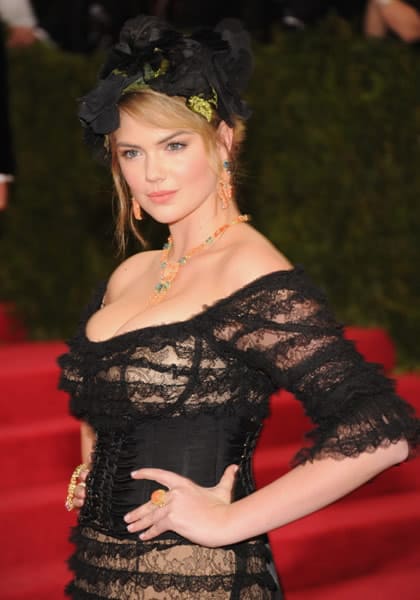 Kate looked like a French maiden during the Met Gala. The dress emphasized her cleavage and boobs but she also made sure to draw attention to her colorful matching earrings and necklace.

She capped her look with a stylish hair piece and yet people still can’t help but speculate she had breast implants because of this look. 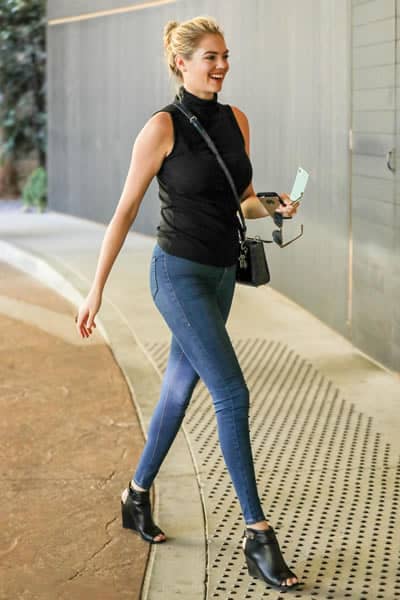 The supermodel goes for simple fashion as her street look, yet she’s still a knockout in these basic jeans and black top. Her shoes worked to accentuate her shapely long legs and height. 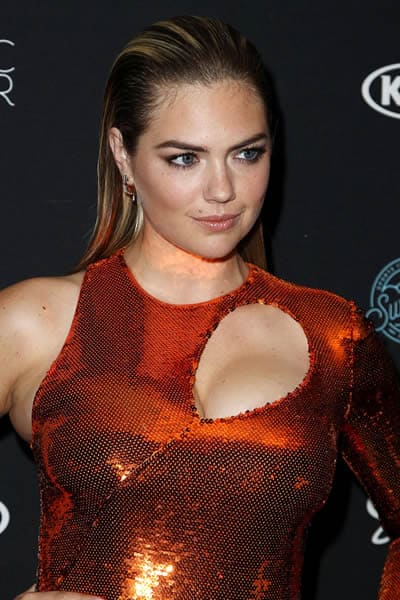 Kate attended the recent Sports Illustrated Swimsuit party wearing a sequined outfit that emphasized her chest. She also had a brushed up hairstyle that showed off her face, which had the bare amount of makeup.

Her dress made people do a double take. It had them wondering about her bra size, for sure. In the same way, that the mole on her face also likely drew attention.

Do you think she had lip fillers here?

What Does Kate Have To Say About Plastic Surgery?

While the supermodel has never directly addressed any rumors about her appearance, it’s interesting to know that she wasn’t always confident about her body.

After my first cover, critics were discussing whether I was fat or not. I had this huge moment in my career and they were tearing it apart.

Thankfully, she didn’t let the haters get the better of her.

I have to thank the people who did that because it really made me sit back and find out who I was and what meant something to me and how I thought about my body.

Surprisingly, she wasn’t always happy about her breasts, but after reportedly telling a UK media about wanting smaller size boobs, she told a different story on an Australian radio station, 2DayFM.

I actually didn’t say that. I love my body…

And yes, it was on video so check it out:

Unfortunately, what was said about my body is completely made up to try and drum up controversy where there is none. Like every woman,

I have moments of insecurity, but I love and am proud of my body — every part of it — and wouldn't change a thing.

While we know she won’t be getting a breast reduction any time soon, she made a mockery of the Kardashians by writing this on her snapchat caption with pouty lips.

I look like a Kardashian, nose job and all. 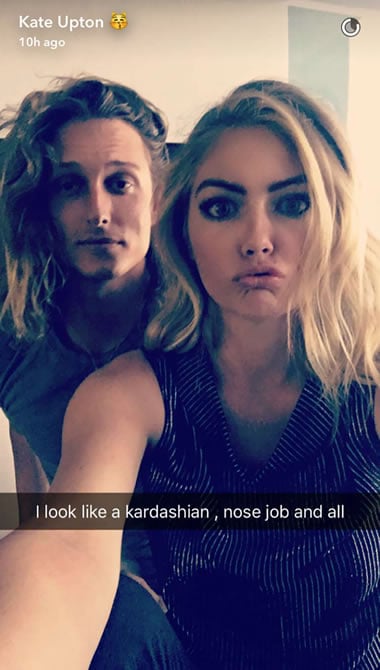 Perhaps this was her way of telling the world she has nothing to do with plastic surgeries?

The first thing people notice about Kate Upton is her boob size and it would make sense for some to think she had breast augmentation because of how large it is compared to her body.

But Kate has suggested that she hasn’t had any plastic surgery. Top beauty experts also don’t think she had any other unnatural changes to her face and body. So, all those talks about her nose surgery and lip injections have no bearing.

Rather, Kate’s beautiful face and hot shapely body are naturally enhanced through makeup and a good exercise and diet. She also has a trainer who makes sure she works out and follows a meal plan. She’s likely to appear on more Sports Illustrated Swimsuit issues with the way she takes care of her physical assets.