Skip to content
Home » Does Gigi Hadid Have Cosmetic Surgery? 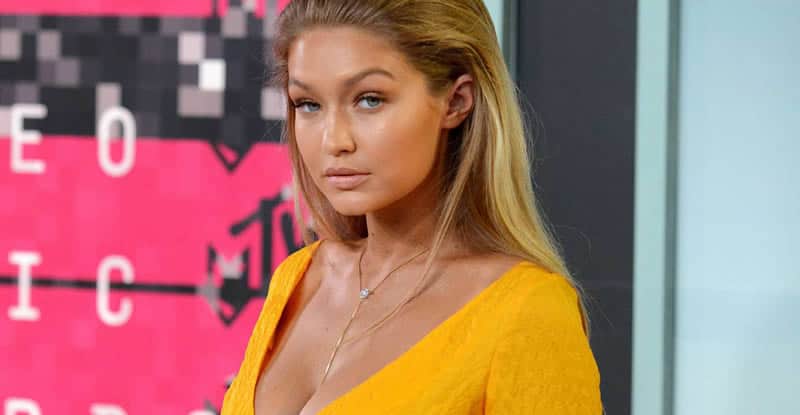 Whether Gigi Hadid had plastic surgery or not, she’s definitely one of those lucky children who’s inherited her mother, Yolanda Hadid’s beauty. Like her sister, Bella, who also happens to be one of the top models in America, Gigi has been featured in numerous publications including the Vogue, CR Fashion Book, Allure, W Magazine and more.

In fact, Gigi started her modeling career at just 2 years old after being discovered by Paul Marciano from Guess Clothing. She has done several campaigns for Baby Guess products before putting her focus back on school.

Now if that’s not good genes, we don’t know what is because there is just no way she would have been able to obtain cosmetic surgery procedures at such a young age.

But then…what about later on when she came back to modeling in 2011? She had the perfect face and body, which allowed her to win the title “Model Of The Year” in 2015 and even became an ambassador for the Maybelline brand.

Wouldn’t life be too impeccable (or unfair) if she didn’t have at least a tiny bit of flaws? That’s why people started speculating about her pretty face. Some think that Gigi had a nose job while others are certain that her chest is made up of entirely breast implants.

But are these rumors real or fake?.

One of the best ways to find out if Gigi Hadid has undergone any plastic surgery procedures is by going through her past and present photos. This will allow us to compare and check discrepancies between her facial features such as her eyes, nose, ears neck, as well as parts of her body.

Check out our exclusive before and after pictures below:

Did Gigi Get A Rhinoplasty? 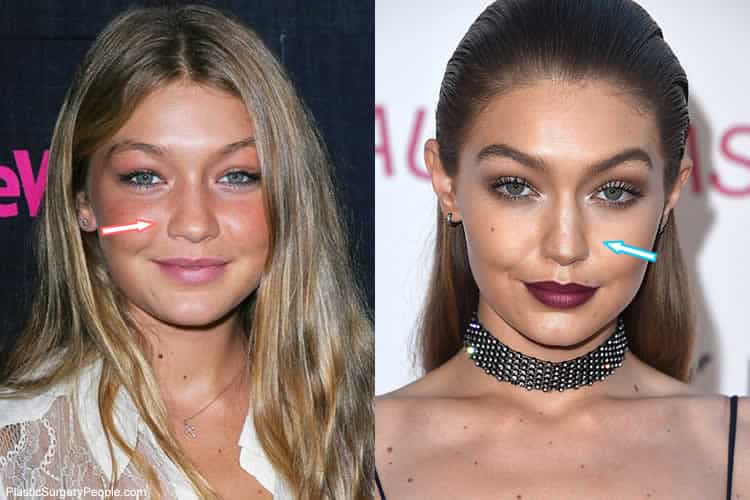 Like one of her besties Taylor Swift, Gigi has had her fair share of scrutiny regarding her own nose. Based on the above before and after comparison, we can definitely see some differences there. Her nasal bridge is visibly thinner and if you look carefully at her nose tip from before, she had a lot more volume around that area. It was rounder and bulkier so with this, we believe there’s a good chance that Gigi had undergone a nose job.

What Happened To Gigi’s Teeth? 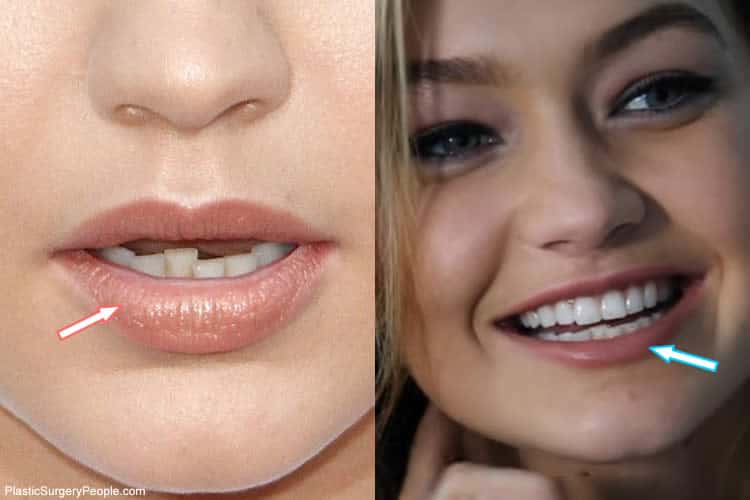 Gigi’s always had a gorgeous smile thanks to her beautiful teeth, the top row that is. Little did people know that Gigi actually has some crooked teeth on the bottom row. As you can see from above, she hasn’t visited a dentist to have them fixed and we’re not exactly sure why because this is a common problem for many females and can easily be corrected by using a cosmetic dental device such as braces or aligners.

It’s also obvious that she’s had some teeth whitening done because they are sparkling white!

Has She Had Lip Fillers? 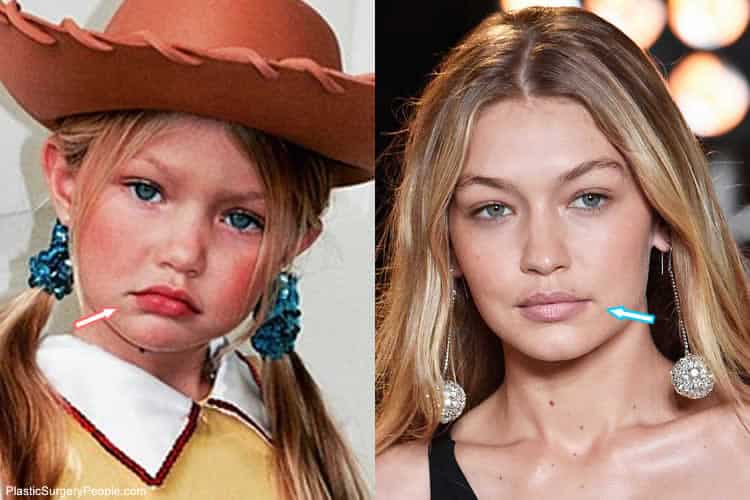 Unlike the lips of Kendall Jenner, Gigi was born with thick lips so it’s been in that shape ever since she was young. Compare that to how it is now, you can’t really see any signs of lip injections. So based on this comparison, we believe that she was naturally gifted with plump lips and do not believe Gigi has gotten any lip fillers whatsoever.

Does Gigi Hadid Have Breast Implants? 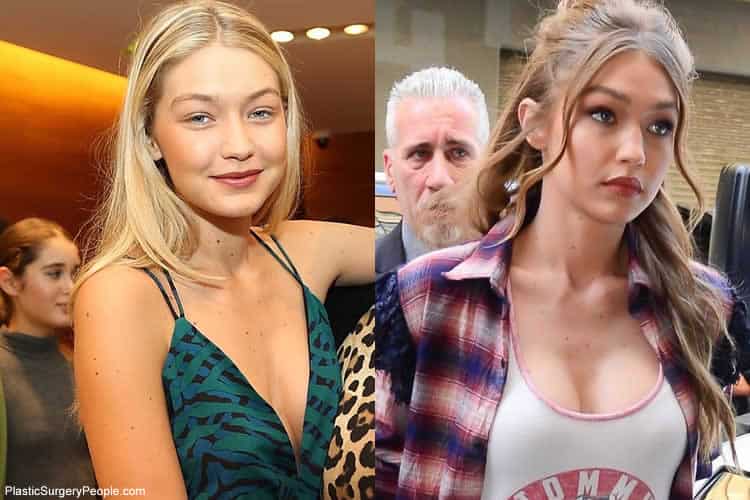 Many of Gigi’s fans and followers wanted to know whether her breasts are real or fake. This is one of those difficult problems to solve because there are times Gigi’s boobs appear to be very natural, but then there are other times where we’re almost certain that she’s had a boob job.

Being a professional fashion model, there are not many reasons for her to go through a breast augmentation procedure unless she’s focusing on the swimsuit niche, which she’s obviously done many times for magazines such as Sports Illustrated. These days, implants come in all different shapes and sizes, so it is possible that she’s gotten a teardrop shaped implants because these tend to look more realistic.

While we have uncovered some evidence suggesting that Gigi may have enhanced her beauty through the help of plastic surgeons, but as we always say…camera angles can be deceiving. Therefore, we feel that it is only fair to go through Gigi’s “Then” and “Now” photos to see how she’s transformed into the supermodel that she is today.

Talk about starting them young! Gigi was only a 2-year-old toddler when she gained her first modeling experience doing photoshoots for Baby Guess. Just look how cute she was! Big and beautiful blue eyes that turned blueish green as she grew older. You’ve got to love those chunky baby lips too… (yup, that’s her!)

Yolanda: “No honey, you’re going to be America’s next top model.”

At just 6 years old, Gigi is already showing how comfortable she was posing in front of the camera. Here she was shooting another campaign for Baby Guess wearing a pink bandana, sleeveless orange jumper and long flower patterned pants with style. You can almost tell she’s going to become a tall and slim woman.

Gigi is looking sweet and sweeter with this “good girl” hairstyle and minimalist makeup. The red lip gloss is contrasting beautifully with her white skin and blonde hair. You can see that her eyes are also starting to change into blue-green colors, but what impressed us the most is her pretty eyelids. At least we know she’ll never need a double eyelid surgery.

Here she was wearing classic blue jeans with a red belt along with a vintage hairstyle dating back to the “Grease” age. Who would have thought that the ladder she’s stepping on would one day take her to the very top!

This was the last Baby Guess collection that we’ve seen from the young Gigi Hadid posing as a child model. At 11 years old, it was time for her to focus back on her studies and school. Not sure if that was her mom’s decision though…

Fast forward 5 years, Gigi is back to the scene only to be told that she was too fat and needed to lose weight if she wanted to pursue a modeling career. As you can see from the pic, she definitely had some big thighs back then so it’s quite possible that she’s had a leg contouring procedure done.

Honestly, she better do something about that butt too, maybe get it toned down a bit and then a little butt lift? On second thought…perhaps she already had it all figured out and using cosmetic surgeries was all part of the grand weight loss plan after all!

After some successful body transition, Gigi was named the face of Guess in 2012 and began working as an adult model shooting 3 more campaigns for the big brand. One of the most distinctive features on Gigi’s face has to be the baby fat on her flush cheeks. So plump, so squooshy…so cute! Looks like she won’t be needing botox any time soon.

Here she was shooting an advertising campaign for Guess Jeans. At the same year, Gigi moved to New York and signed with IMG models, officially beginning her professional career as a fashion model. Little did people know she was still studying in college and you’ll never guess what course or subject – It’s Criminal Psychology!

You can see that her body is becoming more lean and slender, but whether that’s through exercise workout, good dieting or liposuction fat removal treatments…no body knows!

Miss Hadid attends the Vanity Fair Oscar Party hosted by Graydon Carter at the 2014 Oscars in West Hollywood, Calif. This was perhaps the year when rumors started circling about Gigi getting breast implants and it was also the same year she made her debut in the New York Fashion Week and got into high fashion featuring in the front cover of CR Fashion Book magazine.

Not sure if you noticed this, there’s something not quite right with her eyebrows here. It seems as though her brows have been lifted. It could be her makeup and we’re sure it’s still too early for her to have a brow lift, so never mind…

It’s not often you get to see a picture of Gigi without makeup on. Regardless, she still looks totally gorgeous and maybe this explains why she won the 2015 Daily Front Row’s Model of the Year award and also landed the ambassador role for the international makeup beauty brand, Maybelline.

So far, we haven’t spotted any evidence suggesting that the social media model had undergone any facial plastic surgeries of any type. No facelift, jawline reduction, chin implants or any other face contouring procedures. She better watches those baby fat though, otherwise, she might end up with a double chin.

At the rehearsal for the 2016 American Music Awards in Los Angeles. Now if you would have told us that Gigi has never had a boob job, we’ll 100% believe you! It’s photos like this that makes us question whether her large bust size has always been the result of a push-up bra. Her cleavage just seems natural here.

In saying that, if Gigi had indeed gone through a breast augmentation surgery, then you’ve got to admit that her plastic surgeon has done a truly remarkable job here! By the way, she’s looking outrageously hot with that shirt and red lipstick.

Ditching her blondes for the all new copper brown hair, Gigi reminds us of the younger version of Angelina Jolie with the same natural luscious lips. Along with the smokey cat eyes and thinning nose, you’d have to think twice before deciding whether her nose shape was the result of using good shadow makeup techniques or surgical cosmetic rhinoplasty.

You can also see that she has a lot of moles on her neck and chest area, so one has to wonder why she hasn’t gone to a dermatologist to remove them? Perhaps her boyfriend thinks they are sexy…

Gigi is sizzling on the catwalk for the Alberta Ferretti fashion show in Milan, Italy. She is looking as healthy as ever in this black swimsuit showing off her long legs and beautiful broad shoulders.

What Does Gigi Have To Say About Plastic Surgery?

During an interview with Dazed Magazine, Gigi was asked to give her views on plastic surgery. Here’s what she said…

I think that, for health reasons that I’ve learned about, and through seeing other people’s experiences with it over the years, I would personally not do it. But it’s anyone’s decision to do what they want.

You just have to wonder “who’s” experiences she was referring to…friends or family?

With over 38 million followers on her Instagram account, there’s no denying that Gigi is one of the most beautiful and sexy women alive. It’s quite obvious that she was born with some genetic advantages (that means plenty), but has she ever seek help from cosmetic surgeons to get closer to perfection?

After going through her before and after photos, there appears to be some evidence suggesting that model might’ve had a nose job to narrow her nose, liposuction to help with weight loss and possibly tear drop shaped breast implants too. Other than that, we are certain Gigi’s lips are the real deal.

While she has never admitted to any of these rumors, but given that she has a rich family, so it’s not impossible for her to access the best cosmetic surgery clinics in America.

Did Gigi have beauty enhancements?