Skip to content
Home » Kylie Jenner, Before and After Transformation 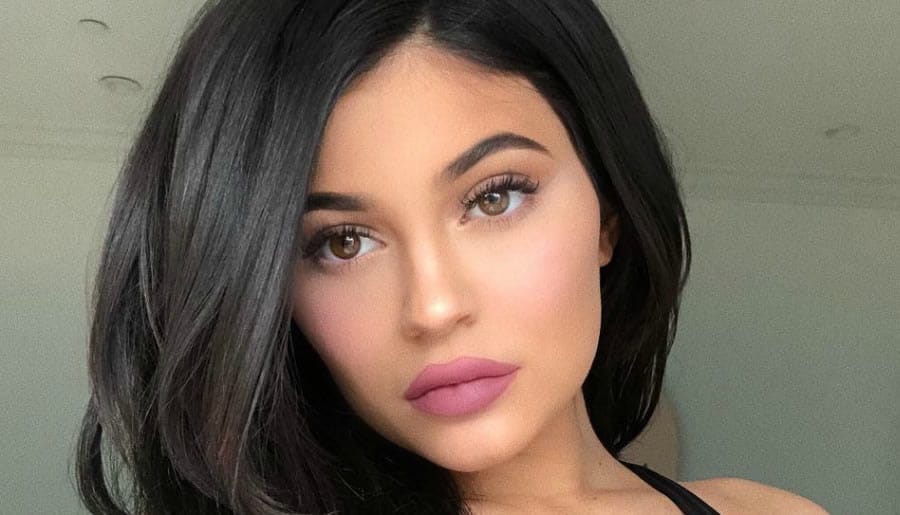 Kylie Jenner is a knockout alright, but the reality TV star took pains to enhance her appearance with plastic surgery. She’s used to defending herself from critics who call her out for going under the knife. But as a celebrity who’s constantly being scrutinized for everything she does, she’s pretty lighthearted about all the rumors, speculations and criticisms.

The “Keeping Up With the Kardashian” star told ES Magazine in one interview with sister Kim Kardashian that she’s not opposed to cosmetic procedures. But while she did not admit to rhinoplasty or a boob job, as were speculated, she said that if cosmetic surgery makes one feel better, then she’s not against it.

Kylie has admitted, however, that she has been getting lip injections since she was 15 years old. In fact, her full lips have become her signature look.

But if she’s open about this dramatic transformation, what else could the reality TV star have actually done to her face and body? Fans speculate that Kylie has fake boobs and butt. Like her half-sister Kim K, she has been rumored to have gotten bum implants and other augmentations to her shapely body.

In order to find out the exact type of beauty enhancements that Kylie has gone through, we’ll compare her before and now photos. This should help us see any inconsistency and find clues to her cosmetic surgeries.

So, let’s get started!

Did She Get A Nose Job? 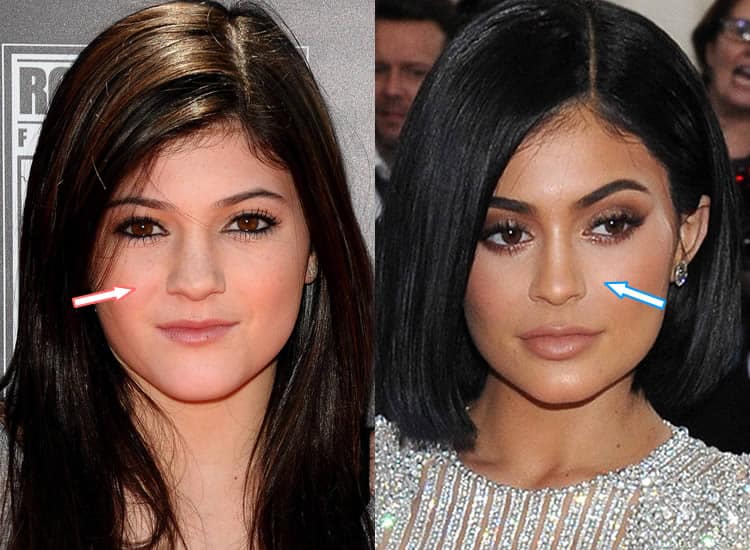 Kylie once said in an interview with Complex Magazine that she likes her nose the way it is. This implied that she did not get a nose job, but the rumors persisted.

Not long ago, Kyle’ nose was a lot different in shape and size. Her nose profile was a bit wider and its tip was also bigger in her before photo. But in her after photo, you can actually see that the nasal bone on her nose bridge has been slimmed down.

Kylie, however, might simply have done wonders to contour her nose with good makeup. After all, she loves her contouring stuff so much that she build a business empire out of this passion.

Does Kylie Jenner Have Butt Implants? 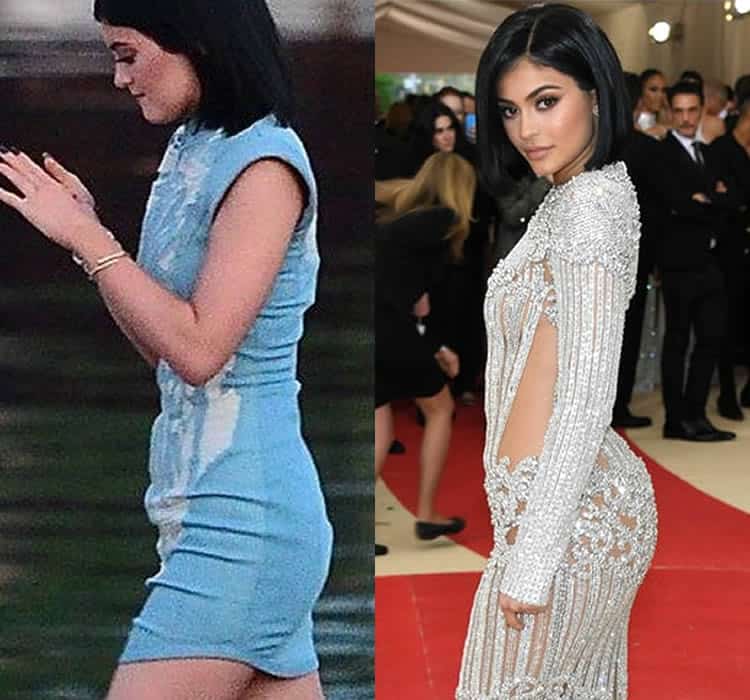 Kylie and several of her sisters are famous for their bum size, but she said in another interview that she’s aware she doesn’t have the biggest bottom in the family.

Kylie’s butt has been the subject of rumors and criticisms since she’s always posting sexy photos of herself on social media. Fans point out she might’ve had butt implants; they scrutinize her photos for the indention marks.

The star, however, shot back at a critic once and said it’s not butt injections that changed her butt size and gave it a lift. She said it’s thanks to Spanx. She denied she had any augmentation done on her bottom.

What can you say about this from looking at the comparison above?

Did Kylie Have Breast Augmentation? 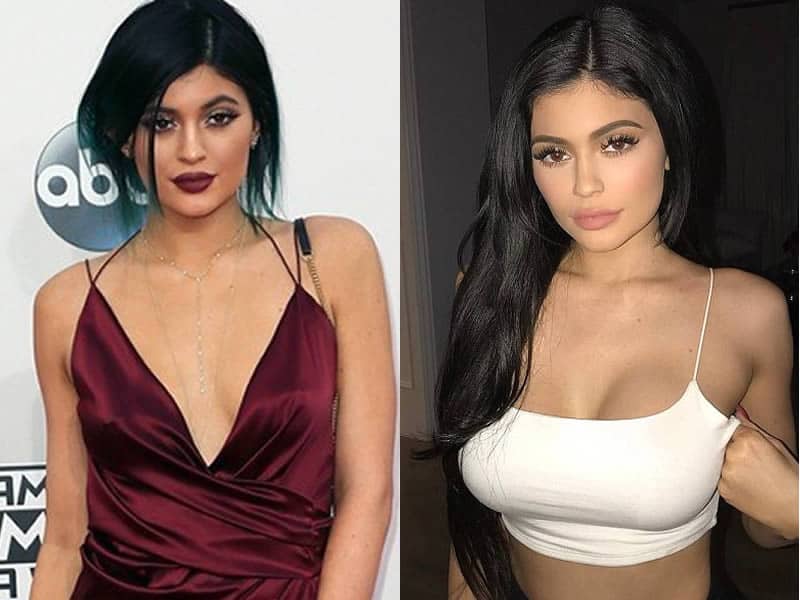 Getting breast implants seems like a given if you’re always gonna be on the screen and in magazines. But Kylie has also addressed critics who kept saying she had a boob job with a video posted on Snapchat.

She posted a denial about her new breasts and its cup size increase in a video linked to her app. Kylie’s boobs, apparently, look huge thanks to a Victoria Secret Bombshell bra. She swears by it so much that she said she gifted all her sisters and friends with the very same bra.

However, a London-based surgeon gave Kylie’s photos a quick look and concluded this youngest Kardashian Jenner sister got help from plastic surgery. Her well-contoured cleavage gave it away, according to Dr. Maurino Joffily.

Did She Have An Eye Surgery? 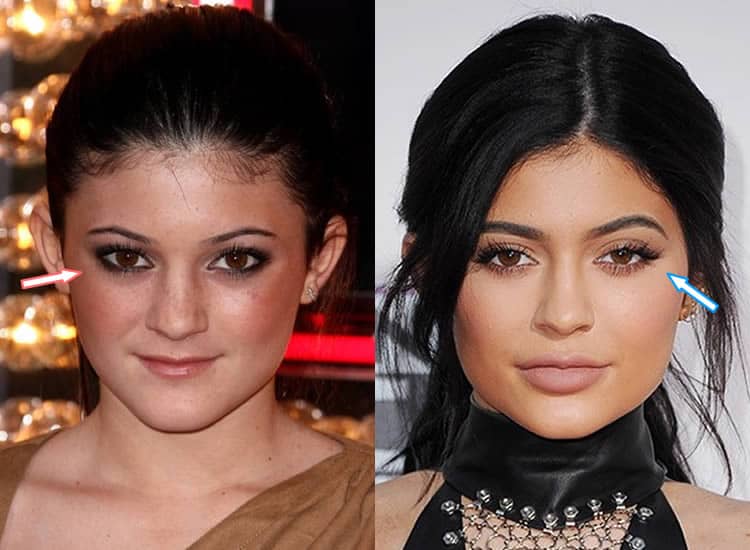 Kylie loves playing around with her eye shape and eyebrows with makeup a lot that she formed a cosmetic line dedicated just for this. Fans, however, can’t stop wondering if she got an eyelid surgery because her eyes used to look so different, as seen in these before and after pictures.

Kylie’s eyes seemed to have been reshaped and enhanced with an eye lift. A brow lift might have also opened these up even more to prevent sagging eyebrows and droopy eyelids.

Of course, the eyelashes did wonders too!

What Did Kylie Do To Her Face? 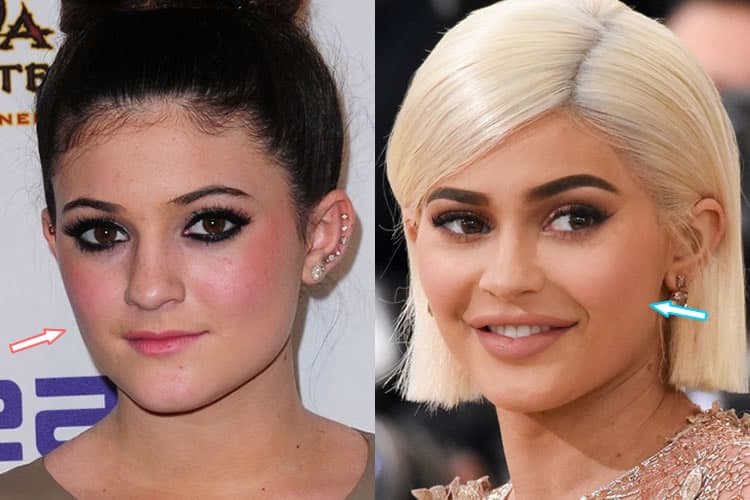 A lot of plastic surgeons agree that Kylie had enhancements done to her face given how much it changed. Its shape used to be a bit on the square side but now her face is rounder and softer. Experts said she had cheek fillers and botox to soften her face’s shape.

The star is aware of all the talks regarding her alleged face surgery but she shot down her critics yet again in a Cosmo interview.

To answer those facelift and botox rumors, Kylie said that she looks different from her old face now because people are still fixated on her as a 9-year-old kid on television. She said that she’s now a grown-up who knows how to do her makeup. The statement suggested that Kylie’s face change is all due to makeup contouring, not cosmetic surgery.

Has Kylie Jenner Had Lip Injections? 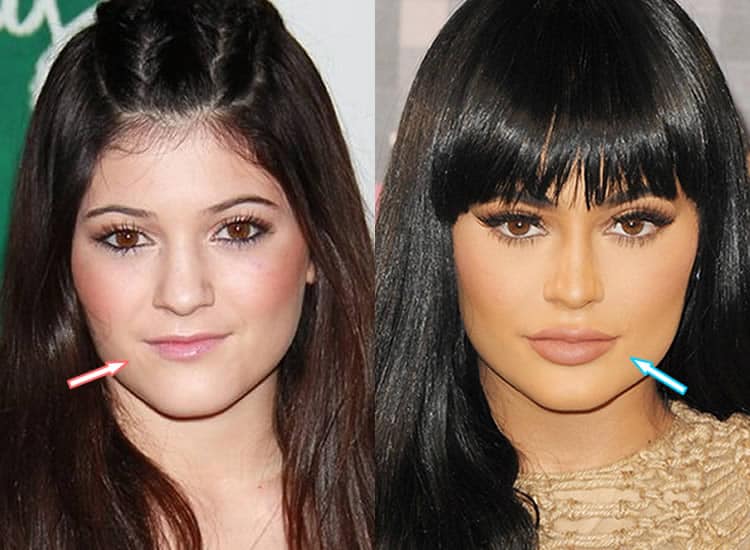 Of all the speculations about her enhancements, Kylie has admitted to getting lip injections from Dr. Simon Ourian in Beverly Hills.

Her old lips did not lack volume but it looked quite thin when she was younger because her lower face had wider jaws, as seen in this before pic. Kylie herself said that she had lip fillers to improve her mouth shape because her pronounced jaws made it look like it was sunken in.

But people have remained critical of Kylie’s lips throughout the transformation. They now say that it looks too big and far from reality because she had too much of it.

What About Cosmetic Denistry On Her Teeth? 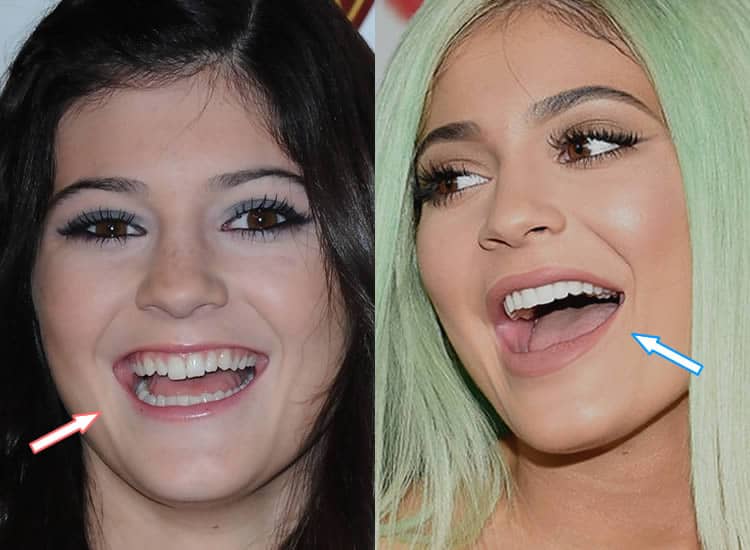 Experts all agree that Kylie had a full mouth makeover. She didn’t use to have a pretty smile during puberty, as Kylie’s teeth were crooked and slightly dull in color. Now, she flashes those pearly whites proudly after a complete improvement.

Though Kylie promoted a tooth whitening kit she uses, dental experts said there’s more to that Hollywood smile. They believe that her perfect set of teeth is courtesy of porcelain veneers.

We’re not sure, however, if Kylie got braces as a young kid because between the two Jenner sisters, it was Kendall who wore braces for quite a long time, while Kylie endured a freckled face.

While the cosmetic enhancements have brought fame to this young celebrity to a certain degree, viewers have literally seen her grew up on television. Let’s see how Kylie’s appearance has changed through the years. 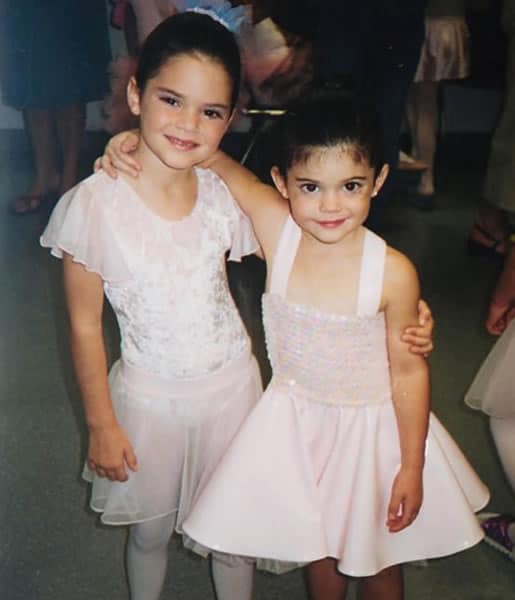 Kylie and sister Kendall looked so cute in their ballerina outfit. When she was young, little Kylie was quite perky and playful. As a small child, she already had rounded big eyes that would soon be one of her best assets as a celebrity beauty. 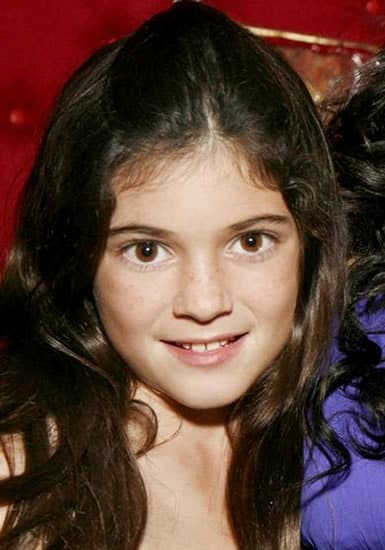 This was her debut year on television as part of “Keeping Up With the Kardashians.” Notice her thin lips and face shape before her dramatic transformation? 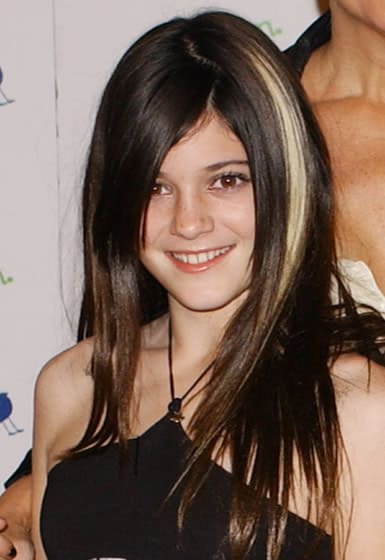 Kylie experimented with hair highlights as a middle schooler. We like this spunky hairstyle!

This phase tells us that she’s finding her look and she’s trying to find her own styles to become a future person of influence in the media. 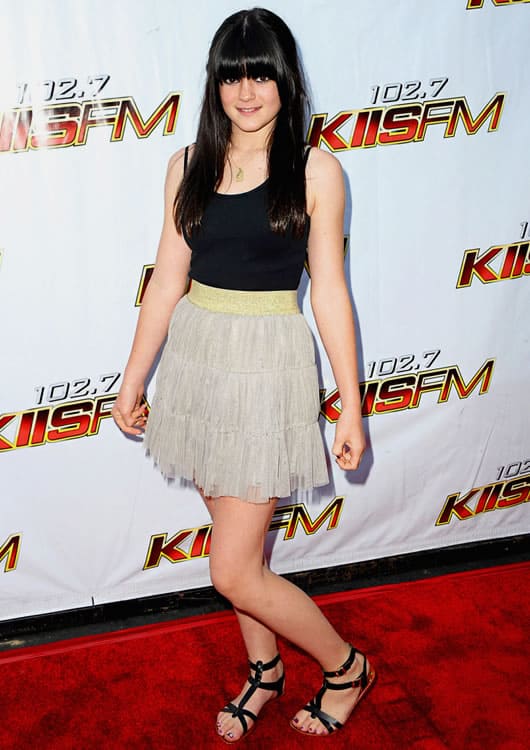 Pretty Kylie Jenner was still outgrowing her baby fat in her arms and legs. She had a bit of a chubby body shape in her teens, but don’t we all go through this phase? 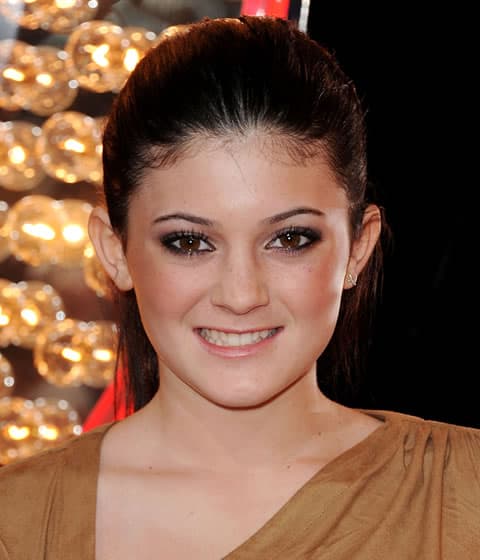 As a rising TV star, Kylie has been learning her way in the business. This might be the most natural-looking phase of her life. Notice the thin lips and the imperfect set of teeth? Her cheeks also don’t look fuller compared to today and she had bigger ears then. 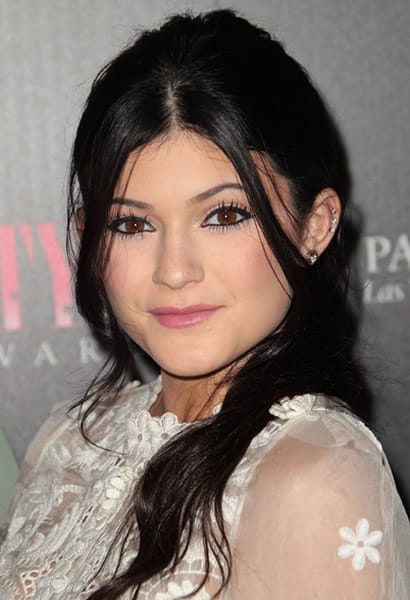 The beauty transformation began with makeup. Kylie wore the right lipstick shade for her age but we can’t help but notice her strong jawline. The star did say that her jawbone is quite big, so she contours this with cosmetics a lot. 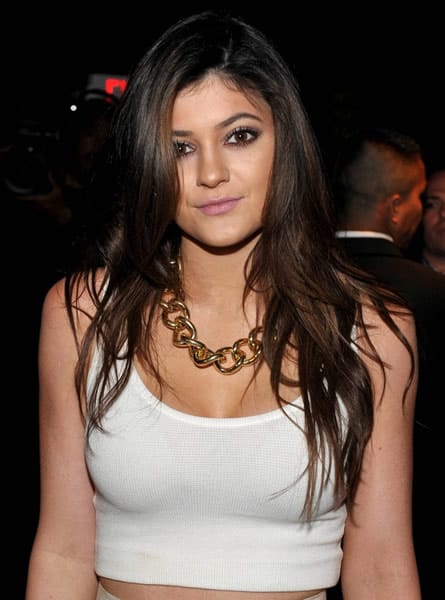 Kylie’s choice of a top emphasized her chest. Did her boob size increase because of her bra or has she started getting breast implants around this time?

The TV star’s tussled hairstyle looks perfect but fans could not help but compare her to Kim because this was her big sister’s signature look for quite awhile. 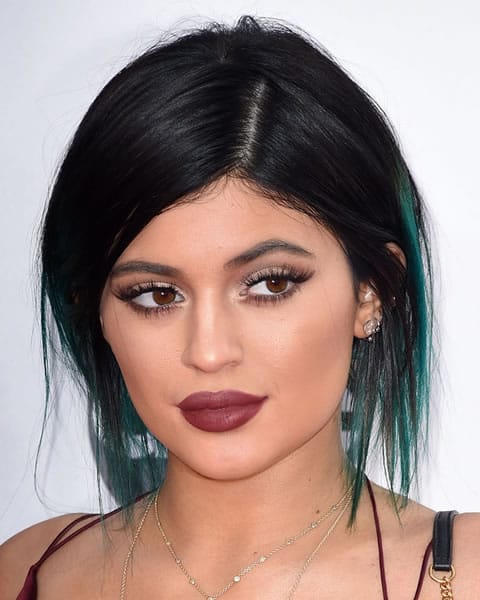 Kylie Jenner shocked the crowd as she emerged with a new face at the American Music Awards in LA. People buzzed that she had lip injections because of how much fuller and plump her lips look. They also speculated her of getting a blepharoplasty because of her more prominent eyelids.

Kylie also started the trend on eyelashes that made her gaze sexier. Fake eyelashes have become a beauty staple among women today, somewhat inspired by this beautiful girl. 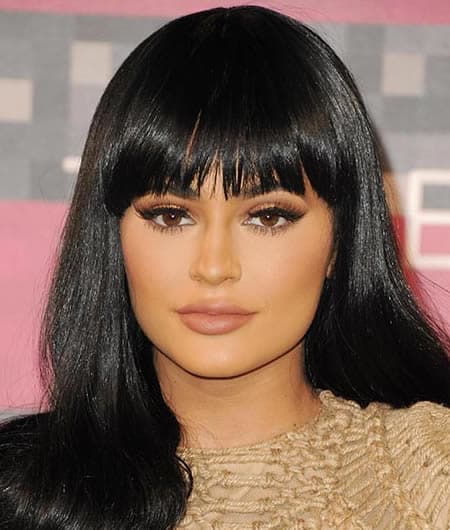 Kylie walked the MTV Video Music Awards red carpet with golden skin color. People talked about her smooth face, which they suspected was the work of botox. There was also a level of puffiness to her cheeks, so if it’s not cheek implants, then face fillers may be at work here.

She might have also debuted her new nose job, as you can see the thinning on her nasal bridge and sharpness on the tip. Along with those big lips, her beauty transformation has definitely soared new heights! 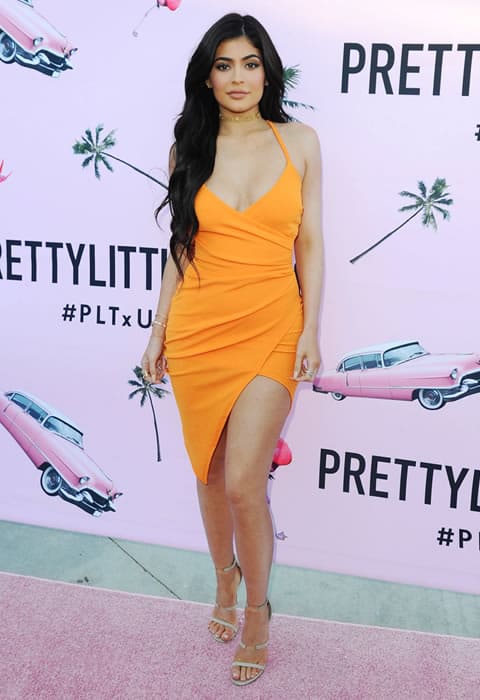 Here she was attending the launch party for “Pretty Little Thing” wearing a show-stopping dress that emphasized her sexy body and showed off her hot legs. Kylie’s breasts looked natural here, but people were also drawn to her flat belly and suspected she had liposuction. 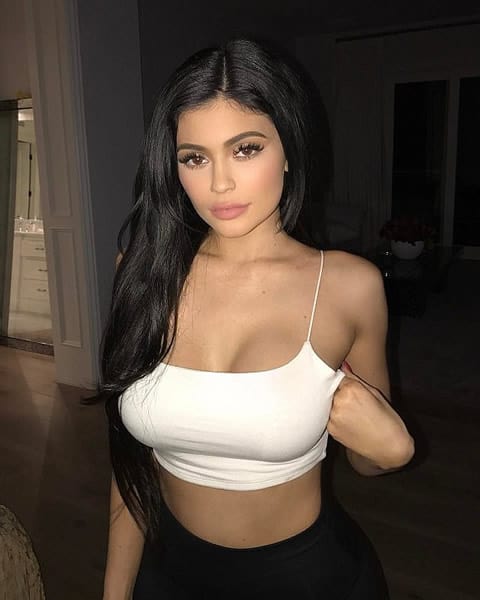 Following reports of her pregnancy, Kylie, who has endured boob job rumors for so long, posted a photo of herself with undeniably bigger boobs on Instagram. Did her bust size increase naturally because of pregnancy hormones? Did she have butt implants around this time, too? 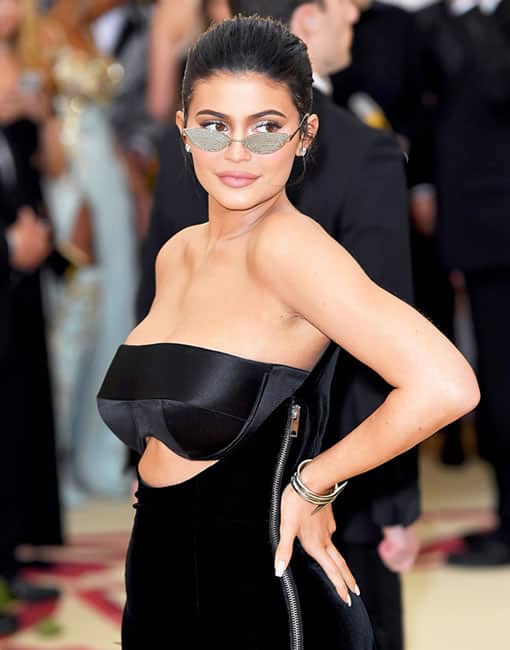 Kylie debuted her post-baby body at the Met Gala, after giving birth to a baby girl, Stormi Webster. People doubted she slimmed down with the help of diet and exercise though. They think lipo helped with her flat belly and she might’ve had a tummy tuck too, although we have yet to see any post-pregnancy scars.

So far, a lot of boxes has been ticked. Kylie has admitted to lip fillers, so we can file that under “confirmed.” Cosmetic surgeons also attest that she had botox and eye surgery, despite her denials.

While she never said anything about her breast implants or butt augmentation either, Kylie will always be hounded by plastic surgery rumors for the rest of her life. People will keep talking about what’s real or fake about her.

As a Kardashian Jenner, it goes with the territory. Her beauty evolution will always be in the news and that’s perhaps how she planned it all along.

One cosmetic surgeon said that Kylie is actually being smart about her face and body changes. She’s capitalizing on her beauty and hot look, if you haven’t observed that by now. Smart girl, indeed!