Skip to content
Home » Gordon Ramsay: Before and After 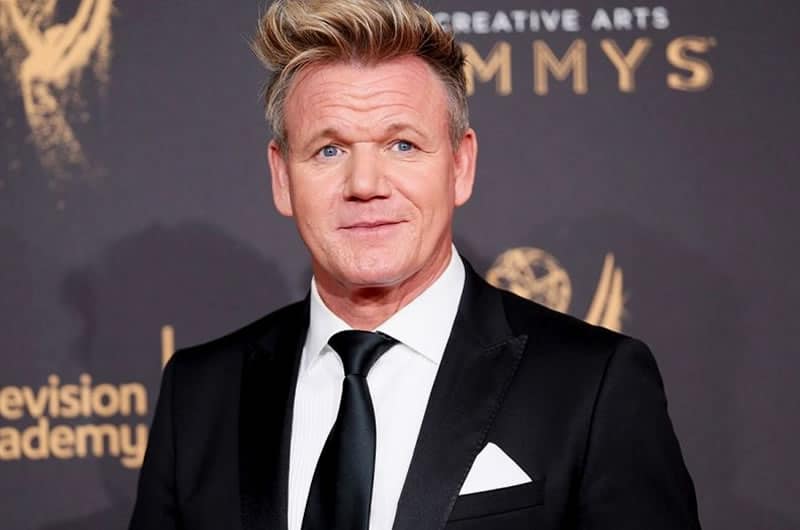 Gordon Ramsay has a reputation for having a fiery personality. So it wasn’t long before the public scrutinized his looks.

Every time he started shouting and swearing in the kitchen, people noticed his wrinkles.

But lately, Gordon is looking younger and I think plastic surgery could be the reason.

Did Gordon Ramsay have a facelift? 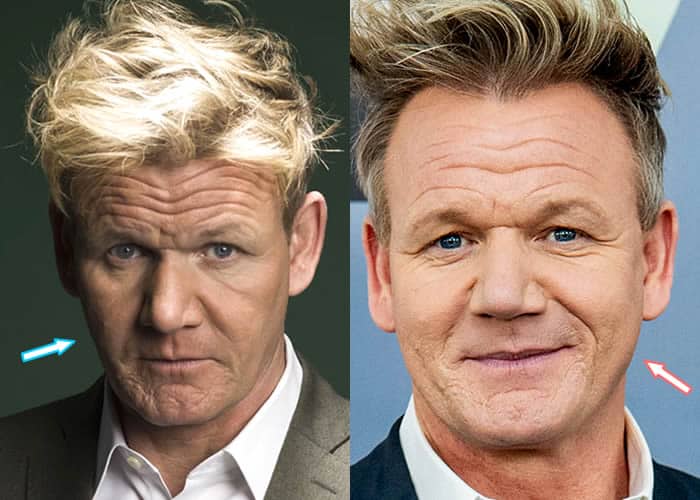 Maybe it’s his Scottish genes, but Gordon’s face is full of wrinkles, especially on his forehead and chin. They appear on all of his photos.

A few years later, however, those deep lines have been slowly disappearing, which led us to believe that Gordon might have had a facelift.

While the TV chef has only admitted to having laser wrinkle treatment and not a face surgery, I still find it a hard to believe.

Regardless, whatever procedure he got has definitely improved his appearance and softened his look. He looks more friendly, pleasant, and approachable.

Did Gordon get botox injections? 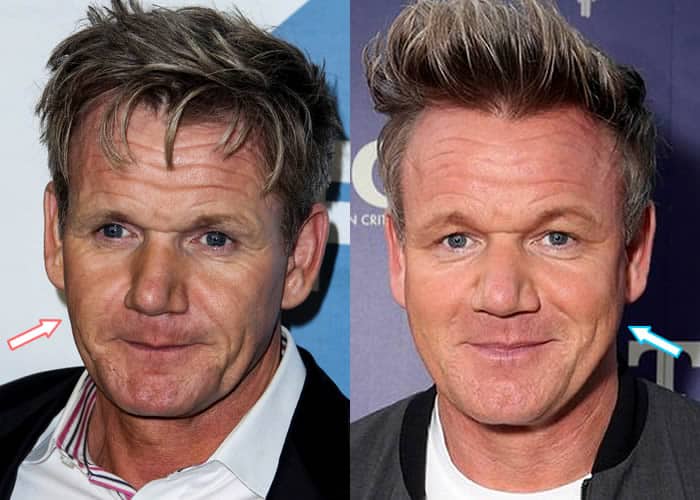 Based on the comparison photos above, there is little doubt that Gordon has turned to botox to reduce his wrinkles.

In fact, the chef himself has admitted it too.

I think the facial fillers has done him wonders though as they helped cover those deep lines around his forehead and face cheeks.

It made him look good.

Has Gordon had a hair transplant? 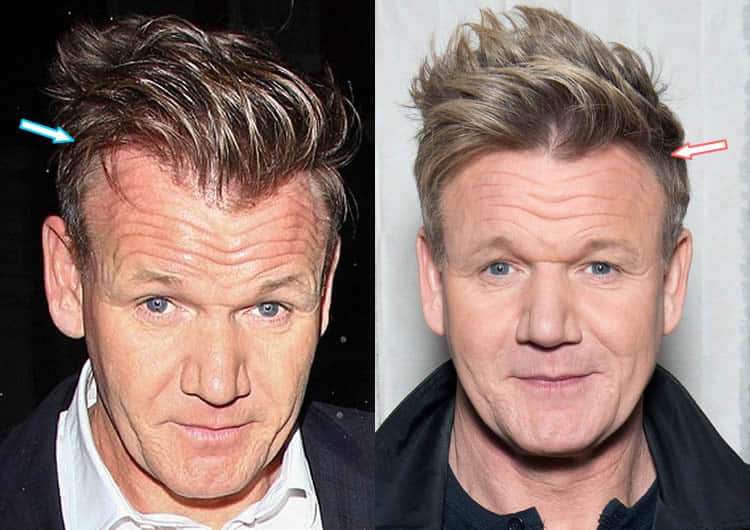 It is quite possible.

Gordon had a receding hairline problem, as evidenced in this before photo. Hair loss comes as no surprise too since his hot-tempered nature on TV likely brings him a lot of stress.

But something changed in his hair in recent times and it seems like Gordon has done something to correct those thinning patches.

I’m guessing a hair transplant and it is a job well done!

What happened to Ramsay’s chin scars? 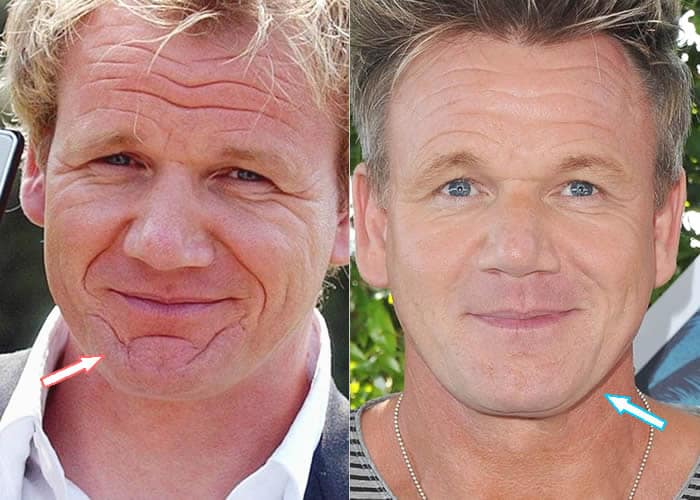 When he was still new on TV, Gordon’s chin had very deep lines.

Rumor says that those are chin scars which he got from playing Rugby during his youth.

Those lines have now disappeared so I’d say he had some work done to that area.

Young Gordon looked like he couldn’t hurt a fly in this photo.

Maybe he was about four years old here and he looked so cute with those big blue eyes and round face.

As a teen, Gordon was into football, fishing, and other sports.

He had lots of hair too.

As a happy and handsome young adult in the ’80s, Gordon got his education in the kitchen of Marco Pierre White.

The prominent chef and restaurant owner was known for his temperament and there were stories that he made Gordon cry.

When Gordon opened his first restaurant in the 90s, there were not many wrinkles on his face, except on his forehead.

At 38 years old, Gordon became a TV star. Though he still looks quite young, he had lines on his face that TV makeup couldn’t cover.

I’ve never noticed this before, but Gordon has big ears!

Gordon might be pushing himself too hard at work.

At 42, he looks older than his age and was losing hair too!

Besides running his million dollar empire, Ramsay likes to maintain a lifestyle balance of healthy food and exercise. Here, he joins his beautiful wife, Tana, at the Virgin London Marathon in England.

Besides all the procedures that we have discussed, I think he might have had a brow lift too. His forehead looks much smoother.

Apparently, Gordon is good friends with Simon Cowell and has been taking his advice in the anti-aging department. It shows, right?

I don’t think 55 year old Gordon would have too much to complain about that body.

He has done well to stay in shape.

What did Gordon say about his appearance?

Gordon Ramsay openly talked about the cosmetic work done on his face. He revealed that he sought the help of a plastic surgeon after his encounter with his children.

I’ve got four children, and they’d say: ‘Dad, why have you got so many wrinkles on your face when Clementine’s daddy has no wrinkles?’ The lines were pretty horrific, like Scarface, and I was never embarrassed by it but my children helped me become more paranoid about it.

He also discussed what Simon Cowell’s advice was about his appearance.

Simon Cowell suggested that now I’m a success in America, I should do something, so I had a filler put under the deep crevices. It hurt.

Makeup artists in Hollywood also suggested Gordon should get cosmetic enhancements. So, he had a laser wrinkle removal procedure.

It took four minutes each side, lasered not Botoxed. No one noticed until I mentioned it. When you don’t say anything you’re classified as a liar, so you can’t win.

Gordon, however, said that his doctor did not want to touch his forehead. That might completely change the essence of the celebrity chef people have come to know on television.

The “Masterchef” has been upfront about his cosmetic surgery and his photos showed.

For someone who is in a lot of TV shows, it makes perfect sense that he wants to find ways to look his best for his audience.

If he’s comfortable and is not overdoing it, why not?