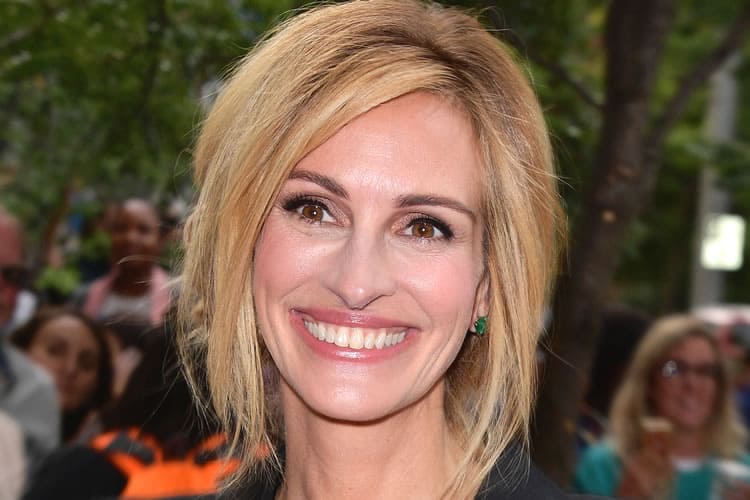 As one of the biggest movie stars on the planet, Julia Roberts has been named the World’s Most Beautiful Woman at least five times by People Magazine. The “Pretty Woman” star, who is also a mother of three kids, still has one of the most gorgeous faces in Hollywood.

But Julia has always claimed she’s never had cosmetic surgeries. She apparently prefers to age naturally and prides in the fact that her beauty is low maintenance.

If you’ve seen her recent movies and photos, then you’ve got to wonder about her skincare and beauty secrets because her looks have hardly changed. The “Notting Hill” actress seems to have kept the same face, nose, and lips in all those decades she’s appeared on the big screen.

Although we couldn’t say the same about her body, which you’ll see why below.

In terms of her facial features, we honestly cannot recall anything suspicious. Sometimes, you just know when a celebrity had something altered but there haven’t been such awkward moments with this particular superstar.

So, is Julia a natural beauty? Let’s find out!

It’s time to carefully scrutinize Julia’s appearance. Let’s figure out if she’s blessed with natural good looks or if she’s had help with plastic surgery to combat aging.

Did Julia Roberts have facelift? 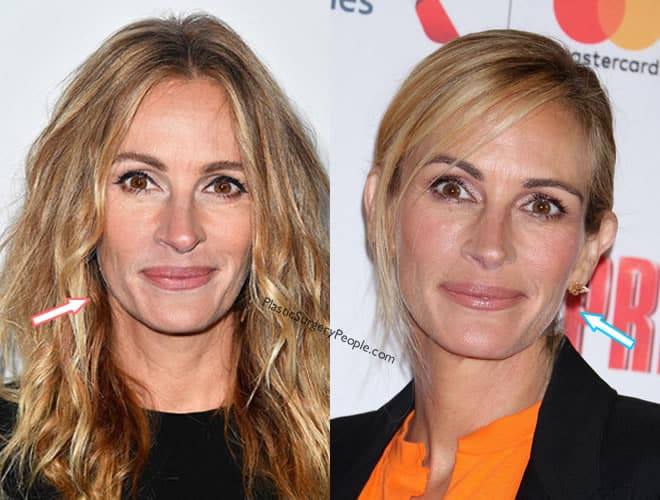 Getting a facelift is very common among Hollywood stars. Actors believe that having lines and wrinkles will spell the end of their career so a lot of them undergo a surgery to fix them.

But Julia’s face does not show any traces that she’s had an operation to hide her age. Her forehead remains smooth and her cheeks do not appear to sag even in her 50s. There are some fine lines visible, but it doesn’t look like she got a facelift or need one for that matter.

Did Julia get botox injections? 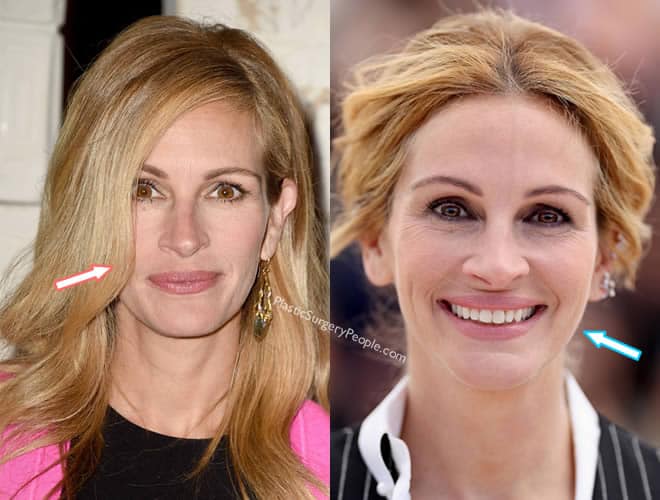 At one point during 2016, Julia looked a bit pudgy as shown in the top right image. If you compare that photo to the left, her face was slimmer before.

Thanks to this picture, fans speculated that she had botox injected to plump up the area around her cheekbones. But to her defense, we think it also possible that Julia simply gained a little weight so that her face appeared fuller. Her wider smile may have also contributed to this pudgier look. What do you think?

Has Julia had a nose job? 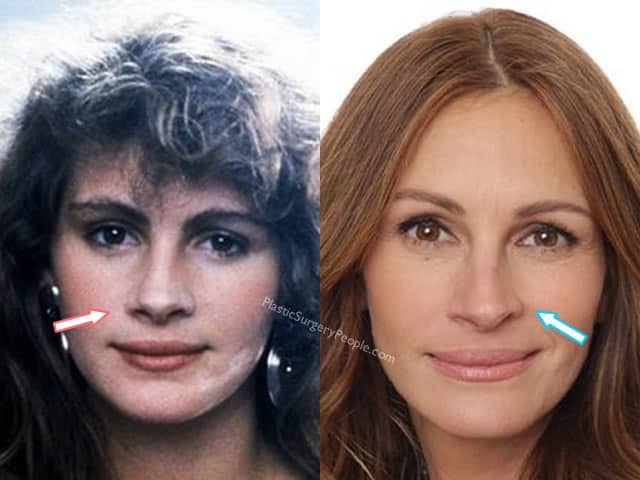 Like most stars, Julia has her fair share of nose surgery rumors. After studying many of her past and present pictures, it doesn’t look like she had a rhinoplasty to change the size and shape of her nose. There’s no apparent augmentation to her nasal bridge. The wing and tip of her nose also look the same, if not slightly imperfect.

Did Julia have breast implants? 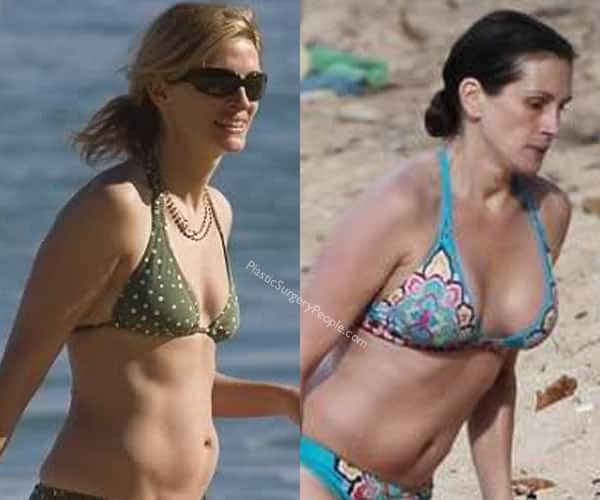 Julia’s boobs appeared to have gotten a boost in these before and after photos of her wearing a bikini. Some speculated she got silicone implants to pump up her breasts and cleavage. Others, however, think her chest only looks bigger because she has gained weight.

If she did put on weight, then why did the fat only enhance her bust size and not the rest of her body? We doubt that Julia wore a push-up bikini bra also so we’re inclined to think she might’ve had a boob job!

Does Julia have lip injections? 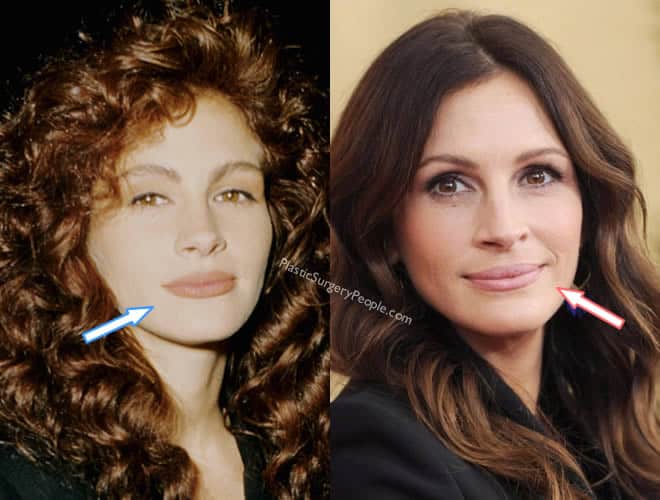 It’s a known fact that Julia has a large size mouth which makes her lips one of her most attractive features. However, based on the above comparison picture, we couldn’t see any signs of lip fillers use. Her lips are real.

What about Julia’s teeth? 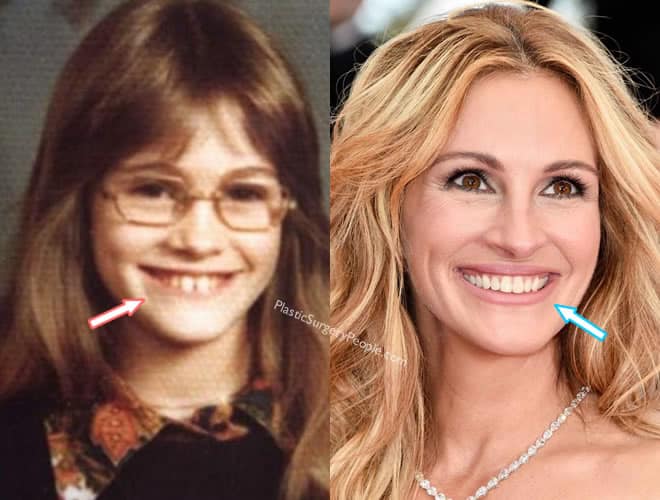 People always equate the perfect smile of Julia Roberts because of her teeth. But she didn’t always have the best set of pearly whites. In fact, Julia had a gap between her front tooth when she was young, as shown in this before photo. It looks like she got braces to fix this problem and we haven’t found any evidence of veneers used to cover up any other imperfections.

There’s an amusing anecdote that says Julia’s dentist in Georgia, Dr. Ted Aspes, gave away 10,000 tubes of toothpaste when the actress won her Oscar award for “Erin Brockovich.” It was a promise he made to his young patients if they would win something major in their life.

Ever wonder what Julia look like before she became famous? Let’s take a look at her pictures back then and now to see if there are any other inconsistencies in her beauty.

Julia in her childhood 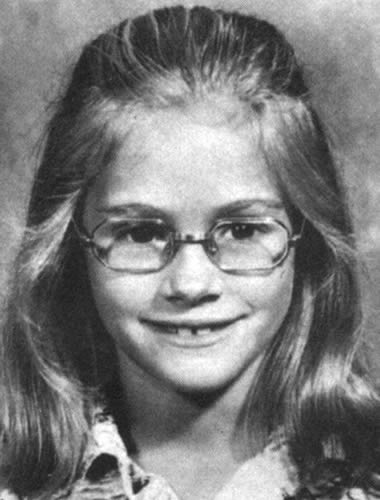 As a child, Julia looked really nerdy. She wore glasses that hid her beautiful eyes and she had a big gap on her front teeth.

Julia as a teenager 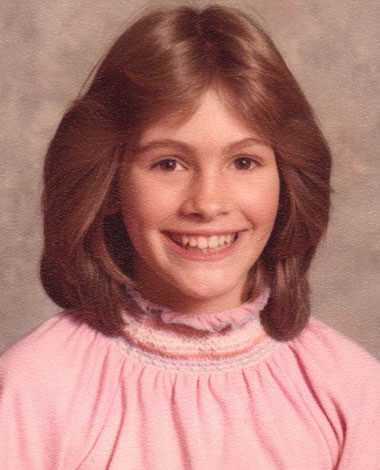 Julia blossomed into a beauty during her teen. She grew out of her braces and shed the baby fat. She also didn’t wear her nerdy glasses anymore and revealed her perfectly-shaped eyes with beautiful double eyelids. Her short and wavy hairstyle emphasized her face shape well and her nose is slowly changing from the one she’s had since birth. 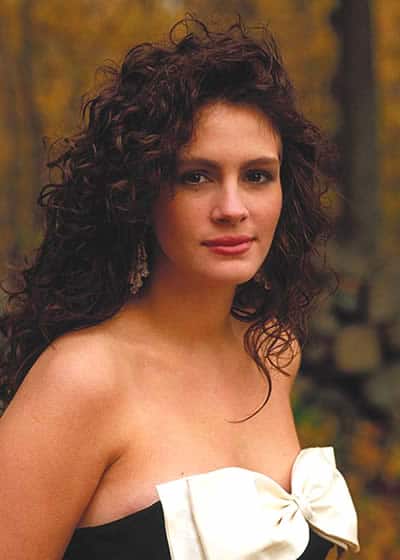 Julia was 21 years old when she made her debut on the big screen in the movie “Satisfaction.” She has transformed into a beautiful young woman that men would go crazy over with long curly hair and a gorgeous face. This cleavage-baring gown she wore in this picture suggests that breast size wasn’t big during her early adulthood. 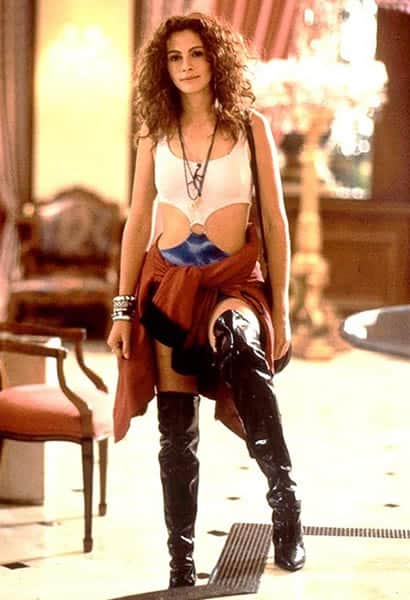 Julia struck gold when she starred in the box office hit “Pretty Woman” opposite Richard Gere. This iconic look, where she wore thigh-high leather boots to show off her long legs and a short dress that exposed much of her waistline and sexy body, will never be forgotten by movie lovers everywhere. 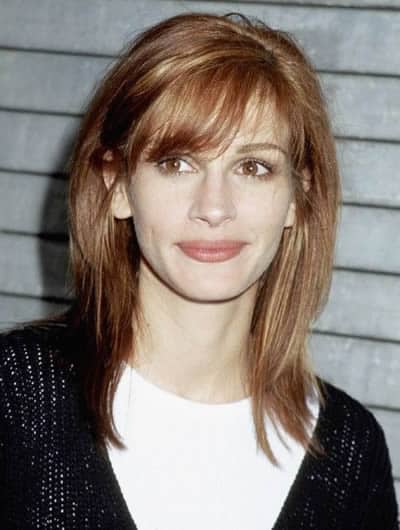 This was the year Julia got divorced from country crooner Lyle Lovett. She still looked awesome with minimal makeup and her lips always had a healthy red color. The star wore a Rachel haircut, which was a trend at that time. It emphasized her jawline and chin. Nothing unnatural about her face here. 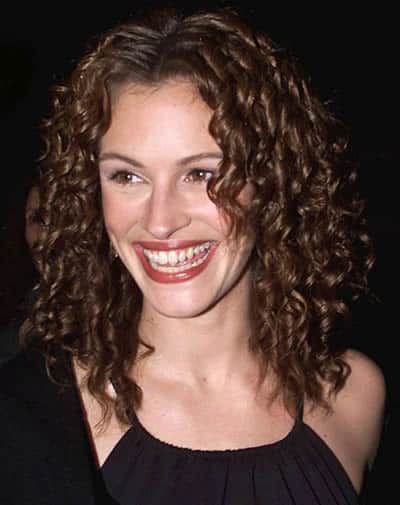 The American actress had every reason to show up in public with the biggest smile because this was the year she became a certified Hollywood powerhouse as one of the 50 most influential women. We love this look with her dark corkscrew curls, minimalistic eyeshadows and red lipstick that emphasized her mouth size. 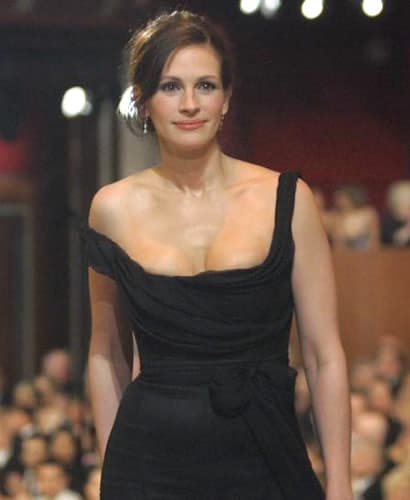 Julia gained size after she gave birth to twins Hazel and Henry with new husband Danny Moder. People speculated she had a breast augmentation because her boobs looked fuller. However, she was still a knockout in this black dress she wore for the Oscars even if her body had changed a bit due to the pregnancy. 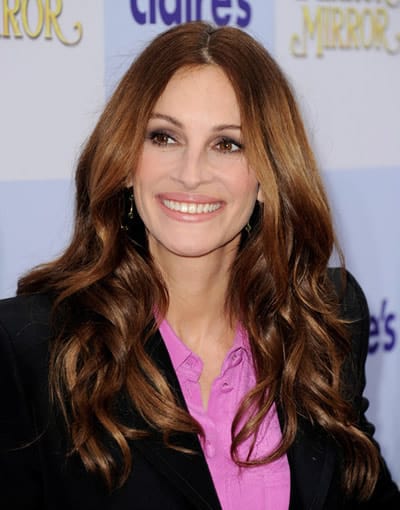 Now at 45 years old, Julia shows signs of aging on her skin. But the presence of wrinkles still does not diminish her beauty. Julia dyed her hair dark brown and wore it with long curls in this photo. She looked so fresh and youthful with the right combination of makeup — smokey eyes and nude lipstick.

There are now prominent lines and crows feet around Julia’s eye area as her face ages. It also seems as though there’s something different about her smile in this photo from her Cannes Film Festival appearance. She has plumper cheeks that may hint of a botox treatment. 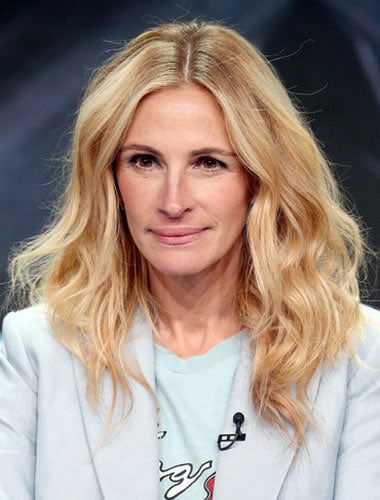 Now 51 years of age, Julia embraces the aging on her skin without hesitation. She still proclaims she doesn’t need a face lift but instead uses skincare products to keep her youthful glow. She changed to blonde hair while promoting her latest project, a TV show called “Homecoming” for Amazon Studios.

What did Julia say about plastic surgery?

Julia told The Telegraph she took a career risk because she hasn’t had plastic surgeries to hide the flaws on her face.

“By Hollywood standards, I guess I’ve already taken a big risk in not having had a facelift, but I’ve told Lancome that I want to be an aging model – so they have to keep me for at least five more years until I’m over 50.”

She also shared the reason why she’s refusing botox in an Elle Magazine interview:

“It’s unfortunate that we live in such a panicked, dysmorphic society where women don’t even give themselves a chance to see what they’ll look like as older persons. I want to have some idea of what I’ll look like before I start cleaning the slates. I want my kids to know when I’m pissed, when I’m happy, and when I’m confounded. Your face tells a story… and it shouldn’t be a story about your drive to the doctor’s office.”