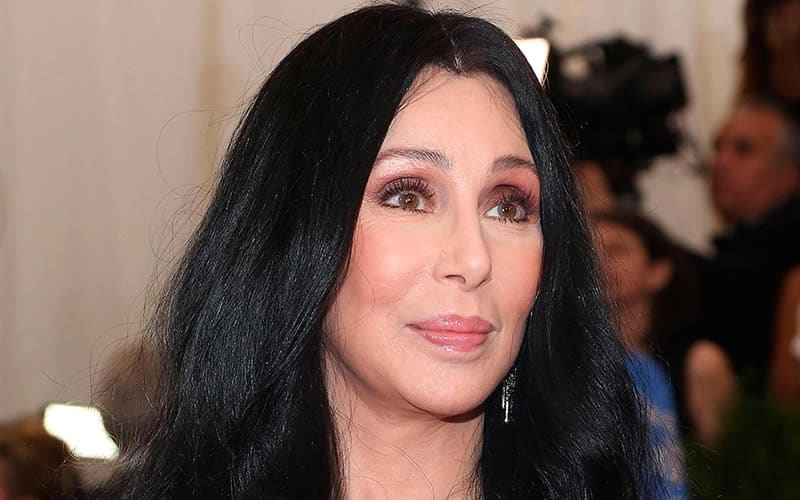 American singer and actress Cher gained popularity in the 1960s as a part of the folk-rock duo Sonny & Cher with her husband Sonny Bono. They created the hit “I Got You Babe” that sealed their place as the “It” couple of rock music.

A few years later, Cher would embark on a solo career following her divorce from her husband. With her beautiful voice and talent, the unique features of her face, and her shapely body, Cher also transitioned into television, movies, and theaters such as “The Witches of Eastwick, “Mermaids” and “Mama Mia! Here We Go Again.”

The star whom Forbes declared was the “world’s most famous chanteuse” has become the celebrity icon for female empowerment. She stood out in the world of rock, an industry that men dominated.

But by the 1980s, Cher has been plagued with controversies about the men in her life, her fashion sense and plastic surgery. Rumors suggested that Cher has frequented a cosmetic surgeon for her botox and facelift. People also speculated that she had procedures done on her boobs, nose, and eyes.

Let’s face it, Cher is no longer a spring chicken but she doesn’t look like someone in her ’70s either. The award-winning singer can still keep up with younger women when it comes to looks and beauty.

There are no anti-aging secrets to Cher’s gorgeous and youthful appearance. Over the years, it has been pretty obvious she’s had cosmetic surgery to turn back the clock. Let’s look at some photos before and after she became famous to see the extent of her procedures.

Has Cher Had a Facelift? 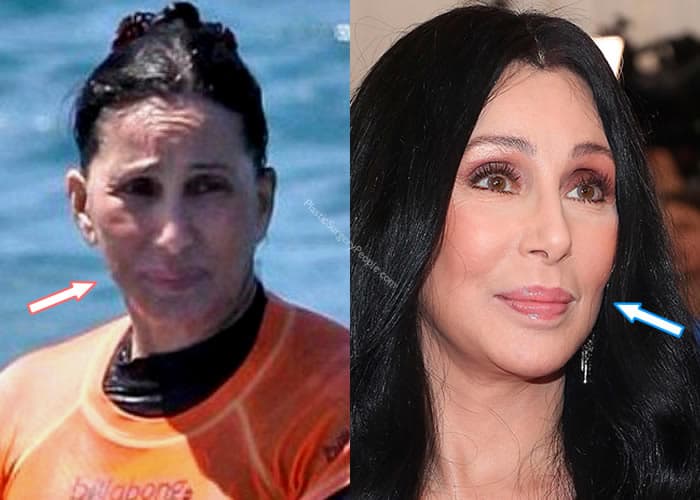 The superstar’s face wasn’t completely free of wrinkles back then. She had visible lines on her forehead, eyes and mouth when she’s not all made up, as seen in this before photo.

But come red carpet time at Hollywood events, Cher’s face looks flawless for the cameras. It’s likely she prepared to be in front of photographers by having a facelift and possibly a brow lift. In this after photo, it seems she even had a tape on the back of her neck to hide the signs of aging because her neck is so smooth.

Did Cher Have Botox Fillers? 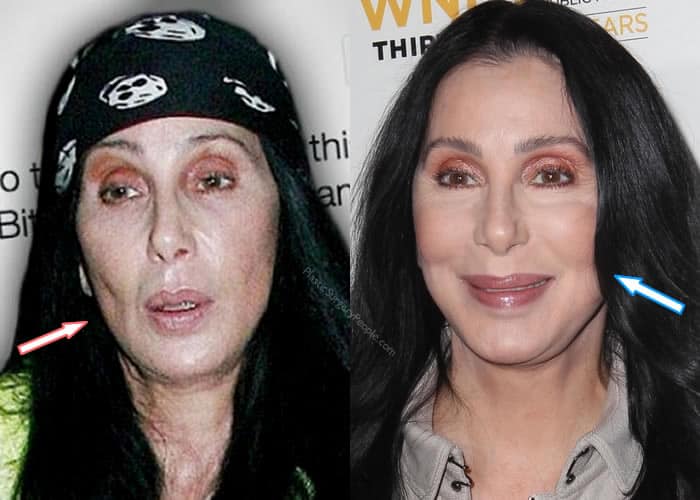 The puffy cheeks in this after photo suggest that Cher may have gotten facial fillers to plump away her wrinkles. The difference in the volume in her cheek area is so noticeable if you compare it to the before shot. Her smooth and flawless skin, coupled with that awkward smile, suggests that botox has been used by the gorgeous songstress. 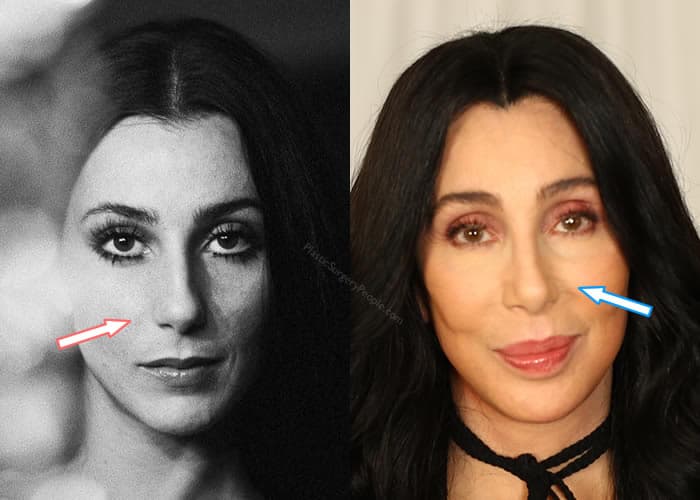 Rumors claim that Cher’s nose had a subtle transformation over the years. But if you look closely at these before and after pictures, the nose shape, the bridge bone and the slightly misaligned tip look the same. So, we don’t believe she’s had a nose job despite what other stories say.

Does Cher Have Breast Implants? 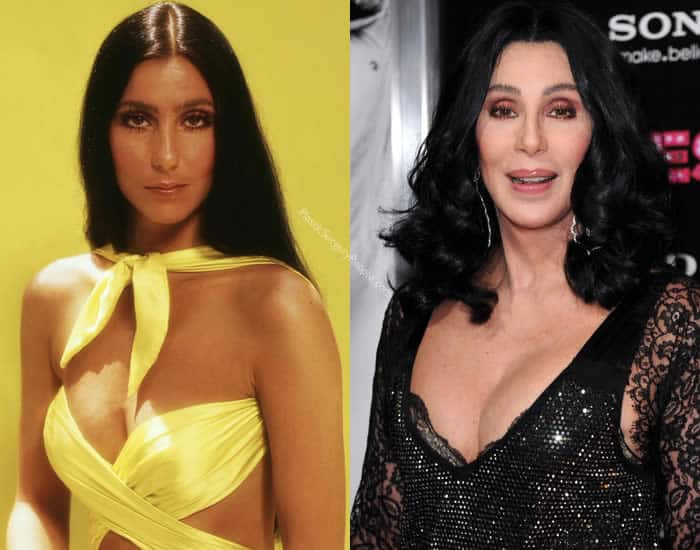 Talks that Cher had implants to slightly increase her cup size also surfaced over the years. From our side of the fence, it looks like she might’ve had a breast lift indeed. For her age, Cher’s breasts show no signs of a sagged boob, which could only mean one thing: she had a boob job to give them a lift, but not silicones as they appear natural. 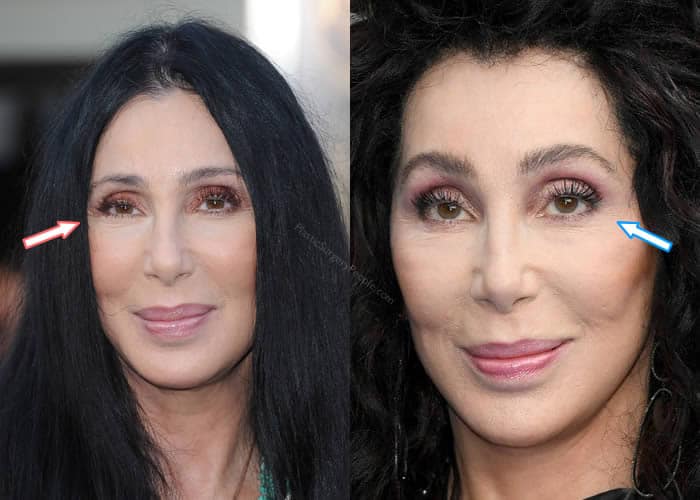 Cher has a pair of the prettiest eyes in Hollywood, thanks to her genetics. But it appears she may have resorted to an eyelift procedures to hide the signs of aging. Looking closely at the eye area in her before photo, you could see her eyelids sinking a little. Compare that to the after pic, her eyes look sharper and her eyebrows seems to have been lifted.

Nevertheless, we love the natural and uneven eyebrows here, unlike the plastered look that’s on trend these days.

Let’s see how Cher’s look has changed over the years. By comparing her pictures back then and now, we should be able to find out if other cosmetic surgeries have taken place. 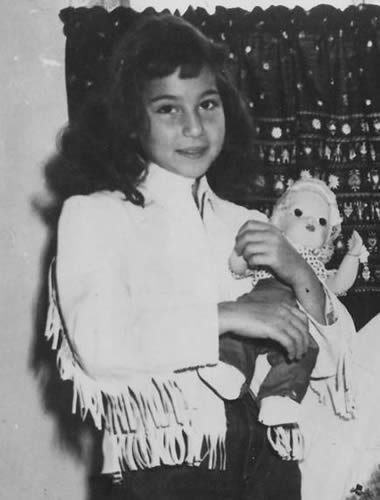 As a young child, Cherilyn (her real name) had an angelic pretty face. Her eyes gazing directly at the camera look as big as the eyes of her doll. She had a pear face shape and a pointy chin, which matches the star’s facial features we see today. 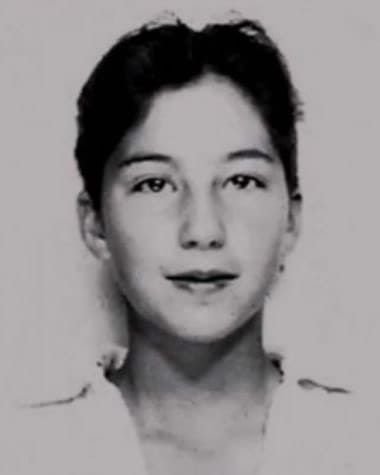 Would you believe that this is Cher’s mugshot? She apparently got into trouble as a teen.

Even though it wasn’t her mother’s intention for releasing this shot, but this photo had fans wondering if she had rhinoplasty due to her thick nose and wider nasal bridge. Since she’s still growing as a young teenager, so we’ll give her the benefit of a doubt for now.

Another area that was quite visible were her double eyelids, so at least we know she definitely didn’t need an eye surgery for aesthetic purpose. 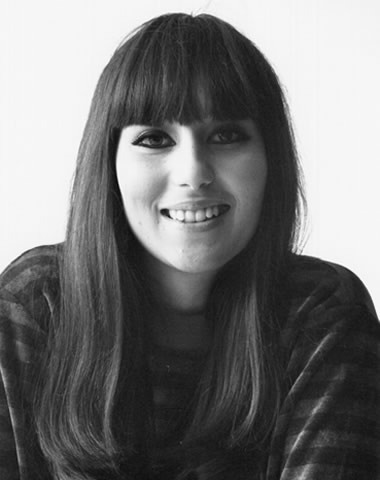 A pretty woman at 19 years old, Cher took full advantage of her rounded big eyes through makeup. She also displayed the perfect nose shape and beautiful lips. Her beauty, aside from her unique singing voice as a woman with low voice register, captivated people to take notice of her rise to superstardom. 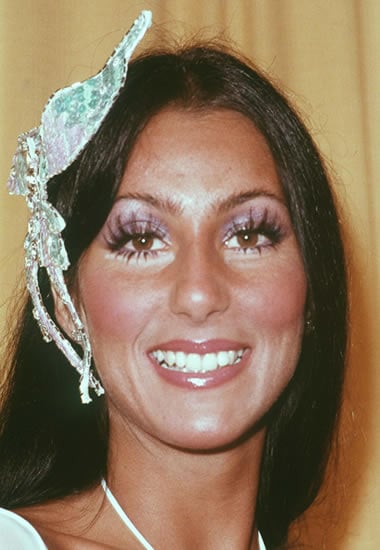 The gorgeous singer has early on shown her unusual sense of style and fashion. She would don fake and long eyelashes, apply bright eyeshadows and wear quirky hair accessories and still look confident on stage.

She has no signs of dental veneers or braces at all and we actually like the minor imperfections to her teeth. At this point, the laugh lines around her mouth are starting to show. 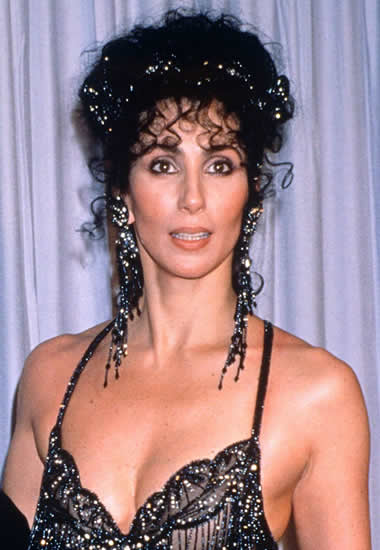 Now starring in movies while also doing concerts in Las Vegas, Cher has become a bankable celebrity. She also embraced a curly hair this time, when she’s known for her silky straight locks.

Her nose looks thinner in this photo, leading some to allude she had her nose worked on. People also started talking about her other procedures because plastic surgery technology in the ’80s improved. In this photo, Cher also seemed to have lost weight but given how much she dances on stage, we’re not surprised. 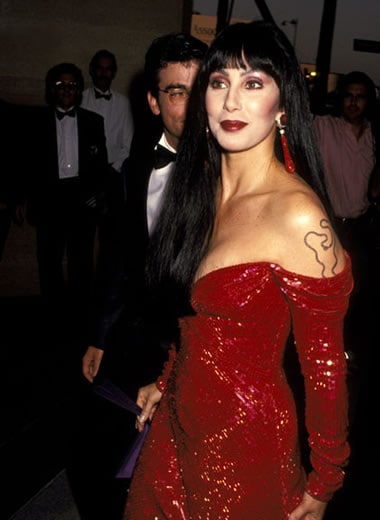 At 44 years old, Cher walked the red carpet showing off an interesting tattoo on her shoulder. She was to receive the award as the Favorite All-Around Female in Hollywood during this time. She looked very attractive in her body-hugging red sequined dress.

You might wonder if Cher has a wig on for this look but we know that this is her real hair. It’s actually one of her best assets. 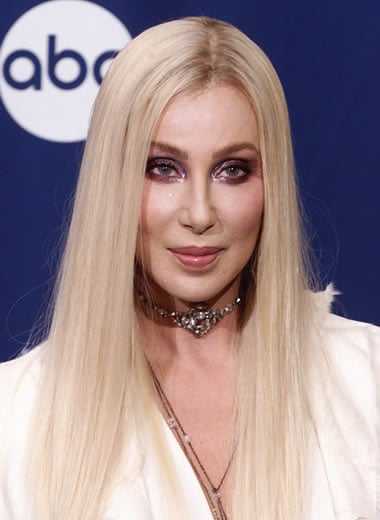 Cher reinvented her look and dyed her dark long hair blonde following the release of her 23rd album “Not Commercial.” Her face had no wrinkles and lines at all in her ’50s. Does she have a great skin care routine and use very effective cosmetics on her face? This led to more talks about her having a facelift and some fans even suggested that she’s wearing that necklace to seemingly hide traces of the procedure. 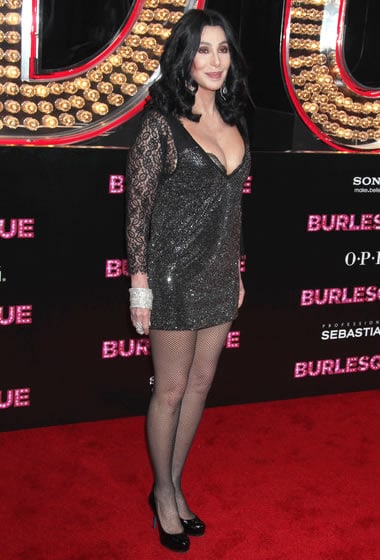 The Mama Mia singer graced the red carpet of “Burlesque” with a curvaceous body shape and a head-turning cleavage. She credited a routine workout and a healthy diet to looking so fit in her late 60s but it has also been speculated that she had liposuction for that perfect body shape and breast augmentation for her firm bust size. 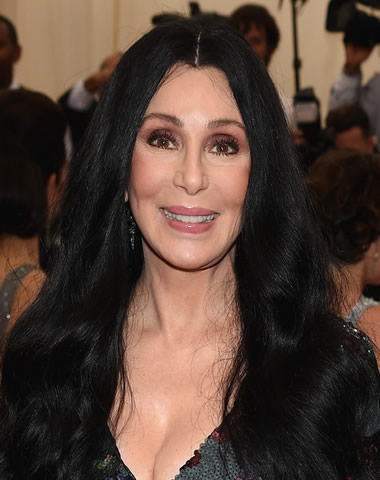 Everyone can’t help but talk about Cher’s flawless face when she went to the MET Gala. She looks so stunning at 69 years old and hardly had any lines on her neck. If she had indeed gotten a neck lift and a face job, then we can only say that her plastic surgeon did wonders. 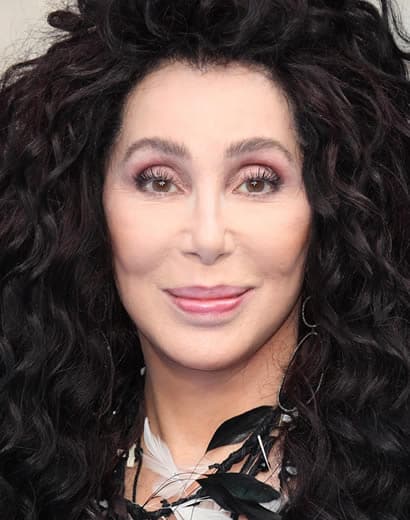 Gracefully aging at 72, Cher really can’t complain about her appearance. Here she attends the red carpet for “Mama Mia Here We Go Again” in London and you can see some traces of wrinkles around her eyes. Despite some signs of botox use on her cheeks, we still think she looks amazing for her age.

What Did Cher Say About Plastic Surgery?

Cher has admitted in several interviews to having cosmetic surgery procedures.

“I have had a facelift, but who hasn’t? I have become the plastic surgery poster girl.”

It’s not something she’s ashamed of but she also credits her clean lifestyle for her beauty.

“I didn’t smoke, I didn’t drink, I didn’t do drugs. And I think that has something to do with it.”

She also admitted over 10 years ago that she had work done to look good on stage or the screen.

I really want to be able to get up there in my size 27 jeans and dance around the stage and look good, you know? I’m trying to keep the package viable.

However, she denied that she has done implants. Even if she did, she said it’s her private business.

“If I’d had as much plastic surgery as they [say], you know, like I’ve got ass implants and calf implants and cheek implants. I’ve had the same cheeks my entire life. No butt lifts. No ribs removed.”

No doubt, Cher’s numerous plastic surgeries have given her a youthful look as she aged. The beautiful star admitted she had a facelift procedure like many celebrities in Hollywood.

Although she has not elaborated on the other augmentations to her face and body, it’s possible that she may have had a neck lift and an eye lift. It’s also obvious that she might’ve gotten facial fillers as sometimes her face appears slightly puffy. Regardless, she’s pretty forthright about getting help from plastic surgeons for her career as a music icon and inspiration.

For someone who has an amazing career that spans nearly six decades and a number of hit songs under her belt, Cher seems to have made the right decision by investing in her appearance. The reality is, in her line of work, talent and good looks often go hand-in-hand.

Did Catherine Bell Have Plastic Surgery?

Lana Del Rey: Before and After

Need A Breast Lift? You can ask a vampire to help…

Did Britney Spears Have Cosmetic Surgery?