Skip to content
Home » Halle Berry: Before and After 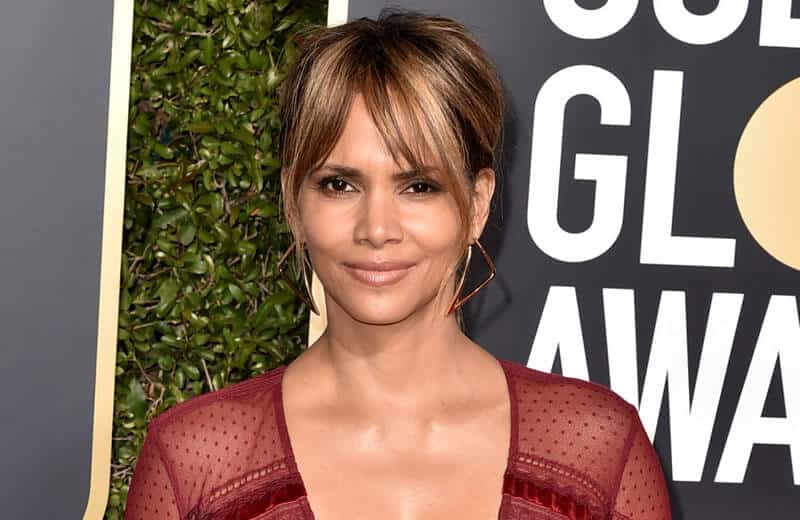 Before Halle Berry became a Hollywood star, she was a model and an international pageant queen.

In fact, she was the first-runner-up at a Miss USA beauty contest and has also landed in the Top 6 of Miss World in 1986.

Halle stood out not only because of her talent but also because of her mixed looks as a daughter of an African-American dad and an English-German mom.

Now in her 50s, aging seems to be kind to Halle. However, she has confessed in many interviews that she feels pressure to look in Hollywood. Someone is always telling her to get plastic surgery too.

I’ll say it beforehand — this actress is very lucky to have good genes. However, I have some evidence that may suggest a little more than that.

Has Halle had a nose job? 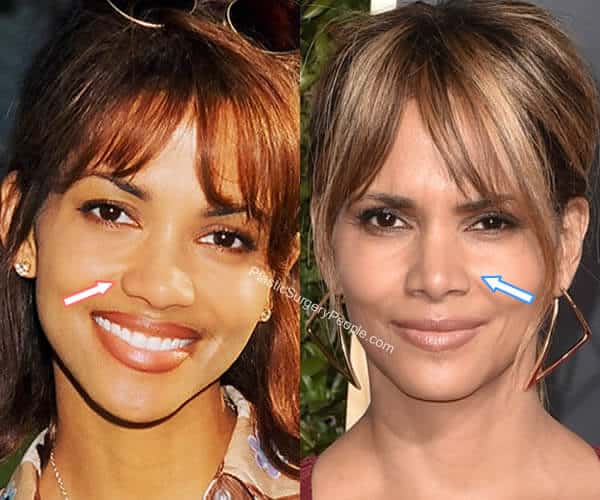 Well, well, well…it does look like Halle might have had her nose done! It’s a subtle change but you can definitely see how refined her nose looks in the “after” photo. Her nose bridge is higher, thinner, and the tip looks more prominent too.

If this is true, then I can’t blame her because she worked as a model at a young age. A flawless face is an investment in this business. Whether this is a nose job or just makeup, I still think it looks great!

Did Halle get breast implants? 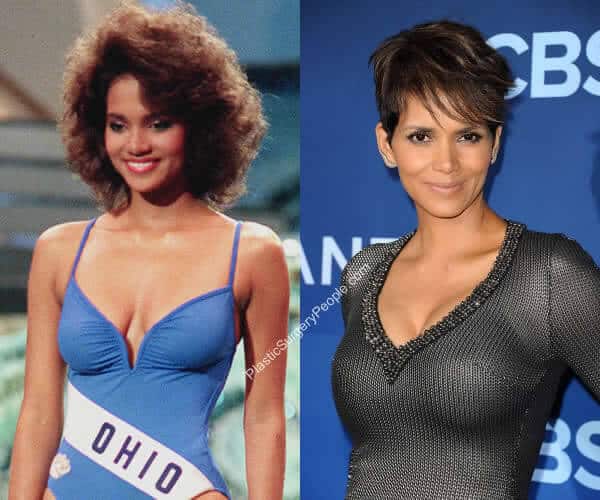 There were rumors saying Halle spends tons of dollars on her boobs every year. I think “every year” is an exaggeration but I think she might have gotten her breast enhanced with implants.

She was not flat-chested by any means but her “after” picture clearly shows a much rounder and bigger breast size. The changes can be easily spotted around her cleavage area which was further apart.

Now, I’m not 100% sure if her possible boob job was to increase its size or firmness. I’m suspecting both.

Did Halle Berry have botox? 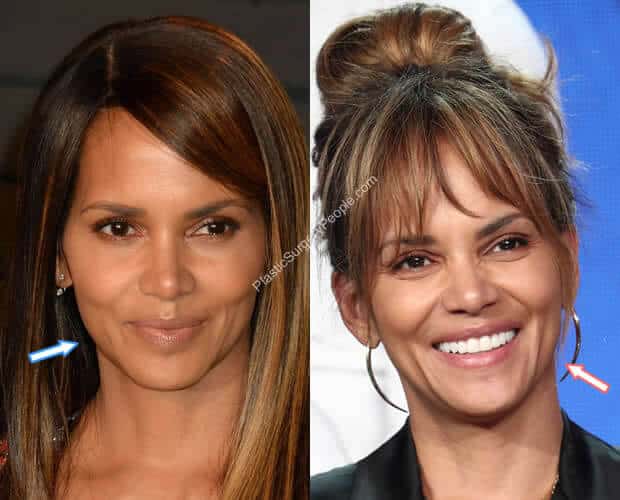 The actress is blessed with good skin that I envy so much.

She is in her 50s and unless she is smiling, you can hardly see any wrinkles on her face. She looks great but not ageless so I don’t think she’s been getting botox injections. Those laugh lines are quite visible and I think the aging is showing around her eyes too.

Her face also has an effortless and natural expression, which sometimes fillers prevents. 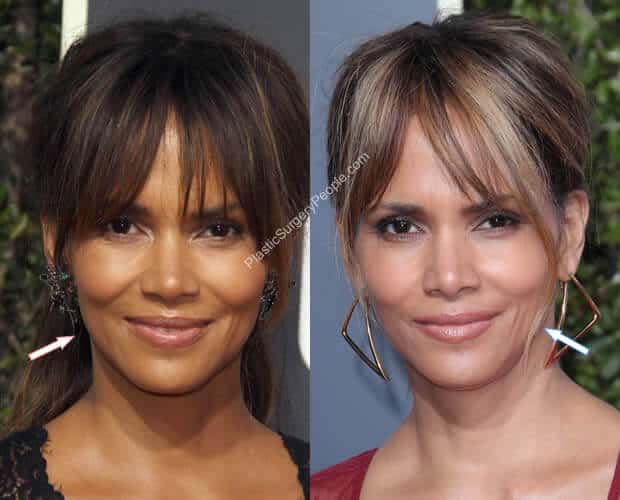 I doubt Halle had a facelift.

Again, those smile lines are showing on her face. They appear in the same spot in both pictures. Those would’ve disappeared or faded if she did have this procedure. 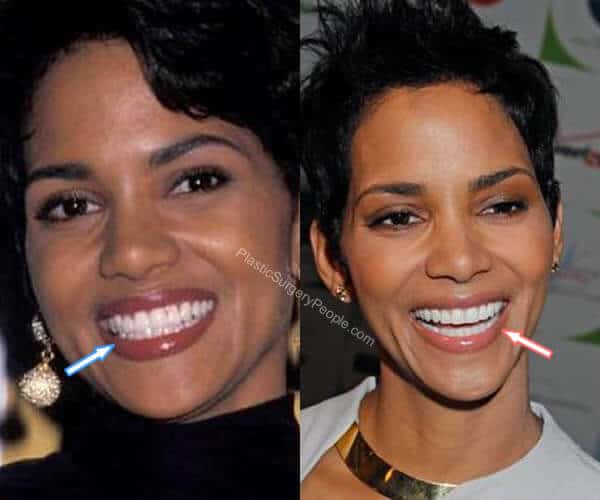 Her smile is one of her beauty trademarks. Halle’s teeth are famously white, bright, and perfectly aligned, which is another cause for envy. Why do the beauty gods love you so much, Halle Berry?

I also think her mother ensured that Halle took good care of her teeth when she was still a child. You gotta start them early!

Halle Berry: Then and Now

Let’s take a look at Halle’s transformation over the years from a young innocent girl to the beautiful woman she is today.

For me, Halle Berry was already a looker even as a young child. She is one pretty little kid with big round eyes. She did have a small gap on her teeth though, so I think she may have gotten braces when she was young.

She couldn’t have looked more “trendy ’80s” in this photo with the big hair and the quirky printed blouse (I can bet that’s a crop top!). But her alluring pretty eyes draw all the attention for me. Although, I can’t also help but notice she had a chubbier and wider face as a teenager.

Say hi to Miss USA at the beauty pageant!

It’s not hard to see why Halle would be known for her beauty — with her whistle-bait figure, beautiful smile, glistening skin, and gorgeous eyes. A perfect 10!

Halle embarked on a movie career wearing a chic haircut. She was introduced in Spike Lee’s “Jungle Fever” with this cute hairstyle, which was nothing like the Hollywood standard hair — long, wavy, and blonde.

I think this cut made her face look unforgettable.

I don’t about you, but Halle looks very different here.

While the shorter hair suited her perfectly, that nose definitely made her look sexier. You can easily see why so many people believe she had her nose done.

Besides that, I think the subtle eye makeup enhanced her best features and I believe she had her brows trimmed, too.

Playing the James Bond girl did wonders for Halle’s career.

This photo of her wearing a tiny tangerine bikini (which complimented her skin, by the way!) turned her into an iconic sexy figure in showbiz. What a body!

People have been used to Halle wearing her hair short for over a decade. I think she reinvented her appearance here by going long hair this time.

And you know what? She still looks stunning!

I think we can all agree that Halle Berry has an ageless body.

Despite having two kids, she has managed to maintain a slim body all these years. We all know that she works out but I just can’t help but wonder if she’s had some assistance on her tummy, like say…liposuction?

While Halle looks beautiful here, I can’t say that her appearance hasn’t changed. You can easily spot the crow’s feet around her eyes and the wrinkles on her cheeks.

It doesn’t look like she has done anything about them.

Looks like that the actress is focusing on her fitness program, Fiton, this year. She looks incredible and I believe it’s all thanks to her workout.

If you ask me, I think the most likely cosmetic surgery that Halle Berry has undergone is her nose. It looks quite different and she may have gotten it at a young age.

I also thought she had breast implants at one stage, but after going through some of her recent photos, I’m taking that back.

Apart from that, I believe she is choosing to age gracefully.