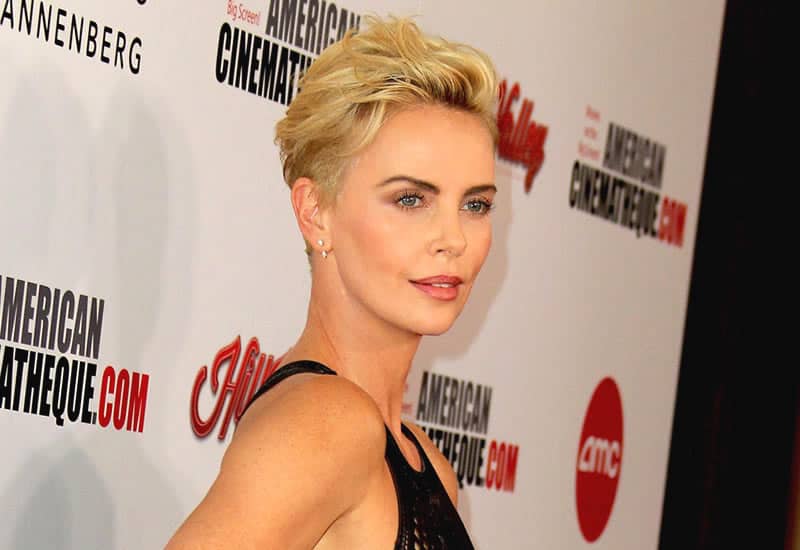 Those who have seen Charlize Theron over the years would notice how different she looks compared to before. Perhaps some plastic surgery work has worn off or she’s simply a natural woman who is starting to age gracefully.

Whatever the case may be…we’re about to find out!

Being a successful celebrity with a gorgeous face and a tip-top body, Charlize is no stranger to criticisms. Whether it is her new hair, makeup or the dress she wears at an event, the list just goes on.

But what interests us the most about this South African beauty is whether she’s had any cosmetic procedures done.

Like…did she have a nose job, eyelid surgery, or facelift? Were her eyes, nose, and overall face shape always so perfect?

To get the answers, we’ll go through some of her photos before and after she became famous and see if we can spot any evidence.

This was Charlize in her early high school years. Although she had glasses on, you can see that her facial features were quite similar to how she is now. She had a pointy chin, a high forehead, similar eye shape, but her nose does seem a little rounder and the tip looks wider compared to now.

At 16 years old, Miss Theron began her modeling career and won a local modeling competition in Salerno. Here she was posing for a photograph in a flower pattern shirt and blue jeans. Without the glasses, her nose seems more narrow so it seems that she may not need a nose job after all.

Here she was posing in a black swimwear with a star necklace for her model photographer. Even though this swimsuit wasn’t very revealing, you can tell that she didn’t have a very big chest.

Charlize moved to America when she was about 18 years old.

Here she was modeling for the German Madame magazine dressed up as Marilyn Monroe (and she looks like her too!). You can clearly see why they chose her as their model.

Although there are notable differences between Marilyn and Charlize’s bust size, this is perhaps the proof to show that she’s never had a breast augmentation since becoming an adult.

This is her at 21 years of age while attending a film premiere in LA. She’s got such beautiful jawline and adorable cheekbones.

The actress wowed everyone at the Vanity Fair Oscar party when she wore this elegant orange dress that greatly showed off her curves.

You can see how beautiful Charlize’s back is and she has a nice bottom to match it too. The fact that she has long legs and a slender body, we doubt she’ll want any butt injections

Here, we see Charlize smiling at the 58th Annual Golden Globe Awards. I dare say she has one of the most beautiful cheeks in Hollywood. Just look how full they are, it’s almost like she had Botox, right?

Ever want to see Charlize Theron with no makeup? Well here is your chance and you can watch all you like for the whole duration of the “Monster” film. It’s shocking how different she looks without eyebrows, eyelashes, and eyeliners.

Here’s a close-up shot of her natural skin. Apparently, she does have a lot of freckles on her face. I wonder if she’ll ever consider laser freckle or pigmentation removal treatment?

Just kidding! Those were airbrush makeup effects. (Got ya!)

Here she attends the 76th Annual Academy Awards at the Kodak Theatre in Highland, Hollywood. Wearing a glittering Gucci gown, it looks like the actress might have gotten herself a tan. Although we’re not sure whether it was spray or sun tan.

Also, if you look at her nose this year, her nasal bridge appears to be thinner and her nose tip near the nostrils also seems narrower. We’re not 100% certain whether it was makeup or if Charlize had indeed undergone a rhinoplasty surgery.

Wait..what? This blonde beauty changed her hair color to a full black thanks to her movie, Aeon Flux. It really matches her pink lipstick and blue earrings though.

In saying that, her lips look very pretty and full so no need for fillers at this point.

Fast forward a few years, we see Charlize at the 2009 World Football Challenge match between Chelsea FC and Inter Milan. Wearing minimal powder, you can easily see the fine lines and wrinkles around her eyes.

At age 36, Charlize Theron easily walks onto the red carpet like a hot babe. Although we can see a little weight gain from her arms and shoulders. Otherwise, she is stunning!

The star was spotted enjoying the sun at the Miami Beach wearing a rainbow strip bikini. Now, this is proof that she did not have a boob job. 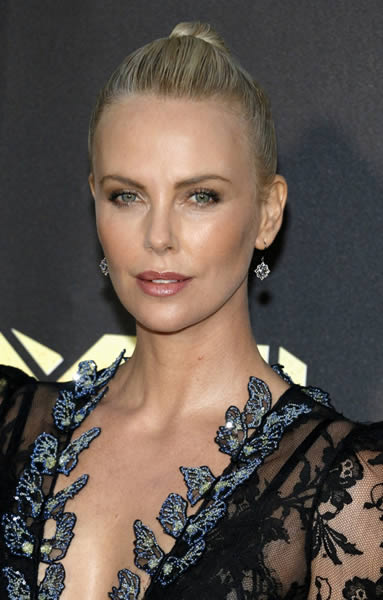 Something isn’t quite right with her forehead and eyebrows here.

Did she have a face lift or a browlift? You can see how close and narrow her brows have become. What do you think?

I can’t believe how incredible Charlize looks in 2020 when she rocked up at the 26th Annual Screen Actors Guild Awards. At 44 years of age, you can hardly see any flaws. WOW!

What did Charlize say about plastic surgery?

Back in 2012, ths South African beauty told Interview Magazine about the challenges she’s facing when it comes to her physical appearance.

I look in the mirror and my face is changing, and I have a different relationship all of sudden with myself. Your face changes, things change – that’s just kind of what happens.

At the time, she was only taking things one day at a time.

I can’t foresee myself ever going under the knife, but then again, I’m only in my mid-thirties. Maybe it’s different when you’re in your mid-sixties.

Although she wasn’t interested in cosmetic surgeries at the time, she hasn’t outright rejected it either…

I don’t know…..so I don’t want to make statements about where I’m gonna be in 30 years. But as of right now, I have a different relationship with the way I look.

After going through her photos on a year to year basis, we found some subtle evidence to suggest that Charlize may have had some procedures done. Most notably on her nose, face cheek, forehead, but especially eyebrow area towards the year 2016.

The evidence, however, isn’t strong enough and her face change could simply be a case of aging. I must admit she looks amazing though in 2019 and 2020. So, if she is all-natural then whatever skincare she’s using….I want some too!