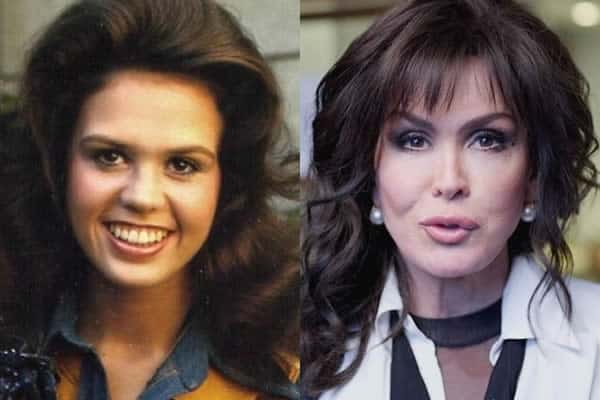 If you’ve watched bulky television and listened to music cassette tapes from the early 70s, you’d definitely know Marie Osmond. She is a successful celebrity not only because of her singing talents, but also her beautiful looks.

People just couldn’t get enough of her voice, face, and her incredible body.

That’s why speculations have been circling around as to whether Marie has had any plastic surgeries during any stage of her career.

To find evidence that will help us prove or debunk some of these rumors, it’s always best to compare how she looks over the years. 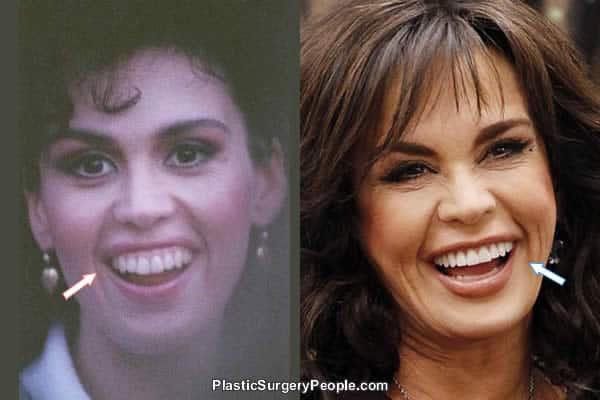 When Marie smiles, her upper teeth and gum clearly shows. If you compare it to her more recent photos, her smile has completely changed. This indicates that she might’ve had a gum contouring or reduction surgery. I wouldn’t be surprised if she’s had braces too.

Whoever was her dental surgeon at the time has done a very good job because her smile looks very pretty afterward.

Has Marie Had Breast Implants?? 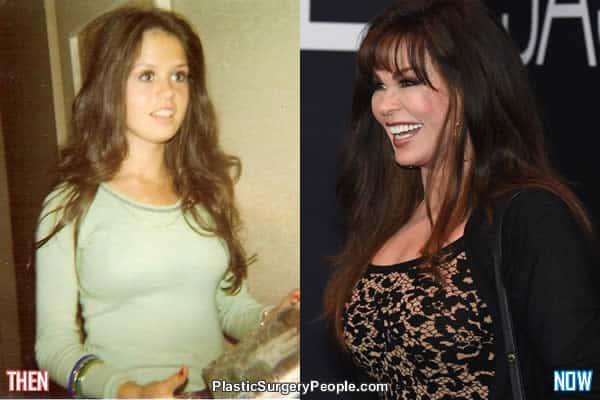 On the top left, you’ll see a photo of Marie when she was young. This would have been taken before her body was matured and fully developed. You can clearly see that she already had large breasts at her youth.

Although her boobs appear to be even bigger on the right photo, but remember she wasn’t fully developed yet, so there was still room for growth. This is good enough for us to reject the fact that she might have had a boob job during her career. Honestly, why would she need it? 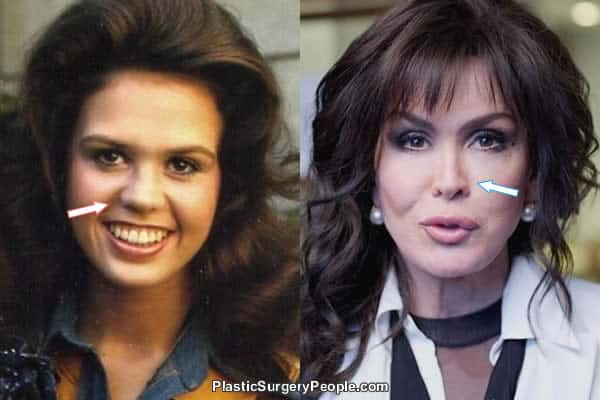 Marie Osmond’s nose shape looks very different compared to before. It used to be more round and the nose bridge wasn’t as narrow as it is now. Her nasal tip also appears to be much wider before. All these traces seems to be evidence to suggest that she could have done some form of rhinoplasty during a certain stage in her life.

Marie Osmond: Then and Now

Let’s see how Marie has changed over the years. 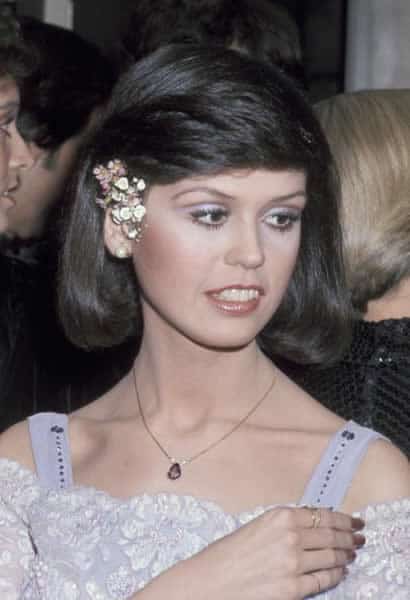 Here’s a rare picture of Marie in the 70s. She was young, fresh and absolutely beautiful in this lavender dress. She had lovely smooth white skin, big eyes and was rather thin too. This is when she appeared in the American Music Awards after she first released her country album, Paper Roses, which became a success in 1973. 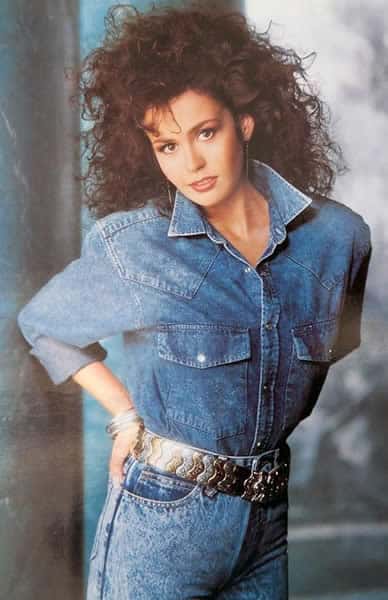 After parting with The Osmond Family Hour show, she then went on to co-star in the movie, The Gift Of Love. Marie also starred in other variety show with NBC and was enjoying a rather successful TV career before she decided to focus back on country music in 1984.

As you can see from the pic, her body was still very slender and skinny in this old fashion blue jeans. Her fuzzy long hairstyle was considered to be very trendy back in the 80s and one thing we know for sure is that she definitely didn’t need any liposuction back then. 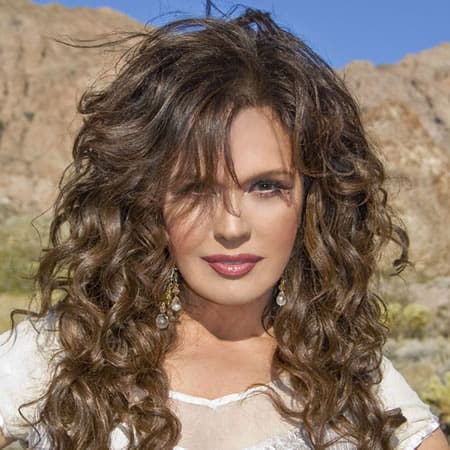 At 33 years of age, Marie Osmond looked stunning with her natural curl hair and sexy makeup. Even though she has matured into a fully grown woman, there were still no signs of aging because you couldn’t find any lines or wrinkles near her eyes and cheek area. She also had gorgeous lips back then, although the lipstick she wore helped greatly. 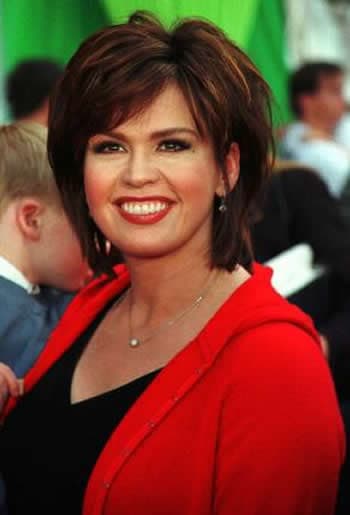 She’s now a mother of several kids, so it makes sense to look like a ‘mom’. You can almost tell that time is finally not on her side, but unless you have a picture of Marie without makeup, otherwise it’s hard to confirm those signs. Anyhow, she is still looking fantastic here, especially with that straight haircut which is very refreshing. 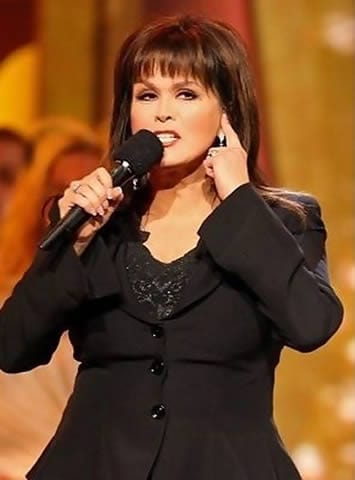 2006 has got to be the worst year for Marie in terms of her body size. Here she’s attending the TV Lands Award in Santa Monica, California, United States. She looks absolutely bloated and while we’re unsure how much weight she actually put on, but using the word “fat” would have done her justice. 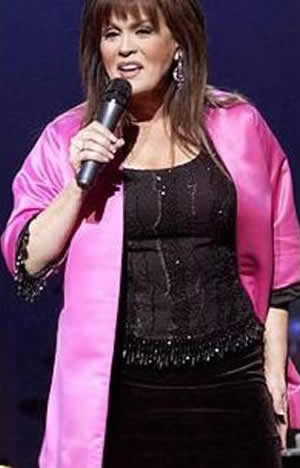 Here’s another picture showing her big tummy and even though the pixel quality isn’t that great, you can pretty much say that all the foundation, powder and eye shadows are no longer covering her age. She was 47 years old when this was taken, so yes…she was officially getting old…er! 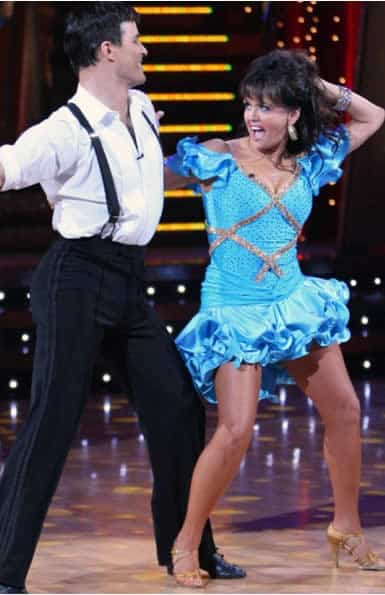 In just one year time, Marie had dropped a number of dress sizes and appeared on the TV hit show, Dancing With The Stars. Many people were shocked by the sudden weight loss. Just look how comfortable she was shaking that butt!

While she claimed it was simply exercising and a good diet, there was, however, a lot of noise of her getting a tummy tuck and possible liposuction to get rid of the body fat, especially around her stomach area.

Nice legs too by the way… 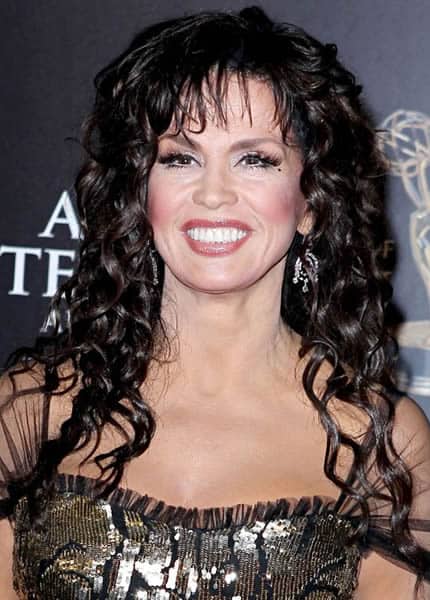 At the 37th Annual Daytime Entertainment Emmy Awards held in Nevada at the Las Vegas Hilton. Marie can be seen here with enormous signs of aging where her fine lines, eye bags and laugh lines are clearly showing. Perhaps no cosmetics and skin care can do much for a woman at 51 years of age, let alone reverse it! 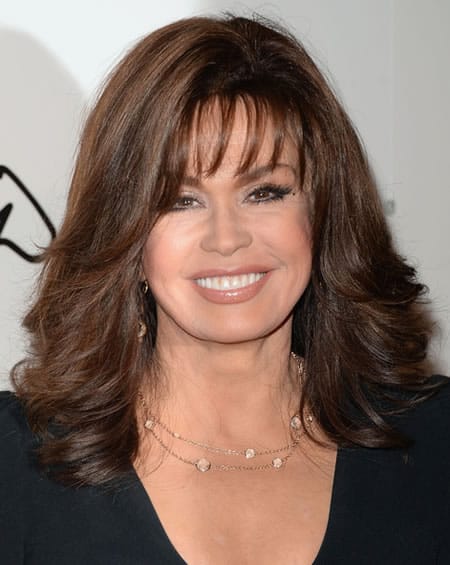 Here she is attending the BTJA Critics Choice Television Award in Beverly Hills. Something doesn’t quite add up here because if you look closely, her facial lines appear to be gone. This leads us to question whether she’s had a facelift during the 3 years since we last saw her.

And what about her lips? Can you see any signs of injectable fillers? 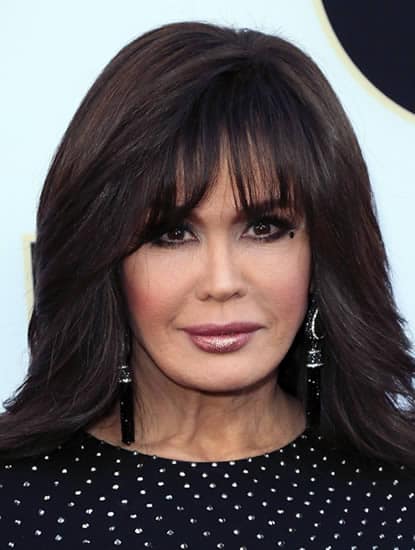 Okay, there is definitely something weird here and if we had to make an educated guess, we’ll have no choice but to scream…Botox! 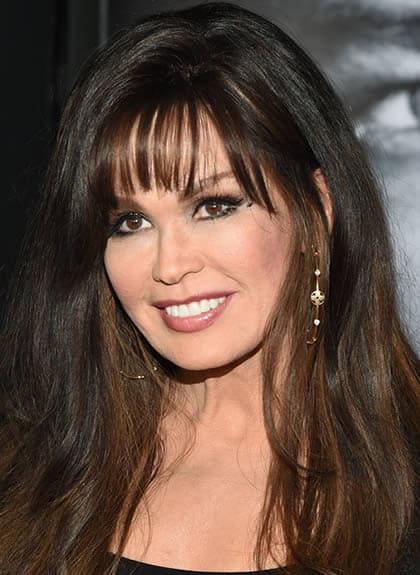 This was when Marie attended the movie premiere of ‘Jason Bourne’ at The Colosseum at Caesars Palace with her husband, Steve Craig. Now tell us….does this look like a lady who is 57 years old? 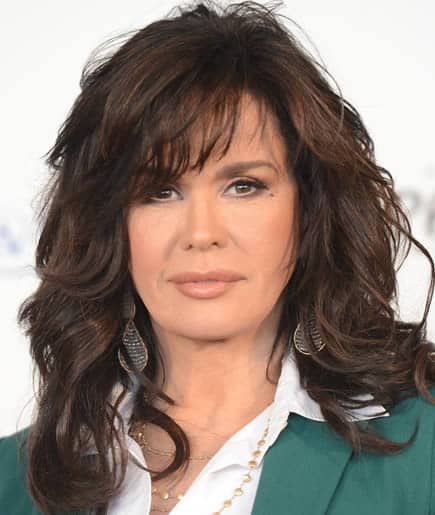 If you were to ask someone about the secret of youth, then Marie’s name is definitely on that list.

While all this may have been achieved through a plastic surgeon by artificially means, you still have to give her the nod for looking so good at her current age. Simply amazing! 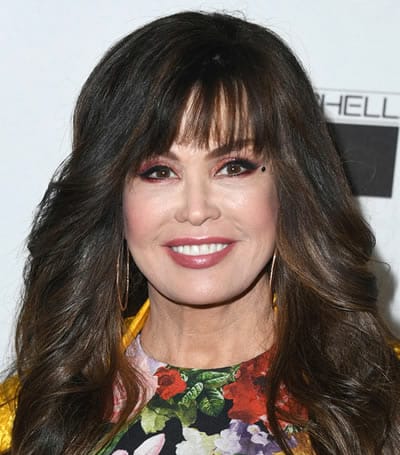 Not bad looking I must say…

For a woman in her early 60s, I think she looks fantastic.

What Does Marie Have To Say About Cosmetic Surgery?

According to her interview with Prevention Magazine back in 2011, Marie weighed in on her thoughts about using cosmetic procedures. Here’s what she said at the time…

We cherish youth more than we do wisdom. Will I do it? I’m sure. Nobody wants to have a saggy jowl. Is it bad to do? I don’t think anything is bad if it makes you feel better.

However, she has neither admitted or denied using any such procedures. Instead, she’s admitted to using a non-invasive type of skin peel technology…

I’ve had HydraFacial, which is a non-laser skin resurfacing. I had a second procedure, which was done with infrared light; it tightens the skin and stimulates collagen to make your face look more toned. And I use a lot of sunscreen.

In 2013, she suddenly came out and admitted going under the knife as reported by E News. While most people might have thought that she had breast augmentation surgery, it was actually the opposite…

I had very large breasts, I had a breast reduction. I was my mother’s daughter. I was in like, twenty something. When I did Sound of Music, all they did was talk about the hills were alive! That’s all they saw…were my boobs. I was like an E cup.

Seriously, women can get so big and you look like human zippers,” she continued. “And honestly, I did it too because my back hurt. I don’t get the big boob thing.

Besides her breast reduction surgery, Marie has never come out and openly admitted to any other types of procedures like botox. But to look this good at her current age without any help just doesn’t make much sense.

Of course, we should not only focus on her looks so here’s a video that might bring back some memories.

Yup, she was definitely talented.

Christie Brinkley: Before and After